Temba Bavuma has played only three ODIs to-date and has shared a century partnership with Quinton de Kock – 159 (opening wicket) vs Ireland, 119 (opening wicket) vs Bangladesh and 173 (second wicket) vs England – in each of these three games. The de Kock – Bavuma pair has batted together five times in all […]
By Rohit Sankar Wed, 5 Feb 2020 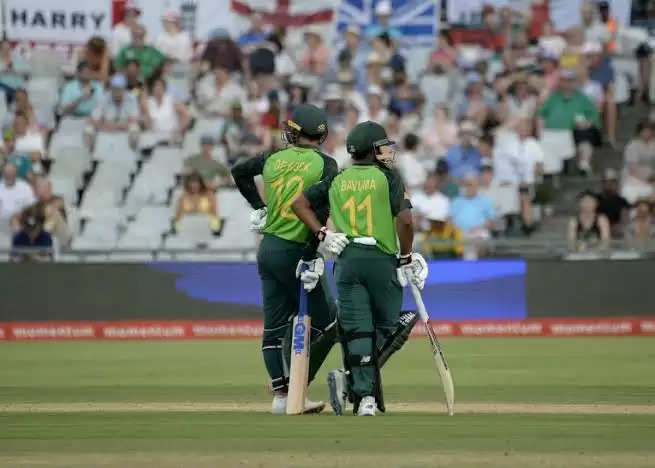 On Tuesday at Newlands on a sluggish surface, Bavuma walked in at no. 3, a role he is likely to don on a long-term basis, and put on an exhibition of One Day batting alongside Quinton de Kock. The newly anointed South African skipper was yet to find his feet when Bavuma joined him at the wicket but as the latter caressed his way through against the new ball, de Kock grew in confidence.

In the first 10 overs of the partnership, Bavuma was the more dominant partner, racing to 34 (in 35 balls) compared to de Kock’s 26. The tables soon tilted as de Kock unfurled his shots after crossing his half-century. Bavuma continued to milk the bowlers with the odd big hit – be it going back to pull Joe Denly over mid-wicket for six or Chris Woakes over fine-leg for another maximum.

A feature of the 173-run partnership that came at a run-rate of 6.15 was the manner in which de Kock and Bavuma relentlessly put pressure on the England bowlers. Since AB de Villiers’ retirement from the format, South Africa have lacked players who keep the scoreboard ticking with singles and twos and the odd boundary. Bavuma is far from being a de Villiers. However, the Bavuma and de Kock as a pair pack a counterpunch that South Africa have sorely lacked in limited-overs cricket since the big man’s retirement.

The essence of the stats is that the pair was busy and the increasing run-rate with little risks taken put pressure on England. “We weren’t able to take those wickets. And that partnership between Temba and Quinton was pretty good and hard to break, and that won them the game,” Chris Woakes said at the end of the game.

Bavuma and de Kock love batting together. Short in statures, the two have a rhythm to their partnerships that go tick with Bavuma – who is a terrific strike rotator – to tonk with de Kock – who finds the boundaries with ease. At no. 3, Bavuma seemed to be at home and it could well signify the beginning of a long-term plan for South Africa.

They have had Bavuma and de Kock at 6 and 7 or 5 and 6 in the Test line-up for long with much success. Even with the limited sample size at hand, there’s enough to suggest that this pair will be a force in limited-overs cricket too.

In India during the T20Is, the two put on an exhibition of rotating strike against spin and putting pressure on them. At Bengaluru, in four overs of spin the pair faced in their partnership, 11 singles, two doubles, two sixes and a four were scored.

At Mohali, after five dots in the opening over against Washington Sundar, Bavuma and de Kock did not play out a single dot ball to spin, scoring 16 singles and two fours.

The approach against spin is crucial for South Africa as they tend to get bogged down by the spinners. At Newlands, Bavuma paddle swept Joe Root for four while de Kock unleashed the reverse sweep and jab against the spinners. Strike rotation continued to be a theme with Bavuma looking to cut out on dots and de Kock finding the fence with regular frequency.

Having two busy players at the top relieves pressure on the middle-order where Rassie van der Dussen, David Miller, Jon-Jon Smuts or Kyle Verreynne is capable of going for the big hits. It’s too early to suggest that South Africa have already found their limited-overs formula but in the no.3 Bavuma, they have found an able partner to de Kock’s madness. Newlands was evidence of how impactful the two Lilliputians can be when batting together.