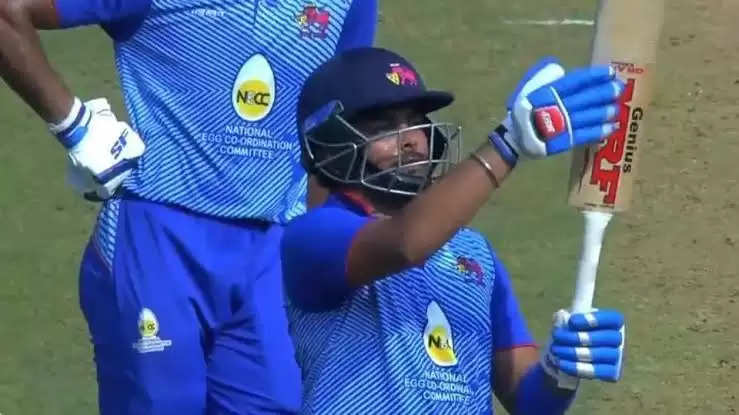 KL Rahul slammed an unbeaten 84 to help defending champions Karnataka thrash Punjab by seven wickets in a Group ‘B’ Super League game in the Syed Mushtaq Ali Trophy T20 tournament here on Sunday.
In another game, young opener Prithiv Shaw, who returned to competitive cricket after serving an eight month dope ban, smashed 64 off 36 balls as Mumbai chased down a stiff 171-run target with five balls to spare against Jharkhand.Karnataka pacer Ronit More bagged four wickets to help his team restrict Punjab to 163/6 before Rahul’s blazing 48- ball 84 enabled the team to reach the target with two overs to spare.

It was Karnataka’s third successive win in the tournament.

For Punjab, young opener Shubman Gill, who was released from the Indian Test squad, fell for 11. They also lost other opener Abhishek Sharma (5) cheaply, to be reeling at 18-2.

Skipper Mandeep Singh (76 off 50 balls) held the innings from one end and took the team out of the rubble.

Anmolpreet Singh (11) failed to convert his start as Punjab lost the third wicket with 55 on the board.

Gurkeerat Singh (44 off 32 balls) then joined his skipper in the middle as the duo conjured a crucial 88-run stand for the fourth wicket and steadied the ship.

However, More pegged back Punjab with two quick wickets as they were restricted it to 163/6.

In reply, Karnataka lost their in-form opener Devdutt Padikkal (2) early but Rahul played aggressively and hammered the opposition bowlers be it spinners or pacers.

Rohan Kadam (23) and skipper Pandey (33) also chipped in with the runs before Rahul, who struck seven fours and four sixes, took his side home in company of Karun Nair (23 not out).

Another win could help Karnataka make the semis.

In the Mumbai game, the spotlight was on Shaw, who proved his mettle, by toying with the Jharkhand attack comprising the likes of Anukul Roy and former India pacer Varun Aaron.

The pint-sized opener smashed four fours and five sixes and led Mumbai’s chase even as he kept losing partners at the other end.

Shaw fell in the 12th over, with Mumbai still needing another 78 runs, but Shivam Dube’s quickfire 23 off 11 balls, helped them near the target and then Siddhesh Lad (18 not out, Sujit Nayak (17 not out) completed the formalities.

Riding on an unbeaten 48 by middle-order batsman Azim Kazi and 47 each by opener Ruturaj Gaikwad and experienced Kedar Jadhav, Maharashtra posted a decent 165/2 before bundling out Baroda for a paltry 98.