When Saurashtra cracked the code

The inspirational leadership of Jaydev Unadkat coupled with the fearless attitude that past teams did not possess and the lesser-known players turning into game-changers resulted in Saurashtra laying their hands on the coveted Ranji Trophy. Saurashtra had become a force to reckon with over the past 10 years and the final that they won on […]
By PTI Sat, 14 Mar 2020 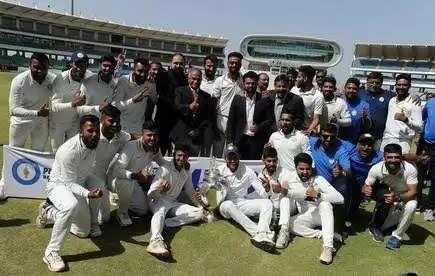 The inspirational leadership of Jaydev Unadkat coupled with the fearless attitude that past teams did not possess and the lesser-known players turning into game-changers resulted in Saurashtra laying their hands on the coveted Ranji Trophy.
Saurashtra had become a force to reckon with over the past 10 years and the final that they won on Friday was their fourth in eight seasons, yet they had to wait excruciatingly long for laying their hands on the most coveted trophy in domestic cricket.

Unadkat and Co lost the final to Vidarbha last year but the belief remained firmly intact that they were good enough to go all the way.

Saurashtra perhaps needed the ‘X factor’ to crack the final code and that was provided by their leader and lead pacer Unadkat, who turned the match on its head on day five of both the semi-final and final, ending the competition with 67 wickets at a remarkable average of 13.23. He had 39 scalps at 17.17 last year.

More than the numbers, it was his ability to come up with breakthroughs when his team needed them the most, like on Friday when he ended a threatening 98-run stand between Anustup Majumdar and Arnab Nandi to get the title-winning first innings lead.

“I was telling myself that if I could challenge myself and bowl the ball of the season. I was telling myself before every single delivery,” said Unadkat, when asked about his mindset going into day five with Bengal needing 72 runs and two well-set batsmen in the middle.

“The dream season could only have been special if you actually win the title. At the end, we had had three defeats in finals and it doesn’t feel good. It is a long season where you have put your blood and sweat. This season, I have given everything mentally and physically. I wouldn’t have enjoyed any sort of record if I hadn’t won. I wanted to do it one more time for my team,” he said.

ALSO READ: Highlights from Saurashtra’s title win
Unadkat’s sensational run in the tournament, the performance of the lesser-known stars went a long way in Saurashtra securing the trophy.

Southpaw Arpita Vasavada, who scored a hundred in both semis and final; all-rounder Chirag Jani; opener Harvik Desai; veteran Sheldon Jackson, who amassed 800 plus runs for the second successive season. They all made the difference in the end.

With Ravindra Jadeja away on national duty, left-arm spinner Dharmendra Jadeja kept the pressure up from one end, taking 32 wickets. He had picked up 59 scalps 12 months ago. Even Pujara when he was available chipped in, scoring 575 runs at 63.88.

His partnership with Vasavada set up up the final for Saurashtra. Pujara’s 66 off 237 balls is one of his slowest knocks in domestic cricket but had immense value in the context of the game and it came as he battled fever and sore throat.

Talking about his effort a day after he had to leave the field due to illness, Pujara said: “It was very tough on me. I am someone who likes to lead from the front, but here, I had to bat lower down the order.”

“Day two when I walked in, it was not easy. I felt a blackout, so it was tough. But you have to be motivated and lead from the front, set a good example. Once you had 350 plus, we knew with our remarkable bowling attack, we were in a good position.”

Niraj Odedra, who has played for Saurashtra and been with the team as a coach since 2015, listed our reasons why Saurashtra became champions.

“You got to understand that this team was doing well earlier but it was heavily dependant on star players. One season, it was Ravindra Jadeja who did exceptionally well, another season it was Pujara,” recalled Odedra.

“We were making the finals regularly but we were relying it on big players but this season the whole batting unit clicked,” Odedra. “This is the first season when we performed as a unit,” he added.

The mindset also matters a lot when one is chasing trophies and that is where Unadkat, who was made captain in the middle of last season, brought in a major shift.

“The past Saurashtra teams (including the ones he played in) were sometimes happy with a draw but this team under Jaydev was going for the win in each and every game. When Bengal scored 90 runs in the final session on day four (and looked set to take first innings lead), not a single person in the team believed that they will not win.”

For Odedra, the captain leading by example was the best thing that happened for the champions.

“Jaydev had put in so much the whole season and nobody could take that away from him. Credit to him for bringing this brand of cricket to this side. People think fast bowlers don’t do a lot of thinking but he is one of the smartest cricketers around. Everything that he planned, more or less, it worked for us,” said Odedra. PTI BS