After a riveting Test series between England and the West Indies, which started off with a nervy 4-wicket win for the visitors, thereby promising a competitive series up ahead, and ended with a 4-man England fast bowling attack making merry over the West Indies batting line-up, with match referee Chris Broad’s son entering the elite […]
By Rajarshi Das Thu, 30 Jul 2020 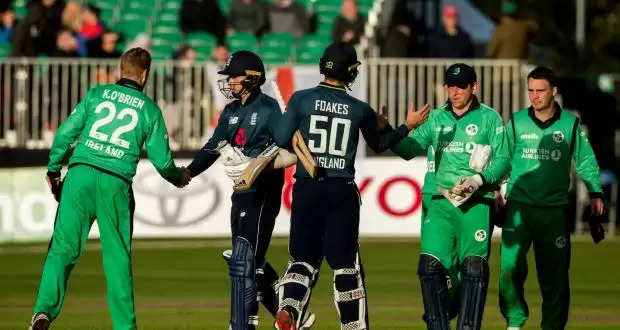 After a riveting Test series between England and the West Indies, which started off with a nervy 4-wicket win for the visitors, thereby promising a competitive series up ahead, and ended with a 4-man England fast bowling attack making merry over the West Indies batting line-up, with match referee Chris Broad’s son entering the elite 500 Test wickets club, the World Champions, with a completely different set of members in their squad, will don coloured clothing and enter the Ageas Bowl to take on British rivals Ireland in the first of the three One Day Internationals, the first International white ball Cricketing contest since lockdown.

The previous instance of these two sides competing against each other in ODI Cricket was at Dublin in May last year. Fan favourite Ben Foakes, with the help of all-rounder Tom Curran (47* off 56), ensured a tense victory for England with 4 wickets and 3 overs to spare in a curtailed match. The Colchester-born wicketkeeper, after a nervy start, made an unbeaten 61 off 76, after England lost their top order with 133 runs to get, largely due to left arm quick Joshua Little, whose spell of bowling, impact wise, can be best described as an antonym for his last name. All of this took place after a combined bowling effort from England restricted Ireland to 198, Liam Plunkett and Tom Curran being the pick of the bowlers with 4 and 3 wickets for 35 runs each.

Tomorrow’s game will also mark the beginning of the newly launched men’s Cricket World Cup Super League by the ICC. Much like in the women’s game, the ICC men’s Cricket World Cup Super League will act as qualification for the World Cup in 2023. The teams to finish in the top 7 of the table will automatically qualify for the World Cup. Each side will play eight three match One Day International series, 4 each at home and away.

The captains of the two sides weighed in their opinions on the same. This was what they had to say.

Eoin Morgan: We’re looking forward to playing cricket again and to the ICC Men’s World Cup Super League. Given the situation, it will be quite different to the last time we played at home, when we lifted the World Cup at Lord’s, but it’s nice to be starting our journey for the next edition of the tournament.
I’m sure cricket fans all over the world will be excited to see white-ball cricket resume and we’re looking forward to the challenge. Ireland are a talented team who have shown over the years that they can beat the best on their day. We look forward to what promises to be an interesting series.

Andrew Balbirnie: It’s a privilege to be playing in the inaugural series of the ICC Men’s World Cup Super League. It is obviously going to be a huge challenge taking on the team that won the World Cup just a year ago but we have prepared well and have taken confidence from our form over the early months of 2020.
What is important is that we are getting back on the field. I hope international cricket’s return is steady during these challenging times. I look forward to the Irish side putting on a good performance in the upcoming series as we start our campaign for World Cup qualification.

The first time these two sides met in ODI Cricket was way back in 2006 at Belfast, a game which saw Ireland making their One Day International debut.  The debutants did put up a good fight, but they fell well short of the target of 302 set by England, which was powered by a hundred from Marcus Trescothick and a 101 ball 80 from Ian Bell.

The following instance of the two sides meeting each other in a One Day International took place in the ICC Cricket World Cup in the West Indies the following year. Although England won the game quite comfortably, the margin being 48 runs, the match would be remembered for other reasons. Ireland’s left-handed batsmen heavy top order consisted of an eventual World Cup winner for England. This was Eoin Morgan’s only International match against England. Other than Morgan, there were two other individuals in either side who played in both England and Ireland kits.

One of them was Ireland’s tall, lanky pacer Boyd Rankin, who moved to England in 2012 with the hope of playing for them. He got the opportunity to do so in the span of 2013 to 2014, before moving back to the country of his birth and representing them in International Cricket to this date. The other individual happens to be Ed Joyce, who made his International debut for England against his mother country.

The next few England-Ireland One Day International encounters ended in thrilling finishes, out of which the most notable game was the one in the 2011 World Cup at Bengaluru. Kevin O’Brien took the attack to the England bowlers and etched his name into the Cricket record books with the fastest hundred by a player in World Cup Cricket. Ireland chased down 328 with 5 deliveries to spare, sparking frenzied celebrations in their camp.

The sight of Mooney wildly throwing his bat in the air and screaming his lungs out after hitting the winning runs is one for the compilation of the greatest Cricketing moments of all time.

That remains the only victory for Ireland over England in 50 Over Cricket out of the 10 matches played between the two teams. Barring that game, and a washout in 2015, England have emerged triumphant on every other occasion.

Jonny Bairstow and Moeen Ali, who were originally a part of the England Test squad, were released for the ODI series. Both of them looked in scintillating form in the intra-squad One Day game between Team Morgan and Team Moeen.

Bairstow, playing in the side led by Moeen Ali, bludgeoned an 88 ball 127 decorated with 7 over-boundaries and 16 hits to the fence. Moeen Ali was instrumental with both bat and ball, scoring 85 with the bat and picking up 3 wickets. It is very much likely that both of them will make England’s playing XI.

James Vince looked in good touch in the England Lions-Ireland warm up game. He notched up 66 quick runs with 12 fours before making way for the others to bat. The same game saw Sam Billings finish the run chase within the 35th over with a 36 ball 54. The fact that Billings keeps wicket also adds to his advantage, as the England selectors might consider him as a like-for-like substitute for first-choice keeper Jos Buttler.

Despite not making much of an impact in national colours in the recent past, England might consider playing Tom Curran due to his ability to land yorkers at will while bowling at the death, and the fact that he can hit the ball a long way. Liam Dawson has bowled well enough in the practice matches, picking up 6 wickets in total, to merit a place in the side. The demand of a wrist spinner in One Day Cricket in today’s times makes Adil Rashid, who had a good outing in South Africa earlier this year as well, an automatic choice.

Economic spells from Reece Topley in the warm up games might help his case, which would mean the spot for the other opening bowler is open for either David Willey, who bowled miserly spells as well, or the highest wicket taker in last year’s Royal London One Day Cup, Lancashire’s Saqib Mahmood.

Ireland last played One Day International Cricket against the West Indies in the Caribbean earlier this year. Barring the second game, the visitors went down without a fight in the series, losing 3-0. Since then, due to the COVID-19 pandemic, Ireland have had plenty of bilateral matches postponed or cancelled. A good sign for Ireland is that their experienced campaigners have looked in good touch in the 2 practice matches played by the squad. William Porterfield, captain Andrew Balbirnie who took over the leadership duties from Porterfield last year, Paul Stirling, and Kevin O’Brien have all notched up good scores in the two games.

Youngsters Gareth Delany and Harry Tector are rated quite highly among the people in the Irish camp.

Out of the 28 One Day Internationals played at the Rose Bowl, half of the occasions have ended with a side successfully defending their first innings total. Although, with the kind of depth in England’s batting line-up, something that their opposition lacks, they would not mind chasing. The focus will mainly be on the quality of depth in the England squad; how the fringe players fare without most of their first choice members in the squad.