West Indies dominated both with ball and bat on the second day of the first Test match against England at Rose Bowl. West Indies skipper Jason Holder registered his career-best bowling figures with 6/42, whilst the other four wickets were bagged by Shannon Gabriel. They displayed disciplined bowling to skittle through the English batting line-up […]
By Charudatt Prabhu Thu, 9 Jul 2020 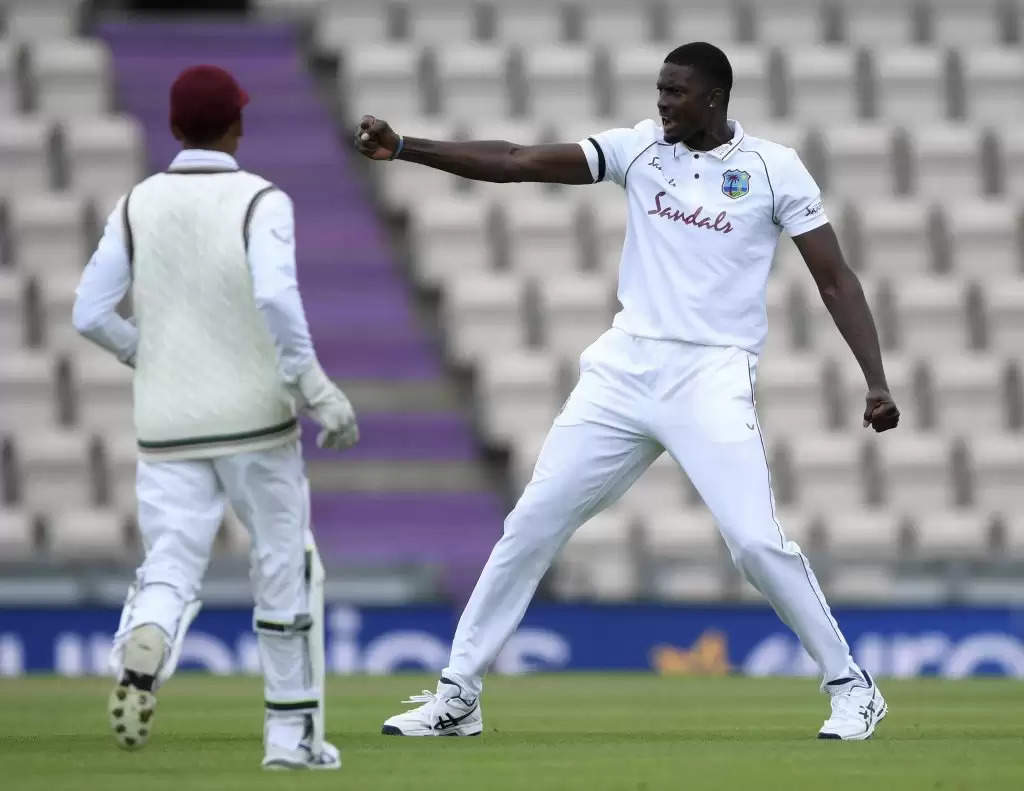 West Indies dominated both with ball and bat on the second day of the first Test match against England at Rose Bowl.

West Indies skipper Jason Holder registered his career-best bowling figures with 6/42, whilst the other four wickets were bagged by Shannon Gabriel. They displayed disciplined bowling to skittle through the English batting line-up in 67.3 overs for 204 runs.

Gabriel, with his fine bowling, claimed two quick wickets, which put his team in a great position. He first broke through Joe Denly’s defence by shattering the stumps with an in-decker and then hit Rory Burns, who missed a flick, on the pads. Umpire Richard Kettleborough denied the appeal, but DRS proved his decision wrong. The overnight batsmen were back in the shed but West Indies continued to station three slips and a gully.

Soon, the 6`7 tall Holder beautifully set-up young Zak Crawley after bowling a few outswingers to nip one back in. Kettleborough’s decision was again overturned. England were 71-4. And five down in no time, as Ollie Pope fell to Holder by edging a length ball to wicketkeeper Shane Dowrich.

When captain Ben Stokes and vice-captain Jos Buttler were in the middle, the visitors looked a tad sloppy as they leaked runs. The two seniors stitched a 50-run partnership.

Ben Stokes and Jos Buttler have put on yet another half-century stand.

Since 2018 (till before this game), they are the best pair for the 5th wicket or lower in Tests with 720 partnership runs.#ENGvWI pic.twitter.com/SMxbKaEJ5a

Buttler looked solid in his defence. His back-foot punch to Gabriel for four was a treat to the eyes, whereas, on the other hand, his partner, Stokes took his time, to score runs.

Andy Roberts, as Michael Holding mentioned, had said that Kemar Roach was the best bowler when it comes to bowling to left-handers. Roach showed that while bowling to Stokes. Although, he did not get the leftie out, he made him struggle. The England captain came out of the crease on many occasions, perhaps to play the ball fuller, or maybe to unsettle the rhythm of bowlers. But, this tactic proved costly, as his counterpart found the outside edge of his bat when he was on 43 off 97.

Shortly after, Buttler, on 35 (47), followed suit, edging Holder to Dowrich, who stretched to his right to complete a one-handed catch. As dark clouds hovered in Southampton, England found themselves in deep waters.

As the tail-enders kept falling at one end, the lone spinner of the England bowling line-up, Dom Bees scored a quick fire 31 to see his team through the score of 200.

Later in the day, West Indies openers, Kraigg Brathwaite, as is the norm, and John Campbell did well to play out the new ball.

Kraigg Brathwaite's job is to blunt the new ball.

In Tests since 2010, he has faced the 4th most number of balls by an opener (averaging 76.5 balls per innings) and has the 2nd lowest strike rate for any batsman (4000 balls faced).#ENGvWI #ENGvsWI #Cricket pic.twitter.com/LblXPotRzV

They took advantage of the attacking field – 5 slips – set by England, by regularly rotating the strike. James Anderson gave the first breakthrough by trapping Campbell below the knee roll. For the first time in six reviews, West Indies were wrong and they lost their only wicket in the day.

Due to bad light, the play was stopped with more than 25 overs left in the day. At stumps, West Indies are 57-1, trailing by 147 runs. An exciting day of cricket awaits as the batsmen will look to get past the deficit and the bowlers will look to hunt wickets..