IND v SA: Keshav Maharaj hoping to test himself against the best

South Africa’s most experienced spinner Keshav Maharaj wants to be as consistent as seasoned Indian duo of Ravindra Jadeja and Ravichandran Ashwin during the upcoming three-Test starting on Wednesday. The orthodox left-arm spinner with 94 wickets from 25 Tests had a successful county performance and is hoping to make life “uncomfortable” for the Indian top-order. […]
By PTI Mon, 30 Sep 2019 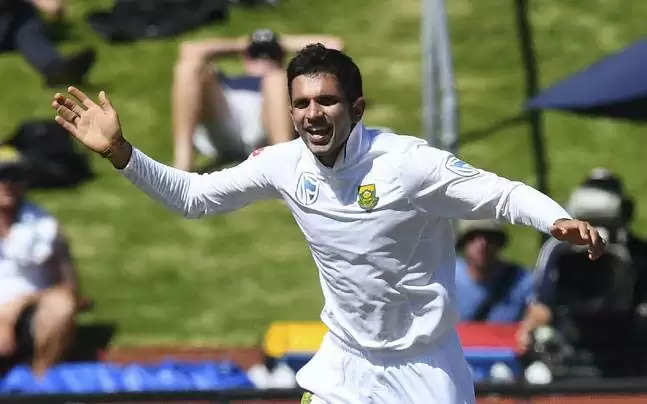 South Africa’s most experienced spinner Keshav Maharaj wants to be as consistent as seasoned Indian duo of Ravindra Jadeja and Ravichandran Ashwin during the upcoming three-Test starting on Wednesday.

The orthodox left-arm spinner with 94 wickets from 25 Tests had a successful county performance and is hoping to make life “uncomfortable” for the Indian top-order.

“It is nice that people speak highly of you. Look at Jadeja and Ashwin. Ashwin has got a lot of variations and Jadeja keeps it simple but the key is consistency and that make it uncomfortable for the batsmen. I can (want to) emulate that going forward and do my job from one end,” said Maharaj, who is on his maiden Test tour of India.

Spin will hold key but reverse swing can also play a huge role in the series, he said.

“You got to expect the ball to turn in the sub-continent and that is why people carry an extra spinner here. As far as bowling to Indian batsmen goes, you can only Test yourself against the best. The series will tell me how good I am and if I belong here in international cricket,” Maharaj said.

“Besides spin, reverse swing will be key. Every bowling unit everywhere in the world likes to utilise if reverse swing is available. India have got strong bowlers including Mohammad Shami, who is unplayable at times. If it starts to reverse, then we have also got amazing bowlers, who can utilise the conditions.”

India will be without the the services of their lethal weapon Jasprit Bumrah, who was ruled out of the series due to a stress fracture in the lower back. Maharaj said India will miss him badly.

“It is a big loss for India. He has turned the whole Test side for India in terms of playing in various conditions but lets face it India have enough quality to replace him. Umesh Yadav is another world class bowler.”

South Africa got a decent hit in the middle in the one-off practice game despite the rain with Aiden Markram (100), Temba Bavuma (87) and Philander (47) getting some much needed in the middle. Maharaj struck thrice in that game.

“It was important that our batters got some time in the middle. They have been working on how to tackle Indian conditions and it is nice to get a hit.”

South Africa were hammered in India four years ago with Jadeja and Aswhin wreaking havoc.

Maharaj said the new look South African team is not dwelling over the past.

“If you look at the freshness in the side, there is a hell lot of a new faces and that can work for us. There is no point looking back and things may not got our way. But we are here to compete,” he added.