First things first. This is Bangladesh’s first big tour of India. While they toured India for a one-off Test in 2017, it will be their first ‘series’ including both Tests and T20Is in India. India and Bangladesh have barely played any cricket in India. Bangladesh came down for a tri-series in 1998 along with Kenya […]
By Sahil Jain Sat, 2 Nov 2019 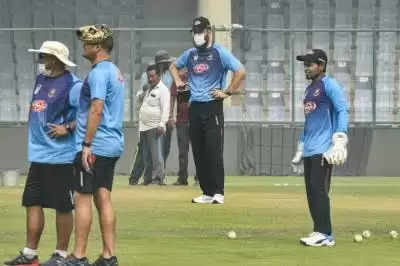 First things first. This is Bangladesh’s first big tour of India. While they toured India for a one-off Test in 2017, it will be their first ‘series’ including both Tests and T20Is in India. India and Bangladesh have barely played any cricket in India. Bangladesh came down for a tri-series in 1998 along with Kenya but apart from that there has never been an ODI hosted in India. The only T20I Bangladesh played against India in India was during the World T20 in 2016. It is their first big full tour of India.

Ever since the India-Bangladesh quarter-final in the 2015 World Cup, this is a rivalry that has picked up. Bangladesh have come leaps and bounds in international cricket while India have continued to dominate most of the bilaterals. However, T20 is a format that hasn’t been the best for either team.

India have been very scratchy in the shortest format. They have won just one T20I series this year which came against West Indies (3-0) in the USA and the Caribbean. Apart from that they’ve lost 1-2 against New Zealand and 0-2 against Australia at the start of this year. They drew 1-1 against South Africa at the start of this home season. Hence, the ‘Men in Blue’ have blown hot and cold and it won’t be wrong to say T20 is their weakest format.

On the other hand, Bangladesh may have made giant strides in international cricket but T20 remains a bit of a miss. Since the World T20 in 2016, they’ve won just nine out of the 27 T20Is they’ve played. The Bangla Tigers have shown some improvement as they won three out of the four completed games in the recent tri-series involving Afghanistan and Zimbabwe. However, a bigger and a stiffer challenge awaits.

There’s a lot happening around this series. First, the Bangladesh players went on a strike which put the series/tour in jeopardy. There was peace made between the Bangladesh Cricket Board (BCB) and the players which gave a green signal to this tour. Shakib Al Hasan, their best player, captain and talisman got banned. The second Test got changed to a day-night encounter. The first T20I in Delhi was almost shifted out due to the pollution and reduced air quality.

With all this, the tour will kick off with a three-match T20I series and it’s become clichéd to say, ‘with one eye on the 2020 T20 World Cup’. India continue to chop and change here and there. While Virat Kohli is rested, they have decided to do away with Ravindra Jadeja for the time being. Navdeep Saini has faced the axe too. Shardul Thakur comes in while Yuzvendra Chahal makes a comeback to the shortest format. There are plenty of questions and also opportunities for India. While Kohli, Jasprit Bumrah and Hardik Pandya (the latter two out with injuries) not present in the team, it throws new opportunities to various players.

Shivam Dube has got a maiden call-up and might get a shoo-in straight-away, considering the absence of the younger Pandya. Meanwhile, the likes of KL Rahul and Manish Pandey or even Sanju Samson might get to bat at 3 in the absence of Kohli. The Indian pace attack bench strength goes through another test.

However, the batting continues to wobble. Plenty of questions remain. Is Shikhar Dhawan the right man to partner Rohit Sharma at the top? Does Shreyas Iyer fit into the T20I team? For how long will KL Rahul sit out, given his excellent record in T20Is? Where should Rishabh Pant bat?

Talking about Pant. Irrespective of what he does, there is spotlight on him. He’s blown hot and cold massively and his shot-selection has always been under the scanner. Hence, most say, it is a big series for him with the likes of Samson and Ishan Kishan lurking around.

As far as Bangladesh are concerned, they look like a depleted side. Their best player, Shakib has been banned. Tamim Iqbal will miss this tour as he has decided to stay with his wife who is expecting the birth of their second child. Promising all-rounder Mohammad Saifuddin has been ruled out due to a back injury.

The battle between Mustafizur Rahman and stand-in Indian skipper Rohit Sharma will be an intriguing one. The Mumbaikar has had the better of the left-arm pacer on most occasions. He has scored at a strike-rate of nearly 160 against Bangladesh’s premier fast bowler in T20Is. But Mustafizur has dismissed Rohit twice in T20Is and thrice in ODI cricket.

To be updated soon

Bangladesh have never beaten India in a T20I. They’ve come close on a couple of instances but have not been able to get over the line. India hold an 8-0 record against Bangladesh which is the second-most one-sided contest in the history of T20Is after Pakistan-Zimbabwe (9-0). Hence, the visitors face an uphill task, especially without a few key players. India are missing a few players as well but they will start as overwhelming favourites.