Staying true to his words, young Sarfaraz Khan stuck his maiden triple century to single-handedly give Mumbai the crucial first-innings lead and grab three points on the last day of their Elite Group B Ranji Trophy match against Uttar Pradesh here on Wednesday. Uttar Pradesh had posted a humongous 625/8 declared in their first-essay courtesy […]
By PTI Wed, 22 Jan 2020 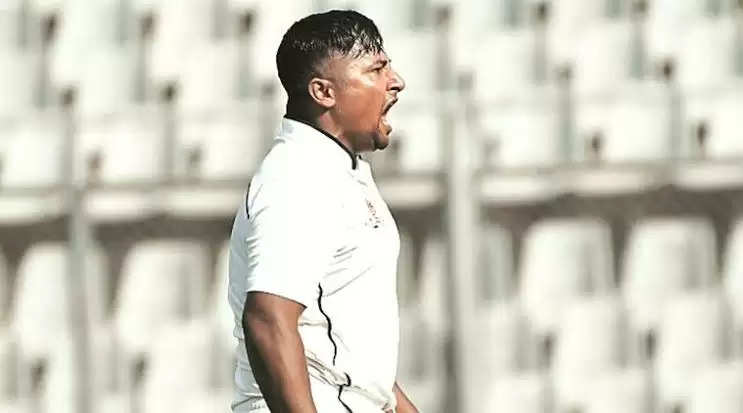 But Sarfaraz Khan’s (301 not out off 391 balls; 30×4; 8×6) herculean task overshadowed Yadav’s double-ton on a flat track, which had absolutely nothing for the bowlers even on the final day.

Right-handed Sarfaraz was the cynosure of all eyes at the Wankhede Stadium, as he batted for as long as 633 minutes and hammered 30 fours and eight sixes.

What is more special about his knock is that the pint-sized batsman was suffering from fever two nights ago, but he came out to bat and did the job for his team.

Sarfaraz, who had played for Uttar Pradesh and returned to Mumbai, had all shots in the book.

But more importantly, contrary to his style, he showed restraint and respected the good balls.

Sarfaraz, in the process, became the seventh Mumbai batsman to score a triple ton in first-class cricket and joined the illustrious list comprising Wasim Jaffer (301 and 314 not out), Rohit Sharma (309 not out), Ajit Wadekar (323), Sunil Gavaskar (340), Vijay Merchant (359 not out) and Sanjay Manjrekar (377).

The hosts resumed the final day on overnight score of 353/5 needing 273 more runs to overhaul Uttar Pradesh’s first innings total, with 22-year-old Sarfaraz unbeaten on 132 in company of his skipper Aditya Tare, who was unbeaten on 9.

Also Read:  Shastri: Winning a World Cup is an obsession for India

Mumbai had a difficult task at hand, but the way Sarfaraz, who had faith in his abilities, built his innings, was remarkable.

Sarfaraz and Tare tore into a listless UP attack, as they were determined to fetch three points.

They ensured that the first session remained wicket- less, as Mumbai went into lunch at 434/7.

Tare played a perfect second fiddle, as they duo launched a counter-attack.

While Sarfaraz and Tare added 179 runs for the sixth wicket, he and Mulani added 150 runs for the seventh wicket and it was their partnership that ensured Mumbai crossed Uttar Pradesh’s first-innings total.

Sarfaraz, who had completed his individual 250, took a single, as Mumbai surpassed Uttar Pradesh’s mammoth total and celebrated like the team had won the match.

Then Mumbai allowed Sarfaraz to complete a well- deserved 300.

He completed his triple ton with a six over wide long on, after which the match was called off.

Uttar Pradesh bowlers struggled on day three and four and had an off-day in the field.

They were able to take only take two wickets on the final day.

Also Read:  Prithvi Shaw, Samson shine as India A beat New Zealand A by 5 wickets
In the history of Ranji Trophy, only one higher total was surpassed in 1981-82 season when Karnataka made 705 and Delhi replied with 707/8.

Mumbai play Himachal Pradesh next in away encounter at Dharamshala, and Sarfaraz’s innings would have given the 41- times Ranji Trophy champions confidence that they can make the knock-outs.