Virat Kohli was visibly disappointed after being adjudged leg-before on Day 1 of India’s warm-up game against Leicestershire on Thursday, June 23.
By CX Staff Writer Fri, 24 Jun 2022 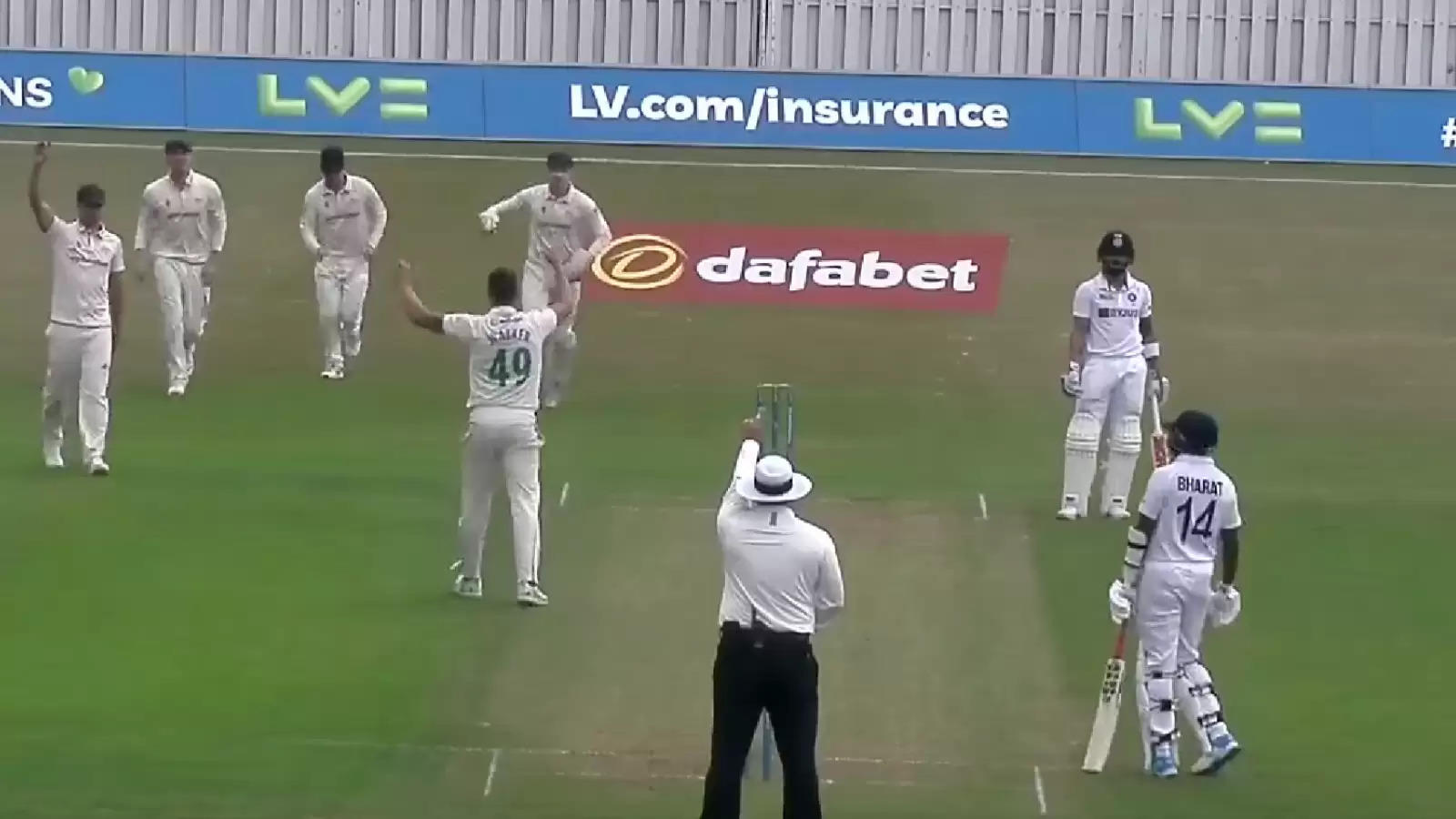 Indian batsmen had a tough time on the opening day of their warm-up game against Leicestershire, with right-arm quick Roman Walker bagging a five-for to dent their progress.

The most significant of those was that perhaps that of Virat Kohli, who battled for a 69-ball 33 before being adjudged leg-before in the 41st over of the innings. Kohli went across the line for a flick to a full-length ball, but missed it and the bowler and the fielders went up in unison. The umpire raised his finger, much to the batter’s disappointment, who questioned the call in an extended chat with the official, before walking back disappointed.

Kohli might’ve got a thin inside edge, or would've perhaps thought that he was struck outside the line. The ball appeared to have seamed away on pitching too, adding another possible reason for Kohli’s delayed walkback. India were 138/6 at that point.

☝️ | Kohli (33) lbw Walker.@RomanWalker17 strikes again! This time he hits the pads of Kohli, and after a long wait the umpire's finger goes up.

Earlier, India opted to bat, with four of their players - Cheteshwar Pujara, Rishabh Pant, Jasprit Bumrah and Prasidh Krishna - in the opponent’s camp for the game.

Bumrah had Rohit down with one that hit the batter on the box, calling for a physio, before the Indian captain could resume his innings. Shubman Gill edged one behind off Will Davis on 21, while Rohit (25) and Vihari (3) were dismissed by Walker, who is yet to play a first-class game, in quick succession.

Shreyas Iyer edged one behind off Krishna, before Jadeja was trapped leg-before by Walker to leave the tourists at 81/5. Wicketkeeper batter Srikar Bharat added 57 with Kohli before the latter’s dismissal.

Shardul Thakur (6) shouldered one to see his stumps shattered to help Walker complete his five-for.

Bharat held his end strong, and added crucial runs with Umesh Yadav (23) and Mohammed Shami (18*) to help India to 246/8 as rain forced early stumps. Bharat has struck eight fours and a six in his unbeaten 70 thus far.