England and West Indies will be competing in future Test series’ in a newly named contest, the Richards-Botham trophy, named as a tribute to two of the finest players of all time, whose rivalry and friendship embodies the close relationship and mutual respect between the two sides. According to the Cricket Boards of both teams, the […]
By CricXtasy Staff Fri, 24 Jul 2020 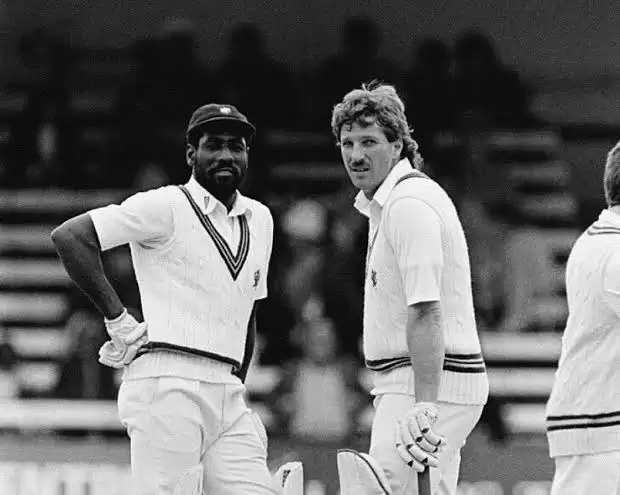 England and West Indies will be competing in future Test series’ in a newly named contest, the Richards-Botham trophy, named as a tribute to two of the finest players of all time, whose rivalry and friendship embodies the close relationship and mutual respect between the two sides.
According to the Cricket Boards of both teams, the ongoing Test series between the two sides will be the last time the two teams compete for the Wisden Trophy.

The new trophy is named after both former West Indies captain, Sir Vivian Richards and England all rounder and a cult hero, Sir Ian Botham. Richards, who saved his best for England every time the two sides met, has had an illustrious career. Over the span of 121 Test matches, he scored over 8,500 runs, including the then fastest Test hundred against the mentioned opposition at Antigua, his hometown. Botham, who is widely considered to be one of England’s greatest sportspersons, scored more than 5,000 runs and took 383 wickets in his 102 Tests. The pair have played together for English County side Somerset for years, right from Richards’ first visit to England. Fierce competitors on the pitch, the pair developed great friendship off it which still endures, and the new trophy is a fitting way to celebrate the warm relationship between the nations and to honour the gladiatorial spirit of contests past and present.

The Wisden Trophy, which was first introduced in 1963 to commemorate the 100th edition of the Wisden Cricketers’ Almanack, will now be retired and kept on display at the MCC Museum at Lord’s, where it has been kept traditionally.

This was what the two legends of the game had to say on the renaming of the contest.
Sir Vivian Richards: “This is a huge honour for my good friend Ian and myself. I am delighted to know that the game that I have shown my love for since a little boy is naming such a prestigious award in my recognition of what I managed to achieve as a cricketer. When I had the opportunity to go to England and represent Somerset, one of the first persons I met was Ian Botham, who would later become of one my best friends. We are friends for life. To have this trophy, West Indies vs England, named in honour of our work on the cricket field is great. What I think is also remarkable is that it says a lot about our relationship off the field as well. We were competitors on the field, but we showed we were brothers off the field. I’m proud to have my name on one side of the trophy with him on the other side.”

Sir Ian Botham: “Viv was the finest batsman I ever played against. He’s a great friend but we’ve always been competitive, not least when we were on the cricket field, and there was no one else’s wicket I would treasure more. Playing the West Indies was always one of the toughest tests in cricket, and it’s an honour for this trophy to bear our names. I hope future series will be just as exciting as the one we’ve all been enjoying this summer.”

England and Wales Cricket Board chairperson Colin Graves said, “England and the West Indies have produced many magic cricketing moments over the years, and this series has been no different even though it’s been played in very different circumstances. We remain very grateful for West Indies travelling here to play this series, and it’s fitting that we’ve got such an exciting final test in store as the teams compete for the Wisden Trophy for the final time. “The Wisden Trophy was introduced nearly 60 years ago to mark the 100th edition of the Almanack, and we’ve been extremely proud to contest it since then. Both we and Cricket West Indies felt that the time was right to honour two of our greatest modern players. Sir Vivian and Sir Ian were fierce competitors on the pitch but great friends off it, exemplifying the spirit of the contests between our two cricketing nations and providing perfect inspiration for those who compete for the Richards-Botham Trophy in years to come.”

Ricky Skerritt, President of Cricket West Indies, said, “Sir Viv’s phenomenal West Indies track record against England, both as a player and captain, and his longstanding friendship with his former Somerset teammate and England rival, Sir Ian Botham, presented an excellent opportunity to honour two uniquely suited living legends. Both honorees put their heart into the game, and always gave their all for their teams and countries. There are other West Indian cricket legends whose names could also have been chosen for this honour, but none more deserving than Sir Viv.”