IPL 2022: Everything wrong with the Mumbai Indians 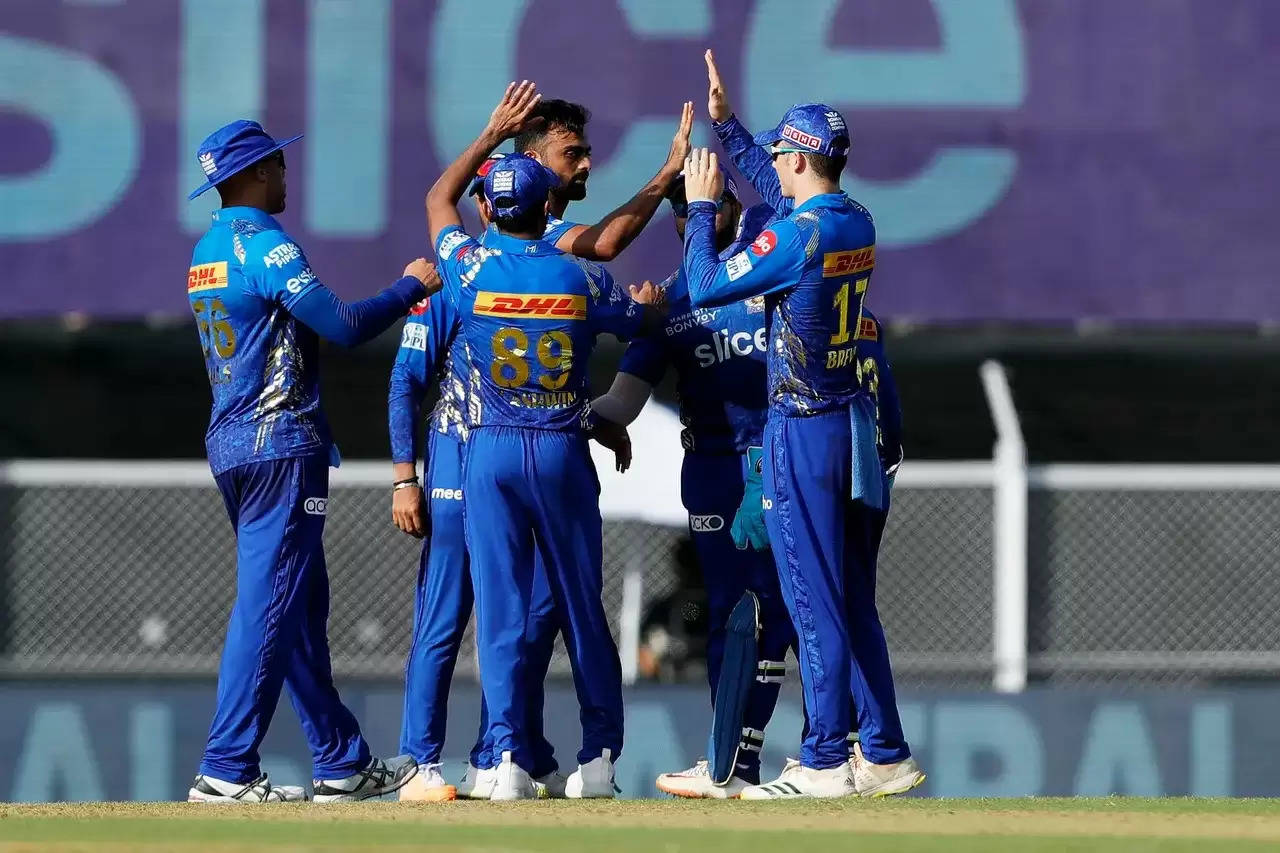 Mumbai Indians are currently placed at the bottom of the points table.

Mumbai Indians are famously known as slow starters - a narrative that has statistical backing given that Mumbai Indians have never won the first game of an IPL season since 2012. Every season, they go down at the start of the tournament, only to rise again later on. They even managed to qualify for the playoffs after losing the first five matches in 2014.

However, they have surpassed their own reprehensible record from 2014 and suffered six consecutive defeats this season now. While they are known to not panic, there seems to be some sense of urgency in the camp this year after the horrible start.

What's gone wrong for Mumbai Indians though this year? We'll dissect their season so far.

Mumbai Indians haven't managed to get going after the powerplay in almost every game. It's not that the MI openers haven't provided a stable start to the team. On four occasions, they have managed to post 45 or more in the first six overs.

But, instead of building on a steady start, Mumbai Indians have rather gone down the hill in the middle overs. Apart from slowing down significantly, they have also lost a plethora of wickets. The openers, particularly Rohit Sharma, have not managed to survive much post powerplay, and the absence of Suryakumar Yadav in the initial matches did not help them either.

Their run rate has been below 8 in four of the six games and has lost as many as 17 wickets in this phase. 76.47 % of total wickets have fallen in those four matches only. For instance, after being 49/0 in the powerplay, they shrank to 92/6 by the end of the middle overs against Royal Challengers Bangalore.

53/0 to 118/3 against Delhi Capitals and 35/1 to 85/3 against Kolkata Knight Riders are other few examples of their incompetency in this phase.

In the middle overs, Mumbai Indians have the worst strike rate (125.62) and balls-per-boundary ratio (7.2) this season so far. On average, they have accumulated only 67.83 runs per innings, which are again the lowest among the lot. In a relatively weak bowling attack, the batters have to push extra and do the heavy lifting.

There have been a few good individual flashes of brilliance, but a collective effort is missing. The batters have lost their wickets at the wrong time, and, consequently, the opposition has managed to stroll back into the game. An ideal example of this issue is MI's game against Rajasthan Royals.

The five-time champions were 112/2 in the 12th, cruising to the 194-run target comfortably. However, they lost 4 wickets for 15 runs in just 15 balls. Two of the four dismissals were of the set batsmen - Ishan Kishan (54) and Tilak Varma (61) - and the other two of the designated finishers - Tim David and Daniel Sams.

Consequently, Kieron Pollard had plenty of work left to do alone in the death overs. Suryakumar Yadav was in a similar situation against RCB and PBKS. While he did manage to take his team out of the troubled waters against the former, his pyrotechnics couldn't save the team against the latter.

Mumbai Indians bought Ishan Kishan with a lot of expectations. However, he has failed to fit into the role according to the team's requirements. Barring the knock in the first game, his intent has been a major concern.

Even his fifty against Rajasthan Royals in the second game was too slow. In his last 23 balls, Kishan only managed to hit one boundary in this game. While his average of 38.2 is admirable, the strike rate of 117.18 is quite deplorable.

The bigger concern, though, is his method of innings construction this season so far. 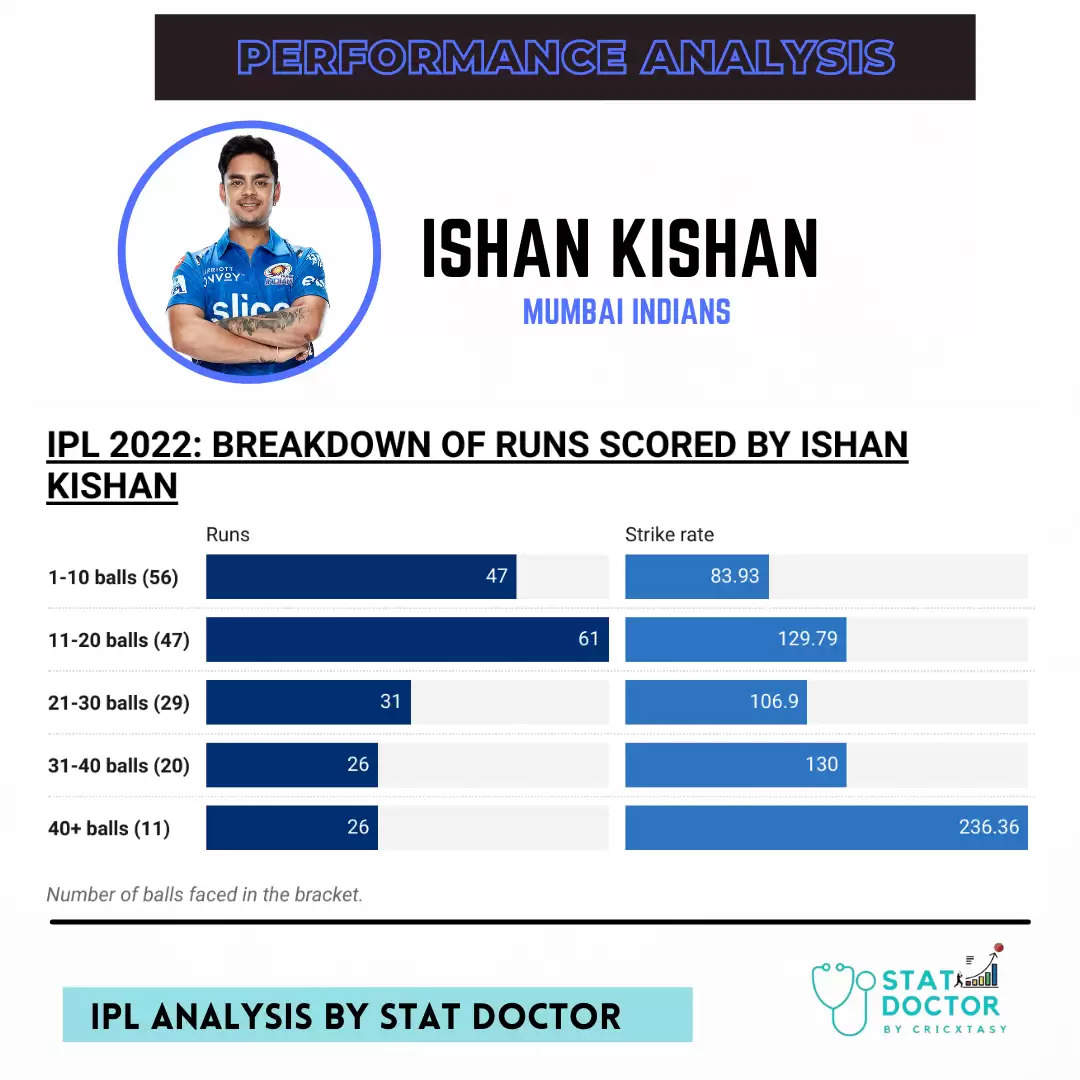 Ishan Kishan was always a slow starter in the IPL. Even in the last two seasons, he had a low strike rate of 103.79 in the first ten balls. But after playing a few balls, he used to cover up that slow start pretty easily. However, that has not been the case this time around, for now at least.

For some reason, he has never got going in any phase of his innings so far. This despite playing an ample number of balls in almost every game. His boundary hitting gears seem to have taken a major hit post powerplay particularly.

Barring the first game against Delhi Capitals, the southpaw has a strike rate of 83.8 and hit only one boundary in 37 balls. Someone who has only crawled throughout the powerplay needs to compensate for that later on. Unfortunately, Kishan has only languished further this time around.

While Rohit Sharma is yet to score big, his intent has at least been passable in the powerplay. His prodigious approach has allowed Kishan to take a few balls to settle in properly. Kishan, though, has abstained from enjoying.

This is the root cause of a ton of problems. Mumbai Indians, by far, have been the worst-performing bowling unit this season. Barring Jasprit Bumrah, every other MI bowler has been pretty inconsistent throughout. 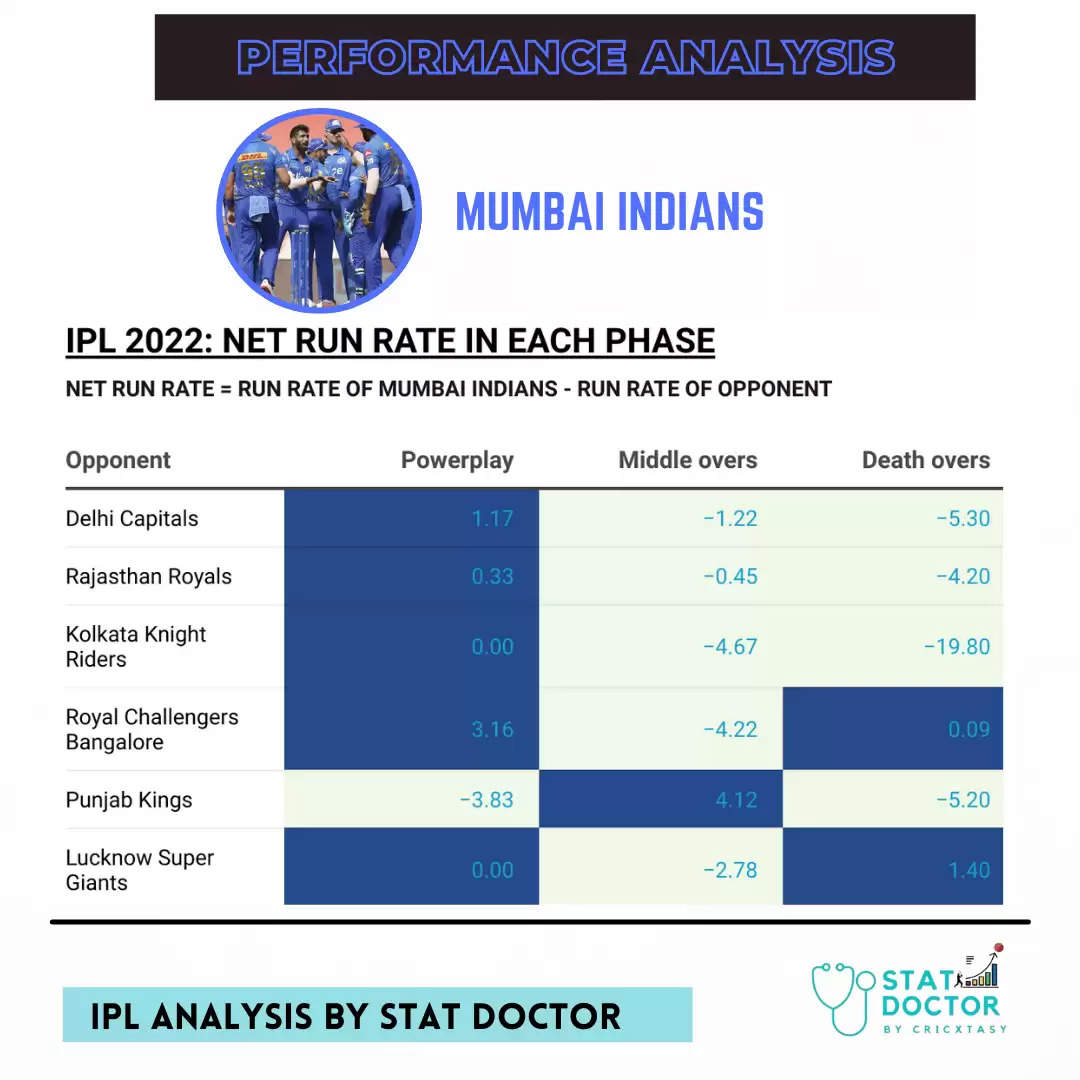 As shown above, Mumbai Indians have ceaselessly conceded more than they managed to assemble. Despite starting off well with the bat (as discussed above), they have only gone downhill post powerplay. Only thrice have they managed to fare better than the opposition in these phases.

There wasn't much expected from their bowling unit right from the start. They just needed to be on par and provide decent support to the batters. But, MI bowlers have let a balanced game slip off abruptly on several occasions.

In the opening game against Delhi Capitals, Mumbai Indians were cruising to a comfortable victory by the end of the 14th over. DC required 65 runs off the last six overs with only four wickets left. Lalit Yadav was looking scratchy and Axar Patel played only two balls.

But, both batsmen started attacking immediately and took every MI bowler apart. The duo went on to make 65 runs off just 26 balls, handing Mumbai a poignant defeat. This was only the start of a despondent performance of MI bowlers.

In their next game against Rajasthan Royals, the five-time champions conceded as many as 28 boundaries, with Jos Buttler making a scintillating century. They even went on to concede 61 runs in just 3 overs, including a 35-run over against KKR. The onslaught of Punjab Kings and Lucknow Super Giants batters in the last two games were barely a surprise. 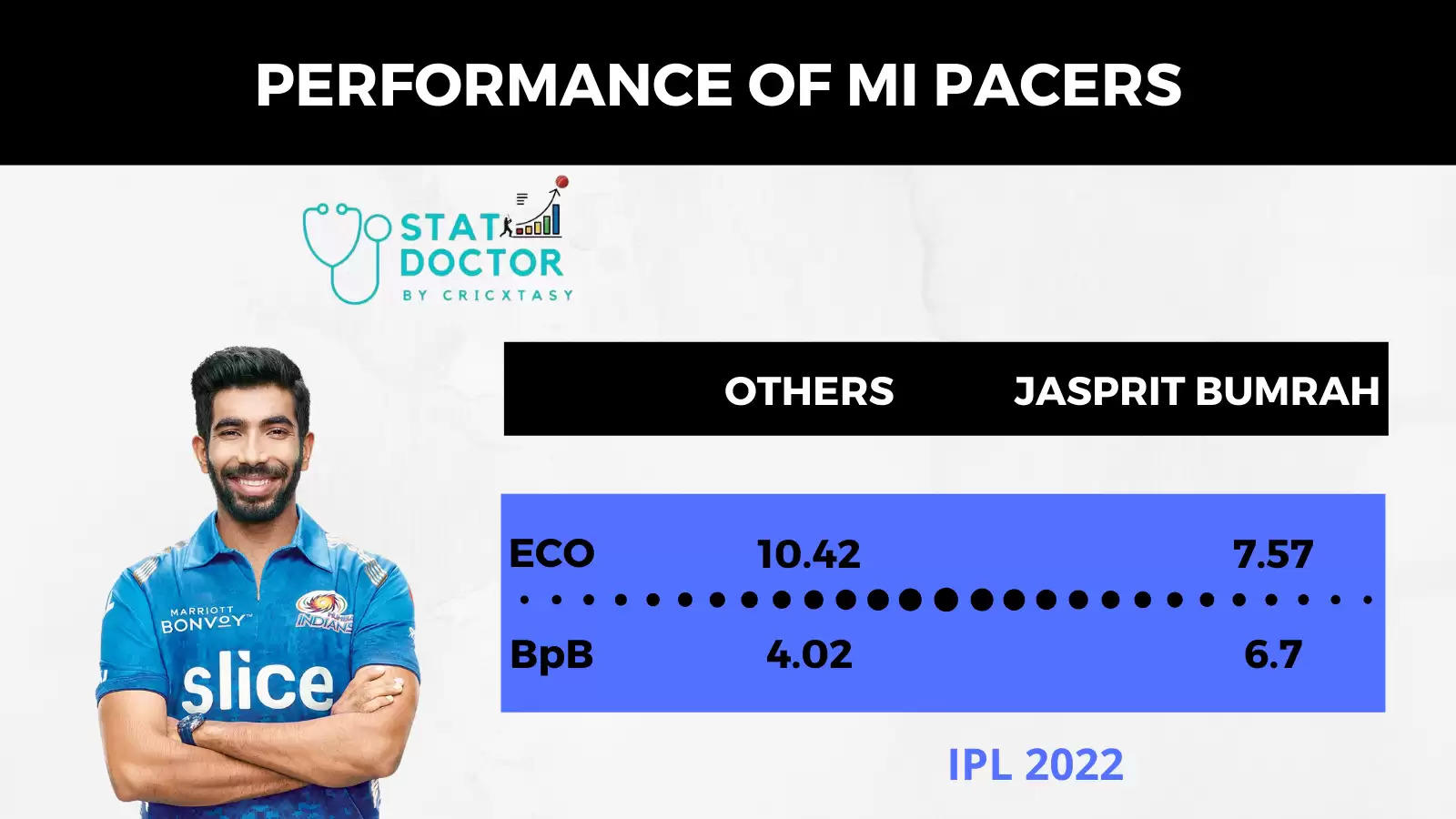 Jasprit Bumrah has, as always, been peerless with Murugan Ashwin also doing reasonably well. But, the other bowlers have been mediocre. More often than not, they have been on the expensive side.

Jasprit Bumrah has done all the arduous work, but, unfortunately, he can bowl only four overs in an innings. The other bowlers have to put out a decent performance collectively and make the job slightly easier for the batters.

The five-time champions have bounced back strongly and managed to qualify for the playoffs in the past. They might not even be thinking of playoffs qualifications at the moment. For now, MI would want to register their maiden win in the first place.