There is something sublimely beautiful in watching Keegan Petersen play

Elegant glances through point, eye-pleasing flicks through mid-wicket, fine reverse sweeps for boundaries – Keegan Petersen has all the shots in his arsenal to thrive in international cricket. And more importantly, he seems to have the hunger and determination for it as well. Coming into only his second Test series, with subpar performances in his […]
By Rohit Sundar Sun, 23 Jan 2022 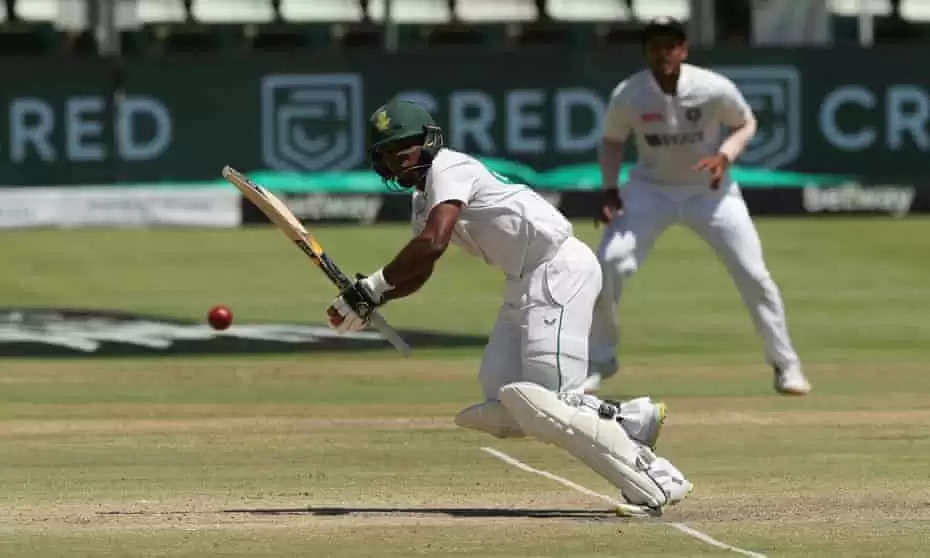 Elegant glances through point, eye-pleasing flicks through mid-wicket, fine reverse sweeps for boundaries – Keegan Petersen has all the shots in his arsenal to thrive in international cricket. And more importantly, he seems to have the hunger and determination for it as well.

Coming into only his second Test series, with subpar performances in his first, in a fresh team with new faces looking to reassert the dominance held by predecessors a decade ago, one could say there was much expected from this 28-year-old batter from Paarl.

Before his Test debut against West Indies in June 2021, Dean Elgar, the captain of the South African Test team, touted Petersen as the one to fill in the vacancy left by the recently retired Faf du Plessis. At this point, not many outside South Africa knew of Petersen, and three scores below 20 against West Indies certainly didn’t help his case. There was every chance that consistent failure against India at home could have resulted in Petersen becoming just another fleeting name in South African cricket in the search for a player with the calibre to succeed at the international level. After all, uncapped Ryan Rickleton, another talented top-order batter was waiting in the wings.

However, not only did Petersen respond in a way to please the selectors, he ended up bagging both the Player of the Match award in the third and deciding Test, and the Player of the Series award after scoring the highest runs in the series against India.

It was not as though the runs came easy – the pitches weren’t flat, by any means, and the potency of Bumrah and Shami need no introduction. That South Africa managed to win the series without scoring 300 even once in six innings reveals how their bowlers played a significant role in beating India. All this further substantiates how Petersen’s runs were priceless in a series dominated by the bowlers; no other South African scored 50+ in the decider, where Petersen scored match-winning knocks of 72 and 82 in the two innings.

A classy knock from Keegan Petersen during the #Proteas first innings

In the second innings, in particular, chasing 212 and assailed by a relentless pace battery, Petersen bulled through with a compact defensive technique, coupled with impeccable judgement when it came to leaving balls outside off. Needless to say, that’s easier said than done. One ball pitching close to full length and rearing dangerously and spitting like a cobra past his face, another angled on the stumps and darting away perilously close to kissing the outside edge, and yet another, swerving in sharply, inches from the stumps – Petersen faced it all, and Petersen survived. And in between, he fired back with quiet confidence. An exquisite cover drive off Bumrah oozing class, a perfectly timed glance through point off Thakur, and of course, an authoritative reverse sweep off Ashwin – Petersen brought out a wide array of shots against both pace and spin and executed them to perfection, perhaps a result of both inherent talent and nearly a decade of experience in first-class cricket.

Admittedly, Petersen did edge one to first slip when he was on 59, only for Pujara to shell a relatively easy take. As they say, fortune favours the brave, and if anyone deserved a bit of luck, it was this brave man who kept the prowling hunters at bay for most of the chase. Ultimately, he chopped one off Shardul Thakur onto the stumps with 57 runs needed and rightly received a standing ovation for his superlative efforts in the chase. One could tell by his disappointment that he wanted to be there till the end and score the winning runs for his country.

Clearly, Petersen is someone who relishes the fight (and enjoys every moment of it, as he revealed in the post-match presentation), a valuable quality to have in a cricketer. Another valuable quality for anyone, not just a cricketer, to possess is the willingness to learn at all times, and a proud Elgar lauded Petersen for having this very quality in his post-match interview.

A look back at Petersen’s past confirms these qualities and his desire to play for his country. Petersen played for the Knights in the CSA Domestic Franchise series in the 2018/19 season and ended up becoming the highest run-scorer of the series, at an average of 61.53. As a reward for consistent performances, he was initially drafted into the national squad in December 2019. Unfortunately, he was unable to break into the playing eleven in that series against England. Biding his time, Petersen sought to improve his game by training with Jacques Kallis, enjoying the experience, as revealed by his domestic coach, Imraan Khan. He then moved to Dolphins for the 2019/20 season and continued his run-scoring spree with a knock of 173 in his first match. This was the beginning of another fruitful year in the domestic leagues that would eventually lead him back into the national squad. However, due to Covid-19, he had to wait till June 2021 before getting a Test cap.

Petersen’s path to international cricket wasn’t easy, but what matters most was that he didn’t give up, and he is now reaping the rewards after many years of toil. Not everyone gets praised by AB de Villiers, who, during the third Test against India, tweeted his excitement at the composure, skill and technique displayed by Petersen against one of the best attacks in the world.

The long and the short is Keegan Petersen CAN play! I’m very excited with the composure, skill and technique I’ve seen against one of the best attacks in the world.

Like a soldier on a battlefield, knowing when to stay firm in defence and when to strike out in offense, Petersen has consistently made good judgements without yielding any purchase for his opponents to grab onto. A player undeterred in the face of adversity, having faith in himself and the courage to create opportunities for fighting back, he has proven that he has what it takes to belong at this level. His next goal ought to be consistency, and the upcoming away tour against New Zealand in February 2022 provides the perfect stage for it.

After the lengthy rebuilding phase for South Africa following the multiple retirements of high-profile players, the signs shown by new players like Petersen (and Marco Jansen, for another) are promising after a hard, debilitating winter filled with loss and instability. With victories in their last two series, this team is looking to dominate the world once more, teeming with fresh talent as well as having skilled veterans leading the way.

When someone talks about a cricketer from South Africa with the initials KP, Keegan Petersen may not be the first person who comes to mind. But this KP, slowly gaining worldwide recognition, is well on his way to filling Faf’s boots and making the South African No.3 spot his own.