Prashanth Satish: Commentary gems, stories and a look at the journey of the very special Harsha Bhogle

It’s not every day that you find a 19-year-old boy from an average Indian household doing stints of cricket commentary with the All India Radio and to be the first-ever Indian commentator to be invited by the Australian Broadcasting Corporation. It means you are doing things the right way or at least in a way […]
By Prashanth Satish Tue, 7 Apr 2020 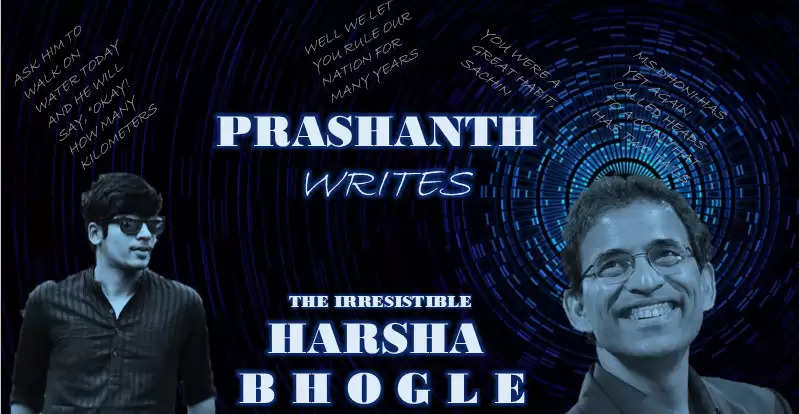 It’s not every day that you find a 19-year-old boy from an average Indian household doing stints of cricket commentary with the All India Radio and to be the first-ever Indian commentator to be invited by the Australian Broadcasting Corporation. It means you are doing things the right way or at least in a way that you are getting international recognition and attention worldwide.

The interviews, stints of commentary or giving voice to some iconic moments of Indian cricket over the years, Harsha Bhogle has never failed to inject joy to the listeners. At a time when we are all missing cricket and at home fighting a bigger cause, it might be a nice time to take a look at few Harsha Bhogle moments in the past that brought joy to our faces in the times when we took the number of cricket games around the world for granted and also at his journey as a commentator.

It was probably the last time India’s finest ever cricketer, Sachin Tendulkar walked off from Lords after he was dismissed in the second innings in the Test match between India and England in 2011. In the lunch show post that Geoffrey Boycott pointed out,

“So whose loss is it, Sachin’s or the honours boards’?”.

Cricket commentary if you look at it from a holistic point of view is dominated by the stalwarts of the game or at least by names that have some international experience next to their name and that is why the journey of Harsha Bhogle’s to the top tier of international cricket commentary deserves that bit of special attention.

Another one of such moment came during India’s game against England at London when Michael Atherton tried to make a cheeky comment regarding the massive number of Indian support that outnumbered the English crowd.

Atherton: It is England but India has more support in the stadium, and the pitch is completely assisting your spinners. Says a lot about hospitality, right?

To which Bhogle replied taking a sly dig at the time which British ruled the Indians,

Bhogle: Well, we let you rule our nation for many years. I believe that’s the least you can do for us.

Cricket is literally a religion in our country and what stands out for Bhogle is that he reached where he did with no cricketing experience at the highest level. To be fair to Bhogle, he does have a little bit of cricket next to his name as he played inter-university cricket but did not really pursue it further. A Chemical Engineering degree and a Masters at IIM but something Bhogle would have known early is that the biggest joy in his life is to voice opinions or narrate the instances of the gentleman’s game.

That takes me back on a piece of commentary during the first and the last T20I played by one of the finest gentlemen the gentleman’s game has seen, Rahul Dravid. Dravid was teeing off hitting sixes for fun when Harsha quoted on-air,

“ Ask him to walk on water today and he will say, Okay! How many kilometres? Ask him to jump from a cliff in the form he’s in and he’ll say, here’s your parachute I don’t need it”

A major aspect of being a good commentator is not only to have a good command over your language or have a strong vocabulary in your armoury but also to have a fantastic presence of mind and also a fair sense of humour which you only develop with experience and comfort of being in the commentary box on a lot of occasions.

Take these witty choice of words by Bhogle at a time when former Indian captain Mahendra Singh Dhoni was on a 7 match streak of calling it wrong at the toss. After Dhoni had lost another toss,

Harsha: “MS Dhoni has yet again called for heads to the coin which has two tails” Moments like this might not have had a lasting impact for the listeners but it definitely makes the moment special and just makes the spectacle even greater for the spectator. He has given voice to some of the iconic moments of arguably the greatest ever batsman the game has seen – Sachin Tendulkar – which leaves an impact that lasts till date. Sachin was facing a lot of criticism and probably not at his very best right after the injury lay off and Harsha Bhogle went on to voice his opinion on this,

Here is another gem from Bhogle when Tendulkar was walking into bat in a test match and the crowd were wild instead of the usual silence that follows a wicket he said,

“ You were a great habit, Sachin “

The command over his language is a standout because at the same time a person in his position puts his views forward, it is important that you don’t create an image of bias towards a single player. It takes me back to a tweet in 2019 where he tweeted about the importance of not creating the image of personal bias.

In recent times, I have been labelled pro-Dhoni and anti-Dhoni, pro-India and anti-India, pro-Kohli and anti-Kohli, pro-BCCI and anti-BCCI. I find that reassuring. It confirms there is no bias, which is the primary benchmark I set for myself. Thank you.

Harsha is into the 40th year of his commentary journey but despite the fair share of controversies he has had to face, the way he has carried himself has been very professional. People may have a wide range of opinions regarding him, some call him the voice of cricket and there is a fair share of people that think differently but one thing Harsha can be absolutely sure of is the fact that he will always remain the embodiment of inspiration for every individual that dreams of being a commentator without international cricket experience. A journey that is still not over but deserves a ‘Thank You’ already.