The Pakistan skipper was seen having an amusing conversation with one of the Netherlands players between games.
By Kashish Chadha Sun, 6 Nov 2022 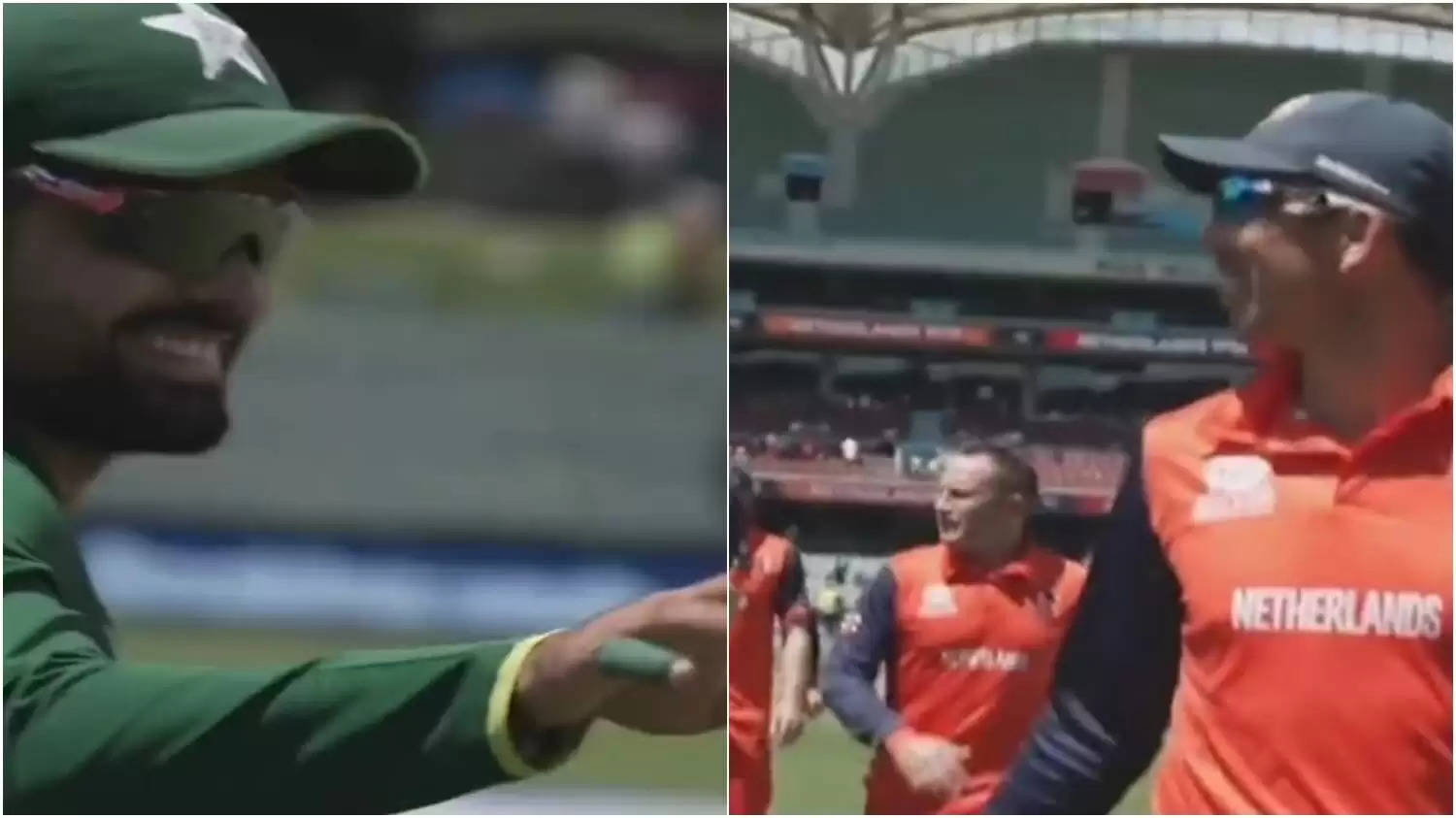 Babar Azam thanked the Dutchmen to ease Pakistan's quest to make the semis with their shock victory over South Africa.

Babar Azam was a man grateful of the spirited Netherlands side after their remarkable victory over South Africa at the Adelaide Oval on Sunday (November 6) for the T20 World Cup 2022. The Pakistan skipper said thank you to the Dutchmen for their surprise triumph over the mighty Proteas as it opened up doors for his team's entry into the semifinals stage.

At the beginning of the day, the equation was pretty straightforward: if South Africa won over Netherlands, as they were expected to, they would've made it past the Super 12s stage from Group 2. An unlikely defeat for them, however, was set to give Pakistan a backdoor entry towards the marquee end of the competition.

South Africa were placed with five points from four matches, while Pakistan had four points. Thus, a victory for the Netherlands meant that Proteas crashed out of the competition, with Pakistan later pipping them over in the points table via a triumph over Bangladesh at the same venue in what was a fixture that became a virtual quarterfinal.

This led to an interesting conversation between two games among Pakistan skipper Babar Azam and the group of jubilant Netherlands cricketers.

Babar thanks the Dutch side; Cooper responds

In a funny clip doing the rounds on Twitter, one can see when the Pakistani players crossed paths with the Netherlands side, he saidto their players, who rejoiced in the moment knowing they had helped their Pakistani counterparts by beating the South Africans.

In response, though, Netherlands middle-order batter Tom Cooper made it a point to ask Babar & company to do them a return favour by beating Bangladesh so that they can qualify for the next T20 World Cup directly. What made for an amusing moment, Cooper can be heard saying "now make sure you win, so we finish fourth" in Group 2.

"now make sure you win!"

Finishing fourth being pertinent here, Cooper was indirectly referring to the qualification criteria set for the next T20 World Cup in 2024 by the ICC. Top 4 teams within the two Super 12s stage of this event make the cut directly for the 20-team competition scheduled to be held in West Indies and USA.

Owing to their victory over South Africa, and previously Zimbabwe, Netherlands finished with four points. But they also required Pakistan to beat Bangladesh, who held similar points but lesser NRR, and for India to hammer Zimbabwe, a team with one less point than them, to end at fourth in their group standings and thus avoid the regional qualifiers for the next event. On a memorable day, the Netherlands had it all going their way.