The former India skipper broke the ice with the group of Indian journalists present in Australia for the T20 World Cup.
By Kashish Chadha Sat, 5 Nov 2022 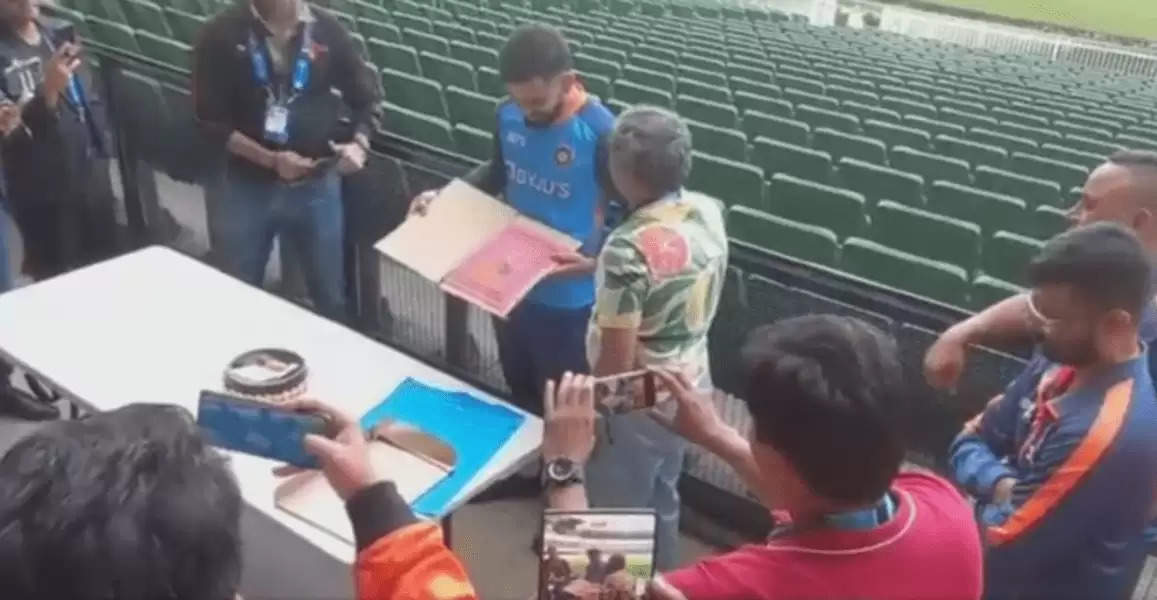 Virat Kohli appreciated a cake-cutting ceremony organised on his birthday by Indian journalists in Australia.

Virat Kohli was given a birthday surprise by Indian journalist contingent on duty in Australia for the T20 World Cup 2022. The Indian batting great had a cut-cutting ceremony arranged for him on his 34th birthday this Saturday (November 5) at the MCG.

Kohli, who is in Melbourne for India's final Super 12s encounter of the tournament versus Zimbabwe on Sunday (November 6), was left pleasantly surprised by the arrangements. For once, the group of journalists and the great cricketer broke the ice and shared a few lighter moments.

Virat Kohli gracefully accepted the journalists' request to come for the cake-cutting bit and even appreciated them for their wonderful gesture. The former India skipper ate the cake, called it tasty and joked that for once he would eat it all, leading to a burst of laughter for all involved.

He then went on to click pictures with the journalists. All of this was captured in a clip doing the rounds on Twitter, posted by various prominent journalists over their handles as Kohli's birthday celebrations only picked up afterwards.

In the clip below, Virat Kohli can be seen cutting the cake on the occasion of his 34th birthday. An extremely fit athlete with a rigorous diet regime, Kohli for once let himself indulge in the taste of the cake and even appreciated the journalists who had arranged for the whole ceremony. He amusingly joked he would eat the whole cake if he could and clicked pictures with the media personnel as well.

In another clip doing the rounds from Kohli's birthday celebrations, he can be seen cutting a cake alongside India's mental conditioning coach Paddy Upton, who happens to share the birthday with him. The BCCI posted the clip where one can see the rest of the Indian players also joining in the celebrations.

Birthday celebrations ON in Australia 🎂 🎉

In both the clips, Kohli is seen in a jovial mood, which is with good reason as the return to Australia has once again proven fruitful to him with the bat in hand.

The modern-day giant is currently India's top run-getter of the T20 World Cup with three fifties from four matches, including a match-winning knock versus Pakistan.