Deandra Dottin bats without helmet in The Hundred; Umpires fail to notice violation of ECB Regulations

West Indies all-rounder Deandra Dottin removed her helmet during the last over in yesterday’s match in The Hundred. London Spirit Women defeated Northern Superchargers Women as they chased down a substantial total of 127 runs with two balls to spare. Much of the credit needs to be given to Dottin who scored an unbeaten half […]
By Yashovardhan Amonkar Wed, 4 Aug 2021 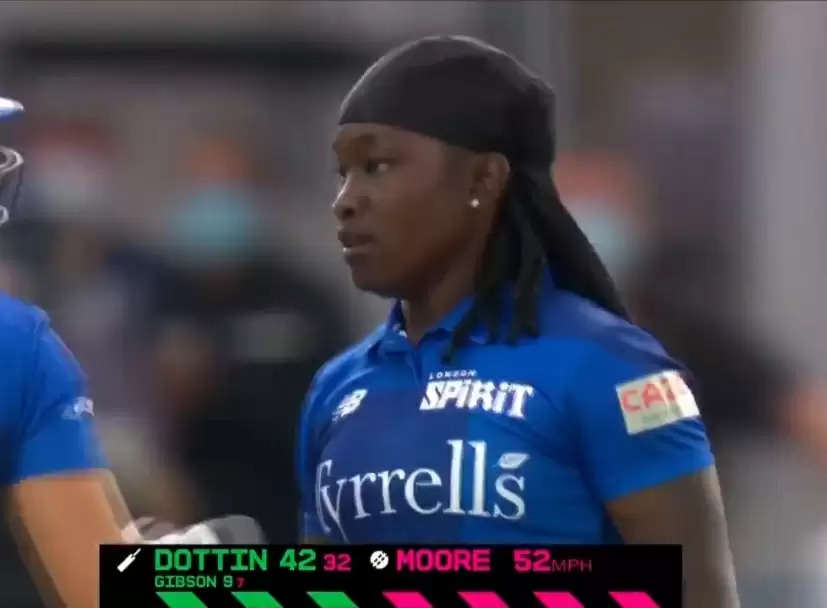 West Indies all-rounder Deandra Dottin removed her helmet during the last over in yesterday’s match in The Hundred. London Spirit Women defeated Northern Superchargers Women as they chased down a substantial total of 127 runs with two balls to spare.

Much of the credit needs to be given to Dottin who scored an unbeaten half century. She scored 50 runs off just 34 balls to take her side home. Her knock consisted of as many as eight boundaries, two of which came in the last over.

Also Read: WATCH: Third Umpire Apologises in The Hundred after forgetting to use UltraEdge for LBW decision

One surprising event which occurred during the last over of play was Dottin’s act of removing her helmet. While the bowler she was facing was an off break bowler, it is always advisable for both men and women batters to wear some sort of protective headgear.

Deandra Dottin finishes it with a flourish! #TheHundred #TheHundredOnFanCode pic.twitter.com/6NeIuIVkP2

While nothing happened to her as she hit a couple of boundaries with her helmet off, the risk should have been completely avoided instead. The guidelines stated by the ECB clearly suggest that the umpires should have stepped in and should have even paused the match until Dottin wore the helmet.

4.1 the Match umpires shall be responsible for ensuring that a head protector or (for wicketkeepers only) a face mask is worn by every Relevant Participating Cricketer when he/she is undertaking any of the Regulated Activities (but shall not be responsible for ensuring that the headgear being worn by the Relevant Participating Cricketer is Compliant Headgear); and

4.2 in the event that a Relevant Participating Cricketer fails to wear a head protector or (for wicket-keepers only) a face mask when seeking to undertake a Regulated Activity, the Match umpires shall not allow the Match to continue.

The umpires didn’t stop the match and it went on until Dottin finished the chase with back to back boundaries. While removing the helmet was a risky approach taken by Dottin indeed, it was the responsibility of the umpires to be aware of the guidelines stated by the ECB.

See head protector regs. Dottin shouldn’t have taken helmet off, but umps are the ones deemed responsible for ensuring helmets are worn, and should’ve paused the match according to this. Can’t see any reason for consequences for Spirit if umps didn’t react https://t.co/t8O4fWhfuM

“It’s good to get it home for the team, been a bit of a struggle but I had to dig in and find a way. We play with a never-say-die determination, so I didn’t think there was much pressure. Just stick to the basics. [Target?] We pulled it back a bit, they were a couple of runs short. [Feeling pressure?] I was a bit nervous, had to find a way to adapt, I’m in the groove now so you’ll see a lot more.”, Dottin said after being adjudged the Star of the Match award.