Are Australia scared of Virat Kohli? 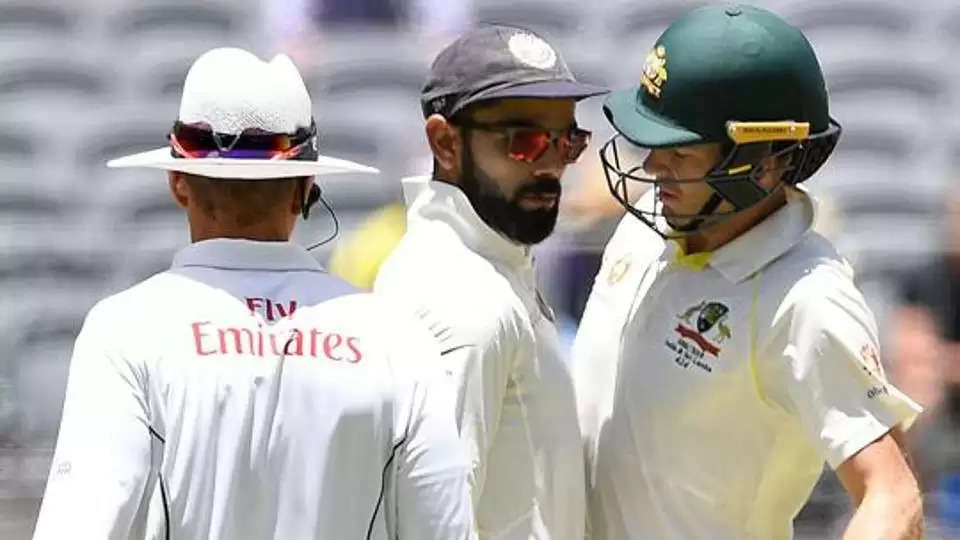 There’s always been something about Australia and Virat Kohli. You look at Kohli and the history he’s had with Australia. The Australian players, the support staff and even the media are constantly talking about one man, and that is Virat Kohli.

You look at Australia’s latest cricket documentary ‘The Test’, everybody is talking about Kohli. Be it his batting, his temperament, his sledging, he was the centre of attraction and all the spotlight was on him. In fact, Australian Test captain, Tim Paine even went on to narrate a funny incident. He admitted that he had no clue how to get Kohli out especially after watching him bat in the pre-series net session.

“And I was sort of thinking that, ‘how are we going to get this bloke out.’ And mum being mum just said, oh, he’s only another person. I said, Oh, OK, Mum, thanks, that’s good advice. That’s gonna help us get him out. Isn’t it?” Paine revealed in the third episode of ‘The Test’. Even head coach Justin Langer kept talking big things about Kohli and how he’s the best player that he’s ever seen in his life. Moreover, Australia brings the best out of him. 4098 runs, 15 hundreds, 18 half-centuries, an average of 53.22. These are Kohli’s stats against Australia in international cricket.

There were a lot of discussions in the Australian dressing room ahead of the 2018-19 Test series. One of the big things was to not to talk to him especially when he’s batting as it fires him up. You look at the history, every time Kohli is under the pump and is in a fight or banter with the opposition, it just brings the best out of him. He wears his heart on his sleeve and loves giving it back with both with the bat, his deadly eyes and never minces his words. And Australia have first-hand experience of that.

Hence, it wasn’t a surprise to see Paine and Langer jot out a plan to not talk to him as he’s always looking for a fight. However, Paine revealed in ‘The Test’ that he broke his own code on not engaging with Kohli during the second Test in Perth. He told that the Indian captain just yips ever so quietly when he passes by and that’s how Kohli gets under the skin. That’s when Kohli scored a magnificent ton.

But Paine stood up and was up for a fight in the second innings. Kohli was celebrating every wicket, trying to give it back to the Aussies the way they used to in the past and kept sledging almost every batsman. When Paine was batting, the Aussie skipper stood up and countered that beautifully. There was a lot of fun banter going around as Paine revealed, he was trying to poke Kohli so that he can implode.

That was the last instance of the Aussies getting engaged with Kohli in that series. However, almost 15 months later, there’s a new twist in the story. Former Australian captain, Michael Clarke, spilt out a new theory that the Australians are too scared to sledge Kohli and co mainly due to the IPL contracts. He feels they went against their natural game and instincts in the last 2018-19 series against the Kohli-led Indian side and were a bit ‘soft’ on them.

“I feel that Australian cricket, and probably every other team over a little period, went the opposite and actually sucked up to India. They were too scared to sledge Kohli or the other Indian players because they had to play with them in April,” the former Australian captain revealed while talking on Big Sports Breakfast.

It’s surprising that it comes from Clarke, especially after the 2011-12 and 2014-15 series where he was the captain (only in the first Test of the 2014-15 series). Ever since Kohli started touring Australia, he’s always up for a fight. Remember that middle finger incident with the crowd? Or his maiden Test ton at the Adelaide Oval in 2012 when the Aussies put him under the pump? That was the real beginning. Since, then every time he’s travelled to Australia or when Australia have turned up in India, he’s the talk of the town. And it somehow just pumps him up. It just brings the best out of him.

It’s been almost a decade since Kohli’s been facing Australia and is standing up against them, ready for a fight and the way Australians have treated him and stacked up against him has changed drastically. From going after him in the first couple of series to trying to not talk to him while he’s batting and not pay attention to him to the Paine-Kohli banter, it’s been a bumpy ride.

You look at the 2014 Test series in Australia. He landed there as India’s stand-in captain for the first Test and was up for a fight. He was hit on the head on the very first ball of the series but that barely had any impact, he was barely shaken up. It was just one season ago that Mitchell Johnson ran riot against England in the Ashes at home in 2013-14 and again in South Africa in 2014. But it hardly mattered to Kohli.

Johnson and the other Aussie players tried sledging Kohli and they got smashed in that series. It seemed like Kohli was fighting it out with the Aussies all series and he scored four hundreds. In fact, Johnson was always in Kohli’s face but the Indian star just kept giving it back. Faulkner tried to do the same in 2016 and Kohli had a phenomenal run, be it the ODI and T20I series or the World T20 game in Mohali.

So, are Australia really scared to sledge Kohli? Is it because of the IPL contracts?

There’s absolutely no doubt that the IPL is a big part of almost every top cricketer in world cricket. You look at the IPL auctions and the Australians eked out some of the biggest paycheques. Yes, it is a big part of their financial gains and it goes a long way in helping them improve as cricketers as well (as admitted by a few overseas players themselves). But was it really the reason why Australia don’t want to sledge Kohli?

Or is just the new Australia who wanted to respect Kohli and the player he is and be nice to him? Or was it just a tactic as Kohli has a history with Australia and they’ve faced the brunt of the Indian superstar getting charged (fired) up and smashing them?

It could well be. Not only because Langer and Paine said it in the documentary, ‘The Test’, but also you take press conferences of the last couple of years and you’ll find most Australian cricketers (during an India) state they don’t want to sledge or rile Kohli up.

Irrespective of that, even when cricket is not on, Kohli vs Australia continues to hog the limelight as Clarke’s comments might go around like wild fire or hell, like the way COVID-19 is spreading. But one question remains, ‘Are Australia really scared of Virat Kohli or scared to sledge Virat Kohli?’