ICC’s Back to Cricket Guidelines: What are they?

Life has not been normal over the last couple of months or so. The COVID-19 pandemic has forced the entire world to come to a standstill. Day to day life, including all sporting activities has been adversely affected. To make matters worse, things look pretty bleak for the near future as well and this virus […]
By CricXtasy Staff Fri, 22 May 2020 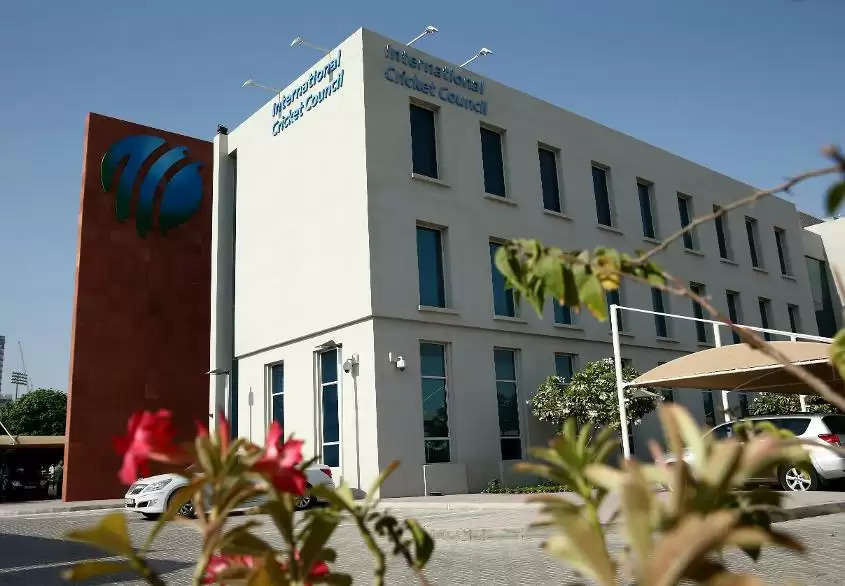 Life has not been normal over the last couple of months or so. The COVID-19 pandemic has forced the entire world to come to a standstill. Day to day life, including all sporting activities has been adversely affected. To make matters worse, things look pretty bleak for the near future as well and this virus doesn’t seem to cease.

Cricket has been hit massively as well. Be it the schedules or even the players preparation and training, everything has been hit by this pandemic. Countries as a whole have gone into lockdown with very little outdoor (essential) services running. This means that stadium facilities, training centres, gyms and every other place has been shut. As a result, players have largely remained confined to their respective homes.

The future is uncertain. There is a lot of talk around how cricket should resume and get back on its feet. Multiple series and tournaments have been postponed or cancelled. There’s talk between the boards when and how can they respect the MoUs and the FTPs and when cricket can start again in their respective countries.

With the lockdowns easing in some countries and showing signs of maybe returning back to normalcy, the ICC has jotted down a set of guidelines for the cricket boards, players, umpires, staff and the others to follow. Mind you, this is not one where the ICC decides or suggest the return of cricket in any form. It is just a set of observations, recommendations and steps on how cricket can return back on the field.

A detailed document was prepared by the ICC’s Medical Advisory Committee and they also had Member Medical Representatives in consultation, aiding them through this. Be it training, matches on the field, travelling any other activity related to this sport, the ICC has a list of guidelines and recommendations in a document which they released on the 20th of May.

The first and most important point that was made was the players safety and their well-being is paramount. Not only the players but the entire cricketing community that participates to make a game or a training session happen. The thought of resuming cricketing activities should only be considered when there is no risk or threat of COVID-19 disease-transmitting in that particular location. Moreover, the decision of the respective government needs to be prioritized. Only if the necessary permissions are obtained can cricket and its corresponding activities resume. The same applies for travel for sport as well.

Cricket may be a non-contact sport but there are a lot of things that the players share both on and off the field. Not only players but the match officials are involved as well. On-field celebrations or contacts, shared water bottles, towels, caps/helmets at times, showers in the dressing rooms and other equipment are some of the things that are commonly shared between cricketers. That needs to be avoided. Equipment like towels, jumpers, caps, sunglasses, etc are handed over to the umpires but he/she players should take responsibility for their own pieces of equipment and items they use on the field.

Another big question would be on the spectators. Each country might have its stand on playing behind closed doors and the condition prevailing at that particular time might be a deciding factor. However, if the crowd is allowed to enter the stadiums, it must be ensured that social distancing norms are followed. A public health advisor needs to be present at the stadium as well. Entry needs to be restricted for people showing any kind of symptoms. Also, selling of food and beverages needs to be avoided so that the spectators don’t come in close proximity of developing a contact.

These were just a few basic guidelines but the ICC went in-depth on the how resumption of cricket could take place. Community cricket, domestic professional cricket, and international cricket were divided into three stages each – back to Training, back to play and back to travel.

All three of them had quite a few common points. Health and temperature checks need to become the norm and all players need to be monitored at the training centres and grounds. The ICC has proposed a stage-wise return to training – first individual before a small group and eventually, squad training. However, social distancing norms and safety measures need to be taken care of. All personal gears need to be sanitized before and after their use. Also, equipment sharing needs to be avoided. The same goes for the use of communal facilities. Thus, players arriving ready to general would be preferred.

During play, teams need to continue to mind the social distancing norms. Regular hand-sanitizing will be encouraged once the players come in contact with the ball. Moreover, the players are told not to use saliva. The important bit is that the umpires who are in constant touch with the ball are expected to wear gloves. And they will also not be responsible for the players’ items. Also, players will be encouraged to travel alone and advised against travelling in ‘peak’ public transports. 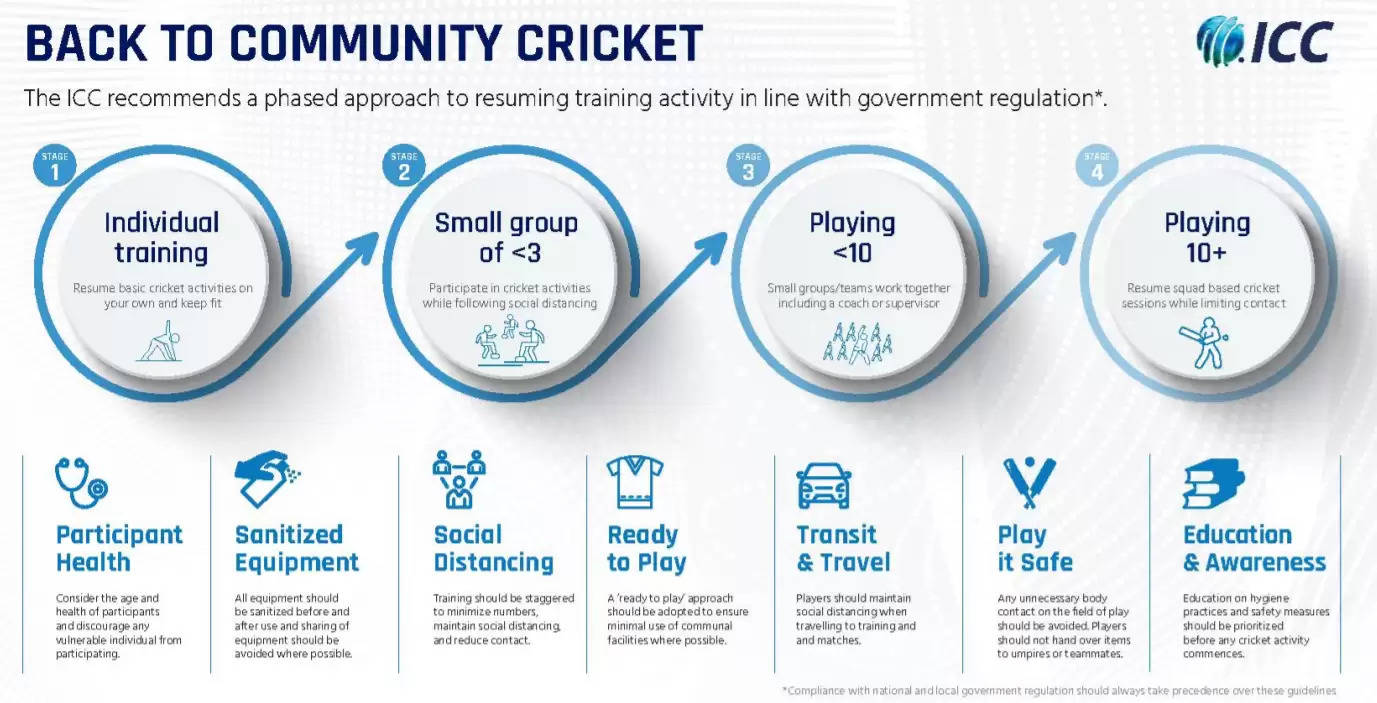 While these were some of the common recommendations and guidelines, which largely covered community cricket, there were a few that stood out for domestic professional cricket and international cricket. As far as domestic cricket in nations is concerned, the training centres and facilities need to have sanitizers at prominent places around. Moreover, training will be stage-based and progression to the next training level should not get underway unless deemed completely safe and there is no evidence of COVID-19 transmitting.

The domestic playing conditions may be amended to reduce the risk to the bare minimum. Players are advised against sharing showers or even changing in the dressing rooms. Quite a few important measures need to be put in place for travel and accommodation like no sharing of rooms, social distancing during travel and encourage travelling solo to grounds. Moreover, above all, the word of the government needs to be respected. The restrictions and regulations they mention needs to be honoured and domestic cricket needs to resume only if necessary permissions are obtained. 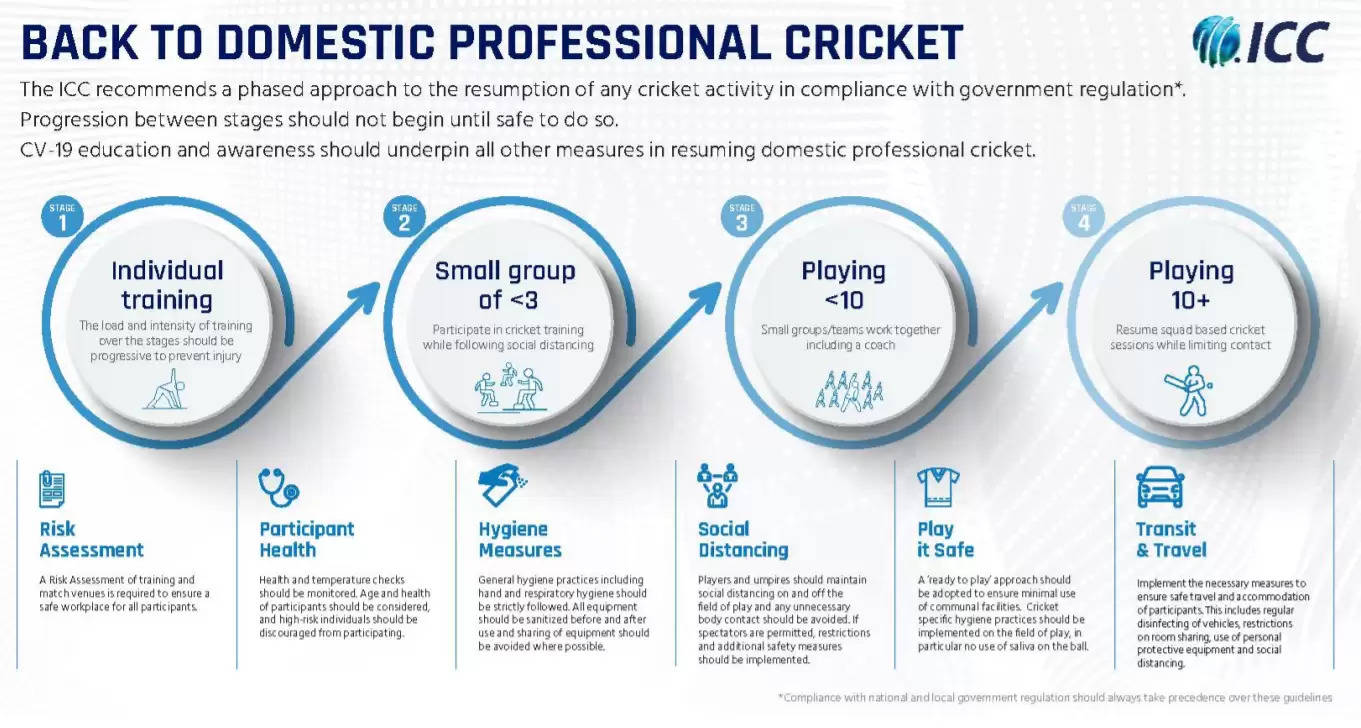 There are stricter guidelines in place for international cricket to resume. First and foremost, there are two governments who will be involved and both their opinions need to be respected. International cricket shouldn’t get underway until the nod is given from both sides. Additional biosafety measures need to be put in place which may be above the local and national governments.

Teams need to seriously consider appointing Chief Medical Officer and/or Biosafety Official who can implement the bio-secure environments and ensure biosafety standards to resume training and competition. A pre-isolation camp may also be considered with regular temperature and health checks. This needs to be done at least 14 days prior to the travel to ensure safety of the team and rule out any COVID-19 cases. A testing plan (frequency and timing) along with medical support might be crucial. A process also needs to be developed where the players report COVID-19 symptoms for the doctors to monitor. The linen sheets used in the dressing rooms, especially on treatment tables needs to be scrapped. Moreover, adequate times needs to be given to the players to return back to full fitness and to train at the required intensity.

One of the big points mentioned was to consider a strategy to deal with mental illness as well which has become an integral part of the game in this day and age. The players’ travel needs to be bio-secure or a bio-safety bubble. Also, the use of Personal Protective Equipment (PPE) will be necessary. Travel and accommodation might be a factor as well. Government restrictions need to be followed and the potential need for quarantine or self-isolation for the a group of individuals or the entire team travelling or even returning to their own country. Charted flights will be encouraged while hotel accommodation needs to be with all rooms for the team on a single floor with quality food and hygiene. 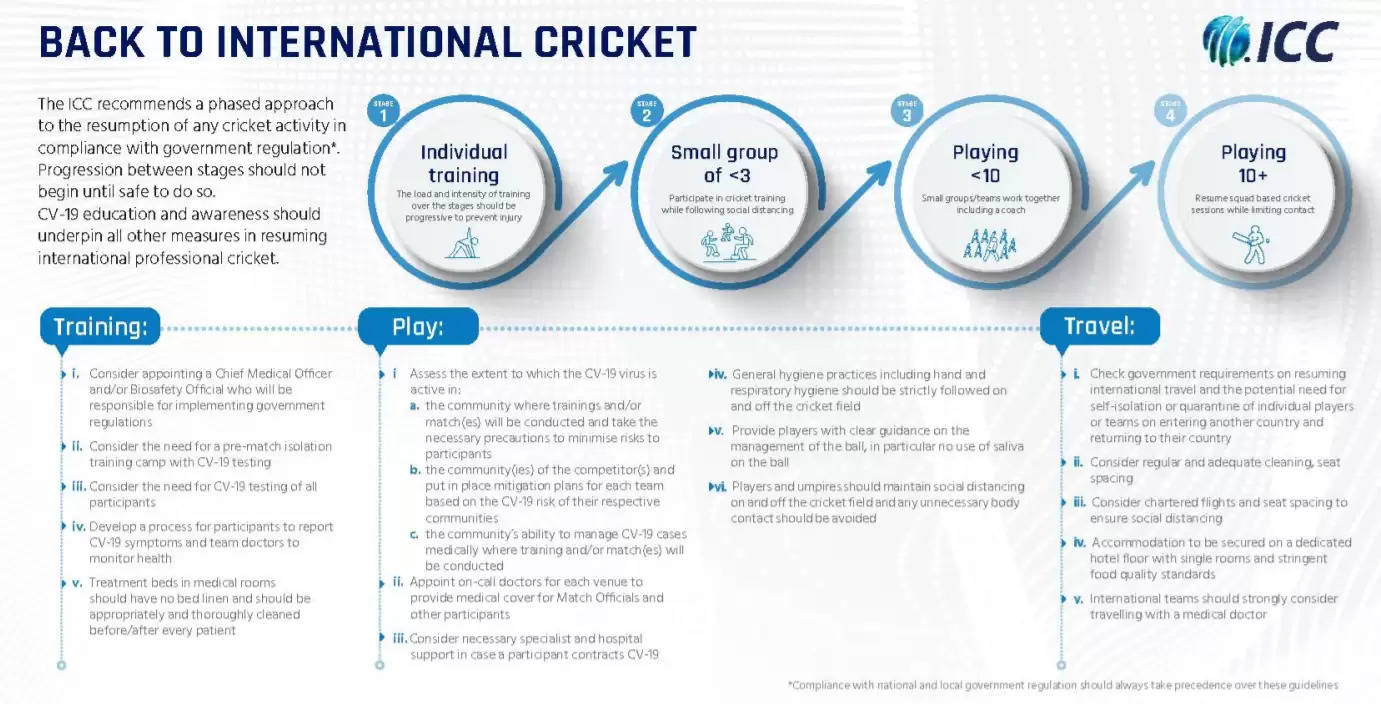 The ICC has put down a four-phased back to training activity where the progression goes from individual activity – it can be indoors or outdoors, based on the government restrictions. The next stage would be training in groups of at the maximum two or three. The third phase involves training with a group of fewer than 10 people before the squad activity or the group training involving more than 10 people. Also, the load and intensity of the players need to be managed and monitored closely. 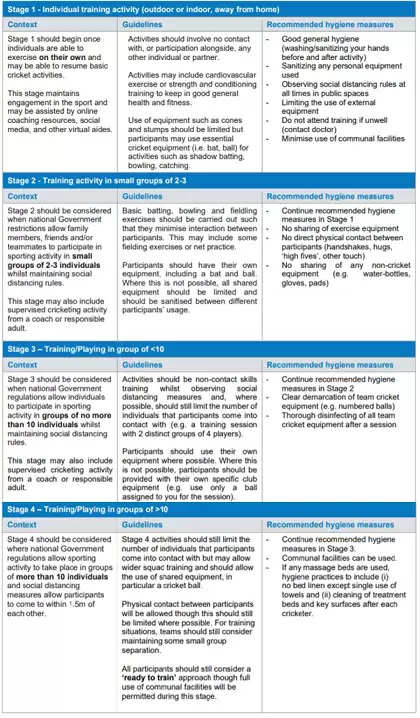 There are some special set of guidelines for the bowlers as well. Bowlers are ones that are prone to injuries the most and might be at risk if they are rushed back on the park without enough preparation. Hence, for each format, the ICC has put down a requirement or rather a suggestive training routine for the bowlers for each format.

In the end, the ICC has also prepared a ‘back to cricket’ checklist which involves government regulations, medical reports, player preparation along with safety, on and off-field protocols, local and air travel and other related aspects. 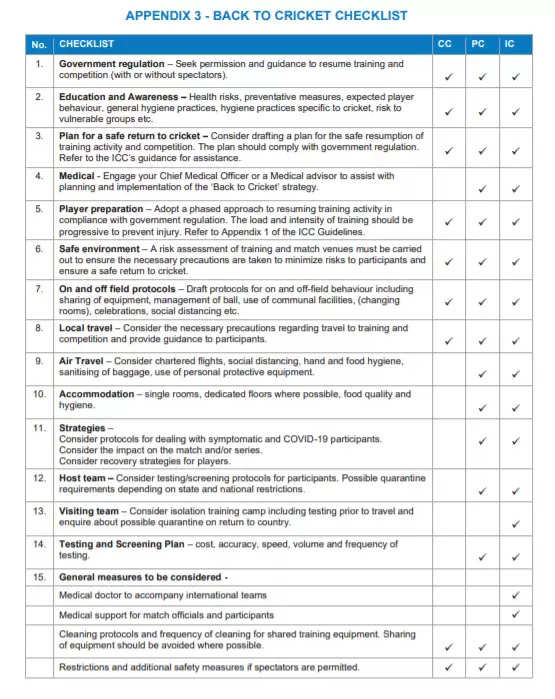