NZ vs IND Tests: Kohli’s poor form, Taylor’s landmark Test and other key numbers from the series between New Zealand and India

After the horrible 0-5 whitewash in the T20I series, New Zealand bounced back in the best way possible. They handed over India’s first ever 0-3 whitewash in an ODI series, and India’s first series loss in the World Test Championship. As a result, they gained vital 120 points and jumped to No.2 in ICC’s Test […]
By Kausthub Gudipati Mon, 2 Mar 2020 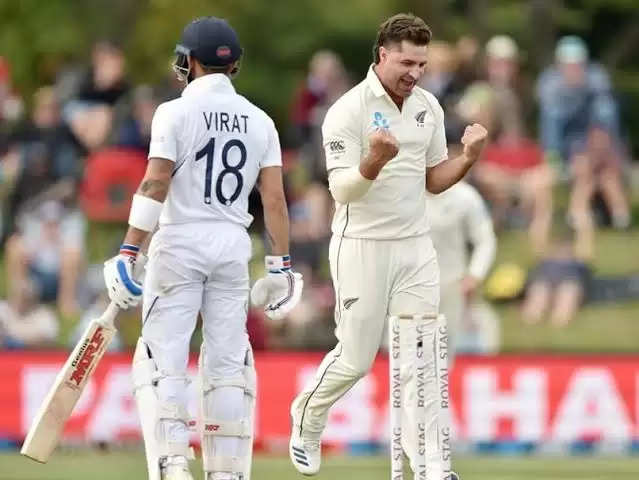 After the horrible 0-5 whitewash in the T20I series, New Zealand bounced back in the best way possible. They handed over India’s first ever 0-3 whitewash in an ODI series, and India’s first series loss in the World Test Championship. As a result, they gained vital 120 points and jumped to No.2 in ICC’s Test rankings. This is the first Test series loss for India since the 2018 series in England.

The last time India lost all the matches of a Test series was back in 2011-12, which was a 0-4 defeat against Australia. Virat Kohli’s unusual overseas toss record continued, as he lost both the tosses of this series while New Zealand’s Kane Williamson won 10 out of 10 matches after winning the toss at home. Due to the abundance of grass, it is always safe to choose fielding after winning the toss in New Zealand. 20-year-old Prithvi Shaw was to face the first ball after being put to bat in both the Tests. He showed some promise but couldn’t convert it into a big score.

Virat Kohli had such a horrible series that memories of the 2014 England tour came back to haunt once again. Rishabh Pant called into the Indian team after a really long time, failed to deliver captain’s hopes. Once again the main issue with the Indian bowling was their inability to wrap up the tail. Trent Boult and Tim Southee were brilliant, which is usual at home. Kyle Jamieson also made his international debut and came up with a superb all-round performance in both the ODI and the Test series.

Here is a list of the important numbers from the recently concluded series.

1 – During the first Test of this series, Ross Taylor played in his 100th test, becoming the first player to feature in 100 matches each in Tests, ODIs and in T20Is. During the T20I series earlier, he became the first New Zealander to play 100 T20Is, while his 100th ODI was against Kenya in the 2011 World Cup.

3 – This is Virat Kohli’s third test series defeat as an Indian captain. Others were the series against South Africa and against England in 2018. However India showed good competition, had close results and won at least one match in the other two series. Hence this is the first whitewash for Kohli as a captain, and unfortunately this time it would account for loss of 120 Test championship points. Though India lost against South Africa and England in 2018, Virat Kohli was the overall top-scorer in both the series, while Kohli had a terrible tour with the bat this time.

6 – This was New Zealand’s sixth home Test series win in a row. And in each of these series, they didn’t lose a single match. This is the joint record of remaining undefeated in most consecutive home series, along with India from 2013-17 (finally broken by Australia). Twice a team didn’t lose any match in five consecutive home Test series – West Indies from 1981-86 and Australia from 2012-15.

10 – Total number of times Tim Southee dismissed Virat Kohli in international cricket; becoming the first bowler to get rid of Kohli ten times. In the current tour, he dismissed Kohli thrice, and one time in each format.

38 – Total runs scored by Virat Kohli in this series, his lowest of any multi-Test series. He, in fact, performed poorer than the 2014 tour of England – as he averaged just 9.5 now, than compared to 13.4 then. This average of 9.5 is Kohli’s second lowest in any series, with the lowest being 9.2 in the home series against Australia in 2017.

89 – The highest score in this Test series, which makes it only the third series involving India with neither of the sides scoring hundreds. Coincidentally the 2002-03 series between the same team also has highest score of 89, by Mark Richardson. The other series was during India’s tour of Zimbabwe in 2001 (Highest score – Grant Flower 86). The top-score by an Indian batsman in this series is just 57, their lowest in any multi-Test series.

101 – Total Test matches won by New Zealand so far. During the first match at Wellington, they achieved their 100th win, becoming the seventh team to do so. Only Sri Lanka and newer Test teams are yet to reach the 100 match-mark. New Zealand needed 441 Tests to register 100 wins, the slowest among all teams.

300 – During the first Test, Tim Southee overtakes Daniel Vettori’s tally of 299, to become the first player to take 300 international wickets in New Zealand. 54.4% of the wickets taken by Southee are in home conditions.