Watch: Ben Stokes on FIRE!! Slams 8 sixes in 10 balls including five in an over

Ben Stokes reached his hundred for Durham in just 64 balls after hitting Worcestershire spinner Josh Baker for a 34-run over.
By Kashish Chadha Fri, 6 May 2022 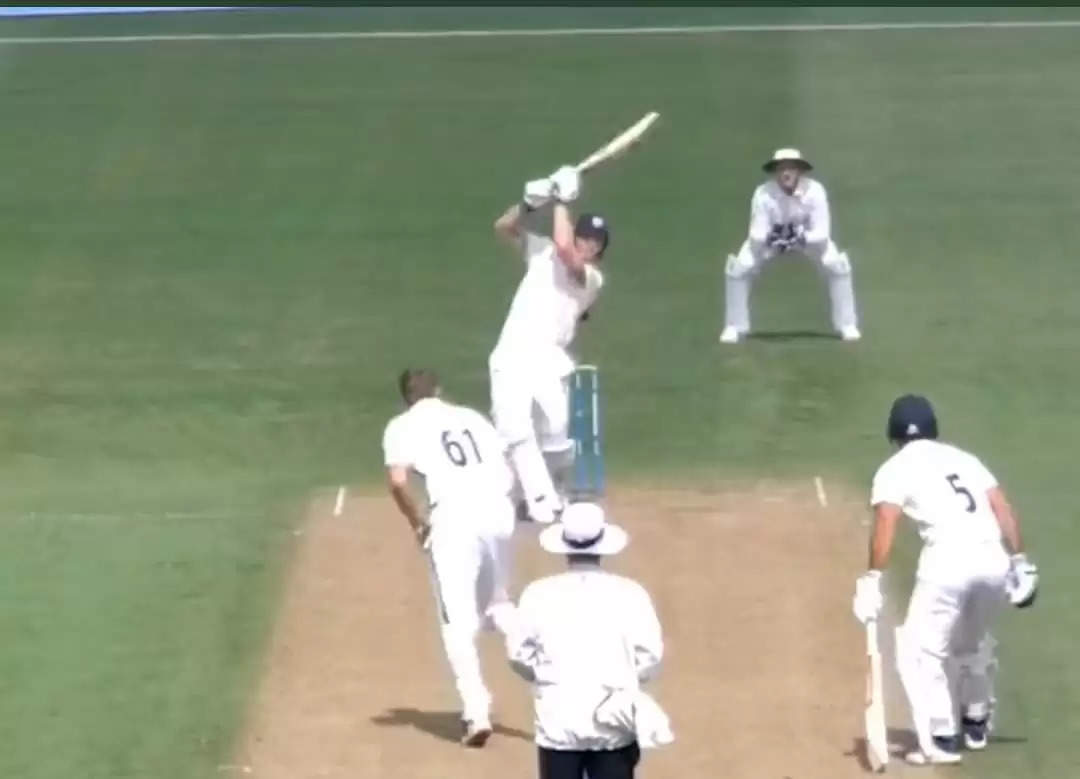 Ben Stokes smashed eight sixes in a space of ten balls on his way to a stellar century for Durham.

Making his return to County Championship for Durham, newly-appointed England Test captain Ben Stokes went on a rampage. The premier allrounder blasted 34 runs off an over in a Division 2 game against Worcestershire on his way to a tremendous 64-ball century.

Stokes smashed opposition left-arm spinner Josh Baker for a whopping five sixes and a four inside one over, unleashing some of the most brutal stroke-making at the New Road ground in Worcester.

The 30-year-old took Baker to the cleaners in a phase where he ended up hitting eight sixes inside just ten balls, going hell for leather as part of his preparations for the home international summer.

Already batting on 70 not out off just 59 balls at the start of Baker's over, Ben Stokes finished an unbeaten 104 by the end of it. Poor Baker had no safe response to some outstanding power-hitting on the part of Stokes, who kept hitting down the ground with his beautiful downswing.

Ben Stokes smashes 34 runs off an over in County Championship

The Ben Stokes onslaught was seen in full glory on Day 2 of the Division 2 game between Durham and Worcestershire. Finding it near his arc from Baker, the explosive left-hander smashed a series of sixes abrupted by one four in an over that went for an eye-catching 34 runs.

It was a phase of the innings where Stokes batted like a man possessed and ended up slogging eight maximums in a space of just ten deliveries, overhauling the 100-run mark to help Durham inch ahead in their quest to take the game away from Worcestershire.

34 from six balls for @benstokes38 as he reaches a 64 ball century 👏#LVCountyChamp pic.twitter.com/yqPod8Pchm

34 from six balls for @benstokes38 as he reaches a 64 ball century 👏#LVCountyChamp pic.twitter.com/yqPod8Pchm

On the fifth ball of Baker's over, Ben Stokes hit the left-arm spinner's another full-pitched ball to the deep mid-wicket region to bring up a stellar hundred for the Durham and England allrounder.

Stokes, who had opted out of the IPL 2022 to prioritise his Test career, made a fantastic return to first-class cricket for his county club and sent a strong warning for the oppositions due to travel to the UK in the coming summer.

Stokes will take over as England Test skipper with a three-match series against New Zealand, starting June 2. The three lions will also host India in a one-off fixture of last year's unfinished series and take on South Africa in three more games of the new World Test Championship (WTC) cycle.