Watch: 'Some things you do only after game' - Krunal Pandya kisses Kieron Pollard after dismissing him

Krunal Pandya was elated after dismissing his frend and former teammate in the final over of the innings.
By CX Writer Mon, 25 Apr 2022 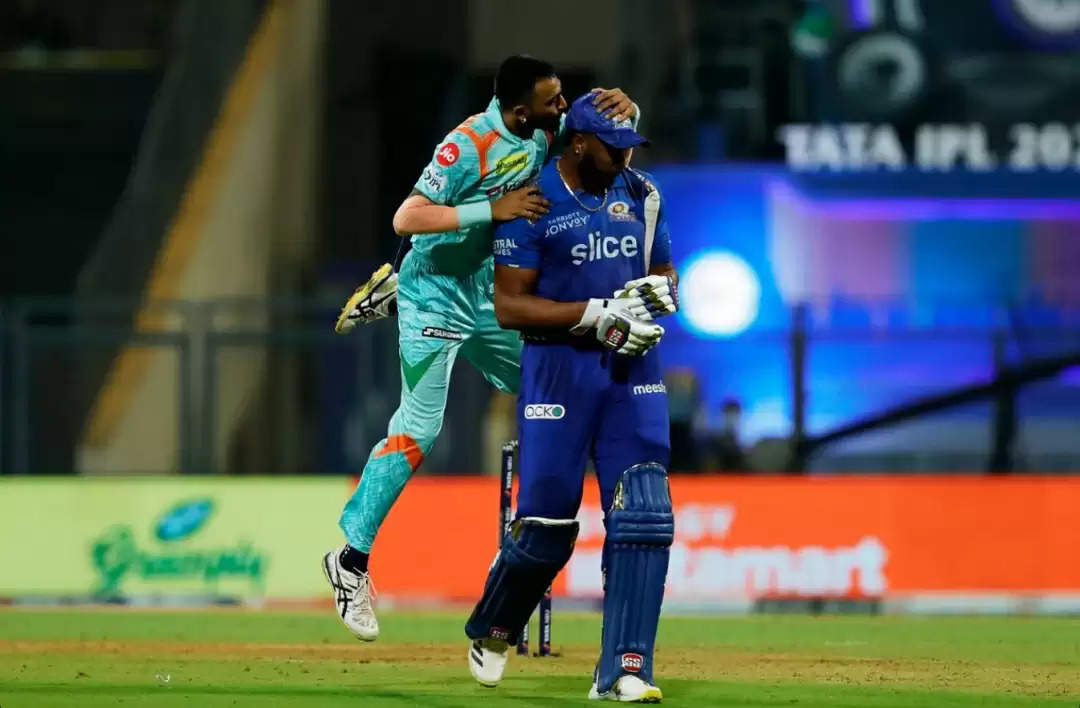 Krunal Pandya returned with the brilliant figures of 3/19 in the game.

Lucknow Super Giants returned to winning ways on Sunday (April 24) beating Mumbai Indians (MI) in the 37th match of the Indian Premier League (IPL). While KL Rahul was their star with the bat, Krunal Pandya shined with the ball against his former team returning with the figures of 3/19 in his four overs.

Interestingly, he dismissed dangerous batters like Rohit Sharma and Kieron Pollard during his spell. His camaraderie with the latter is well known to everyone as the duo spent a lot of time together when Krunal played for MI. The left-arm spinner, however, was delighted after he dismissed his friend in the final over of the innings and ended up kissing him on the head.

It happened off the first ball of the last over when MI needed 39 runs. Krunal Pandya delivered a loopy delivery which Pollard tried to hit with one hand only to find Deepak Hooda in the deep. After picking up a wicket, Krunal was extremely elated and ended up jumping on Pollard from behind and hilariously kissed his head.

Pollard was already disappointed with his performance and didn’t react even a bit to the elder Pandya’s antics. He duly walked back to the dugout after getting out. Former India cricketer Sunil Gavaskar was in the commentary box at that time and even he felt Krunal Pandya’s actions were uncalled for.

As for the match, KL Rahul smashed a brilliant century, his second of the season against MI, to propel his side to 168 runs in their 20 overs. In response, the five-time champions kept losing wickets at regular intervals and eventually fell well short of the target by 36 runs to lose their eighth consecutive game of the season.

The only positive for MI was Rohit Sharma getting a few runs as he scored 39 off 31 deliveries. But his opening partner Ishan Kishan continued to struggle as he mustered only 8 runs off 20 balls.