IPL 2022: What has worked for Kuldeep Yadav this season? 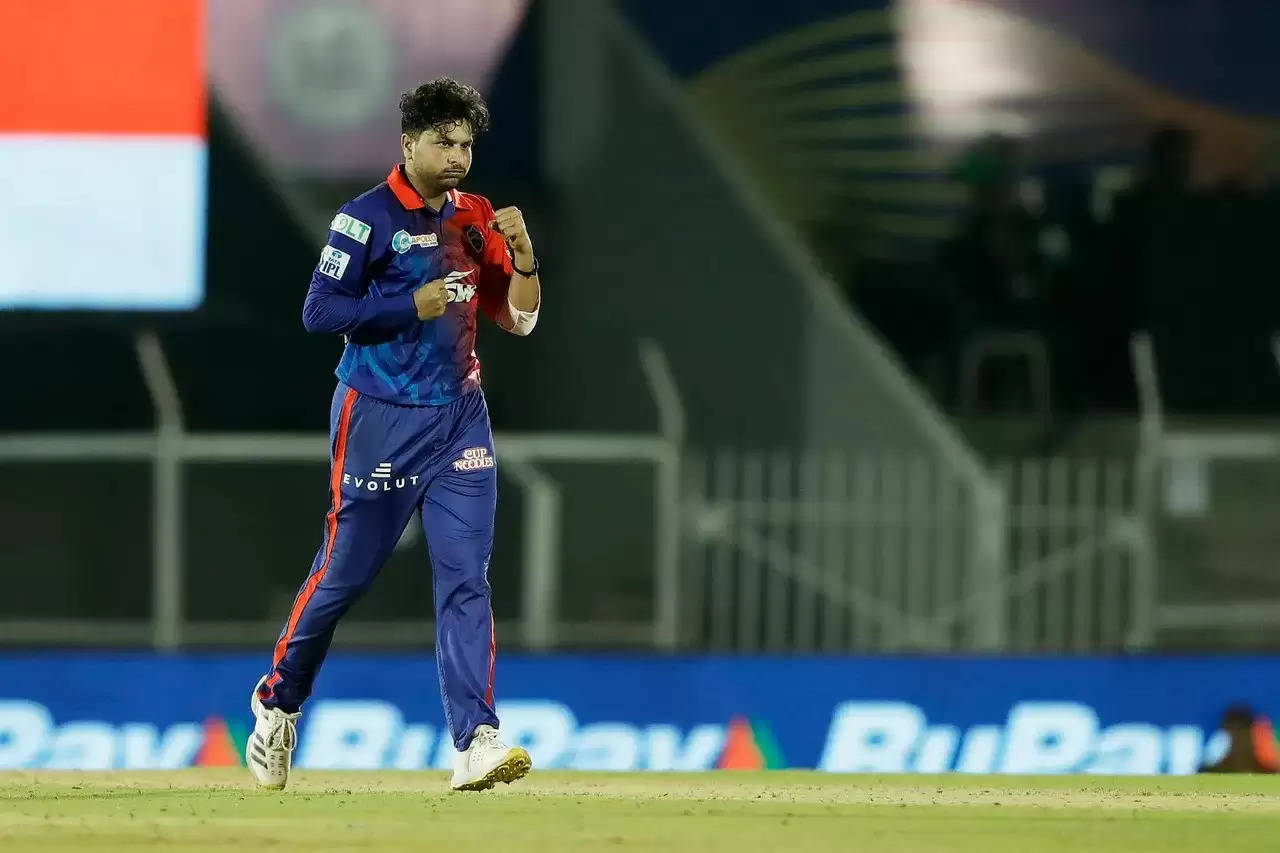 Kuldeep Yadav has the second-best bowling average (11.60) at the moment currently.

Kuldeep Yadav had a majestic start to his career, going through a honeymoon period where he toyed with the batters and took wickets for fun. It was at that time when Kuldeep broke several records - both in international cricket and IPL.

But, like every other cricketer, Kuldeep Yadav, too, went through a rough patch. His variations started looking abortive, and his slow pace allowed batters to read them readily. There were the obvious talks of Kuldeep being found out after he was pummeled in the IPL 2019.

Consequently, Kuldeep played only four matches in the next season and didn't feature in any game in the first leg of IPL 2021. A knee injury during a practice session ruled him out of the second leg of IPL 2021. Everything seemed to go against him, and the road ahead was onerous.

However, Kuldeep Yadav made a strong comeback after crossing several obstacles. Delhi Capitals showed confidence and acquired him in the mega auction of IPL 2022. And, for now, the 27-years old seems to have repaid the faith shown in him.

In the four games so far, Kuldeep has scalped 10 wickets at 11.6 runs apiece. That's already double what he took in the last three seasons combined! Two 'Playerof the Match' awards would have only boosted his confidence further.

What has worked for Kuldeep Yadav?

So, what worked for Kuldeep Yadav since his redemption? The simple answer is that he seems to have worked on honing his defensive skills.

"I worked on his spot bowling," told Kuldeep's coach Kapil Pandey in an interview with Cricbuzz earlier in the year. By spot bowling, he meant landing more balls on a good length area. At the start of his career, Kuldeep's biggest strength was his attacking and fearless bowling. He would bowl full and lure the batters to take him on from there. Even after being hit for a few boundaries, he dared to bowl the fuller length balls again.

But, after a certain amount of thrashing, he, understandably, lost his trust in what was his biggest strength. Since he didn't have defensive skillsets, there was no escaping for him then. It's not that Kuldeep has stopped being attacking now. He still bowls fuller lengths upfront and presses the batters forward. But, now he has worked on dragging his length back immediately after a batter goes hard at him.

For instance, Kuldeep bowled a loopy dipping googly in Shubman Gill's arc on the first ball of the 15th over in the game against Gujarat Titans. Gill, well set on 60, was quick to pounce on it. He hit the ball straight over Kuldeep's head and deposited it into the stands. But, this was where a revamped Kuldeep gave a glimpse of his enhanced defensive expertise. He shortened his length straight away and drifted the ball into Gill. Hence, this flatter delivery didn't let the batter get under the ball.

The old version of Kuldeep would have definitely bowled fuller again. He has snared two wickets in 9 balls when a batter has played him by stepping down the track. Whenever a batter has tried to come down the track, he has pulled back his length shrewdly. He did something similar while bowling to Shreyas Iyer against KKR. Iyer danced down the track and hit a huge six on a full-length delivery. Kuldeep shortened his length immediately to dismiss Iyer on the next ball itself.

ALSO READ: Quinton de Kock reveals why he refused to take a knee

57.44% of his balls have on a good length area this season compared to 55.45% till the last season. Obviously, the sample size is relatively low, but the work done on 'spot bowling' is showing. Kuldeep Yadav has also put in a lot of work in increasing his pace. At the start, his fuller length balls were unrivalled largely due to bowling significantly slow. He was the slowest bowler in the IPL at a point.

But, his pace - that was one of his biggest strengths - became his serious impediment. On the deliveries bowled with a speed less than 80 km/h, Kuldeep's economy rate was 9.73 in IPL 2019 and 2020. 62.16% of boundaries were conceded on the balls bowled on such pace in this timeframe. However, he is bowling much quicker this time around. In comparison to IPL 2020, his pace has surged by more than 5 km/h this season. Around 56.81% of his deliveries have been above 85 km/h this season so far. 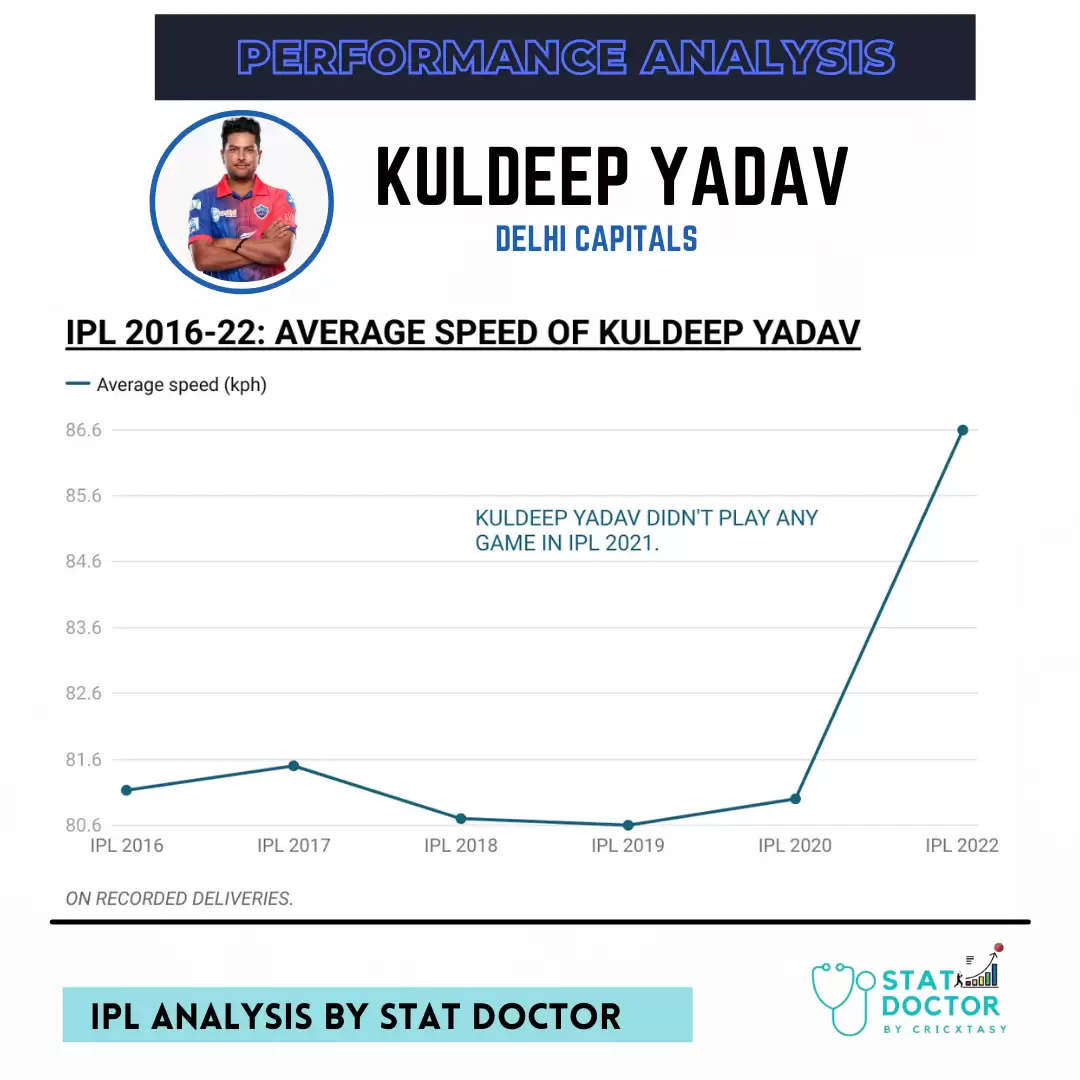 By increasing the pace, Kuldeep manages to push the batters on the backfoot and provide them relatively less time to adjust. The batters have played 23.40% of Kuldeep's deliveries from the back-foot this season compared to 22.22% in 2020.

"I worked on his chinaman and googly," said Kapil Pandey. The major work done was increasing his pace to prevent the batters whack him easily on the front foot. The pace on both - googly and stock ball - has increased drastically this season. While bowling the stock deliveries, Kuldeep's average speed is 86.53 km/h, whereas while bowling the googlies, his average speed is 83.61 km/h. The increase in pace hasn't let the batters differentiate between the two different types of deliveries easily.

Kuldeep Yadav has made some technical tweaks to sharpen his defensive skills. A key change he has made is lowering his trajectory. By doing so, he manages to shorten his length and generate more pace a tad easier than before. The Kanpur-born did somewhat similar against KL Rahul in his second over. He, premeditatedly, lowered his trajectory; bowled flatter and quicker. KL, as expected, jumped down the track but couldn't get to the pitch of the ball and lost his wicket.

Kuldeep has been bowling significantly faster this IPL. He's made 2 noticeable changes to his acton.

1) His non bowling arm is coming down straighter towards the target than previously as indicated in this series of images. This enables him to direct his momentum better.
+ pic.twitter.com/42hXUkCC7H

"Before we were looking at him taking wickets, now we are also looking at trying to stop the batter from scoring runs," explained Kapil. It is visible that Kuldeep is getting better and better with each passing game. His ebullience after Umesh's wicket in the last game signified the amount of hard work he put in to flourish now.