The evolution of T Natarajan

Natarajan has been SRH's trump card with the ball this season, delivering wickets in all phases and in all conditions.
By Naman Agarwal Wed, 27 Apr 2022 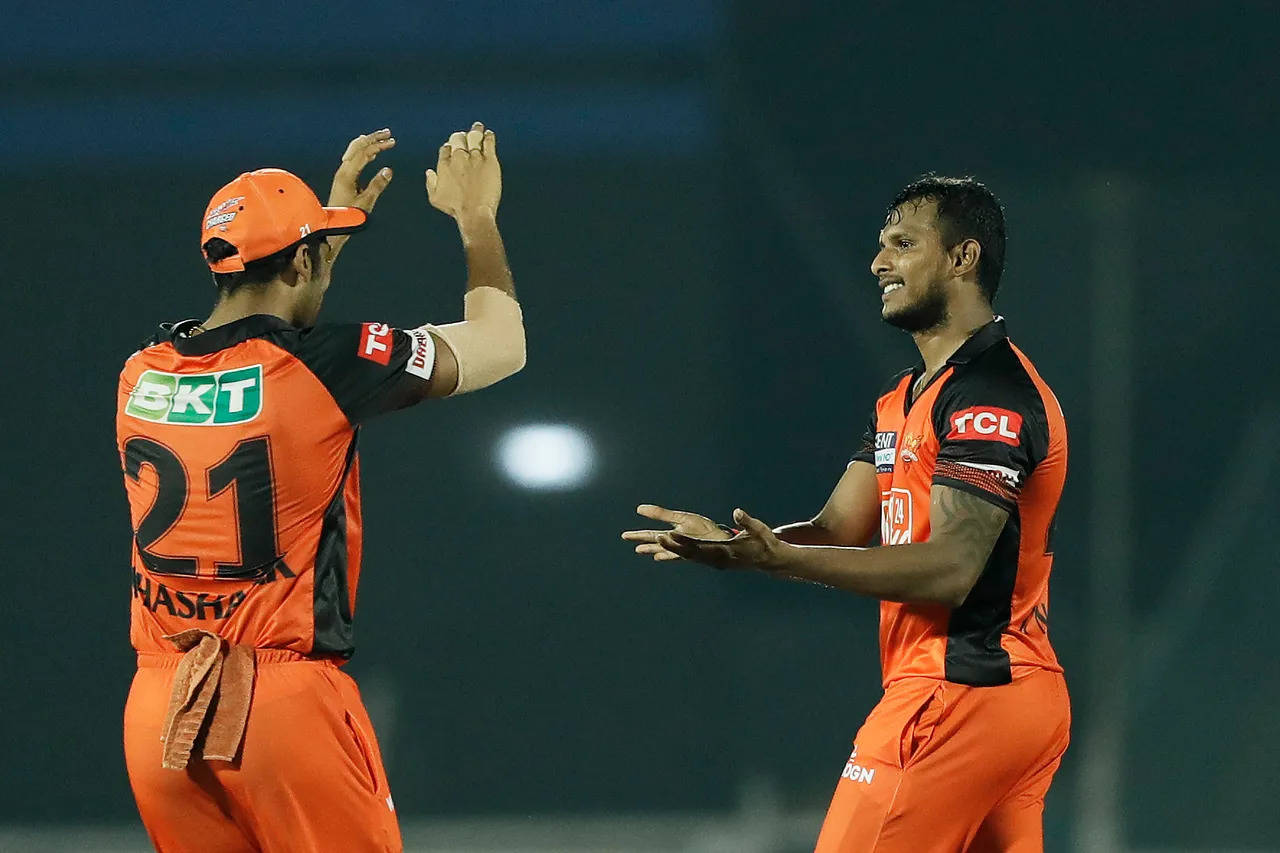 Natarajan has picked 15 wickets in 7 matches at an average of 14.53 and is second on the list of highest wicket takers more than halfway through the tournament.

How many stories have we seen of players bursting onto the scene in the IPL, tasting instant success, and then being found out, only to never be able to replicate that initial level of success again? T Natarajan caught the attention of the world during IPL 2020, went on to play for India in all three formats within 3 months, and then fell off the radar.

While it was injuries that kept him away from the game for an extended period post the 1st Phase of IPL 2021 and he wasn’t actually ‘found out’, him being away from the top level of the game for so long, especially as a fast bowler whose claim to fame was one specific kind of delivery, had everyone questioning whether he was going to be another addition to the list of one-season wonders.

Seven matches in, and Natarajan has triumphantly answered the question with a big, fat “No”. He has already taken 15 wickets in 7 innings at an average of 14.53 and sits second on the list of highest wicket-takers halfway through the tournament. What’s more, he is no longer just the ‘yorker-specialist’ that he has always been in his cricketing career so far. He has developed new tricks and looks like a much more complete bowler now. Prior to this season, he had taken just 3 wickets inside the PP in his IPL career at an average of 53. And it isn’t just about wickets, he simply wasn’t creating the amount of chances in the PP that he is doing now. Between IPL 2020  and 2021, only 15.74% of his deliveries were met with false shots. This year, that number has shot up to 30.56% — almost double. How is he doing that?

The new tricks up Natarajan’s sleeve

Natarajan had come into the limelight for his accurate yorkers in the TNPL, following which he was picked by KXIP in 2017 for 3 Cr. He played six matches for them in 2017, sat on the bench for the next two seasons, then had a breakthrough one for SRH.

All this while, it was his unmatched accuracy with the yorker, along with the left-arm angle, which had kept him relevant. So much so, that in IPL 2020, he had bowled 54 yorkers — most by any bowler. The next highest was 29 yorkers by Jasprit Bumrah — nearly half of what Natarajan had bowled.

But the Natarajan of 2022 is no longer a one-trick pony. In the long injury lay-off which he had, he seems to have worked on getting the ball to move both ways, in the air and off the pitch, and it has shown. He has got wickets off balls that have both moved away from the RHB and come back in to the RHB.

Fig 2 and 3 show close-ups of the seam position of the balls Natarajan bowled to Harshal Patel and Ruturaj Gaikwad respectively. Look how the seam is perfectly angled towards the slips in Fig 2 and how it is ever so slightly tilted towards fine leg in Fig 3. Guess what happened in those balls? Harshal was beaten on the outside edge and Ruturaj was beaten on the inside edge. Both had their stumps knocked over.

Between IPL 2020–2021, almost 40% of Natarajan’s deliveries were either yorkers or full tosses. Basically nearly half the time he ran in to bowl, it was with the intention of bowling a yorker. This year though, his pitch map looks more like that of a traditional pacer, with the concentration being highest on the good length (35%) and around 26% of balls being yorkers or full tosses. Natarajan has faced adversity all his life. From growing up in poverty to being called for suspect action within one year of his state debut. From warming the benches in the IPL after a not-so-successful start to being on top of the world and then being out of the game due to a series of injuries and illnesses.

No matter what life has thrown at him, he has always found a way to deal with it and come back better. So, him coming back with more weapons in his armory after a break shouldn’t really come as a surprise.

Evolution works on the theory of ‘survival of the fittest’. Natarajan has time and again proved in his cricketing journey that he is the fittest, and now he is showing that he is ready to evolve. If he keeps continuing with his processes and keeps on delivering the goods for the remainder of this season, he might very well find himself on another flight to Australia, this time for the T20 World Cup.