Asia Cup 2022: 'Raw emotions and celebrations' from Pakistan players after their win over India

Babar Azam and company were seen soaking in their moment of joy after an impressive win against the arch-rivals.
By Kashish Chadha Mon, 5 Sep 2022 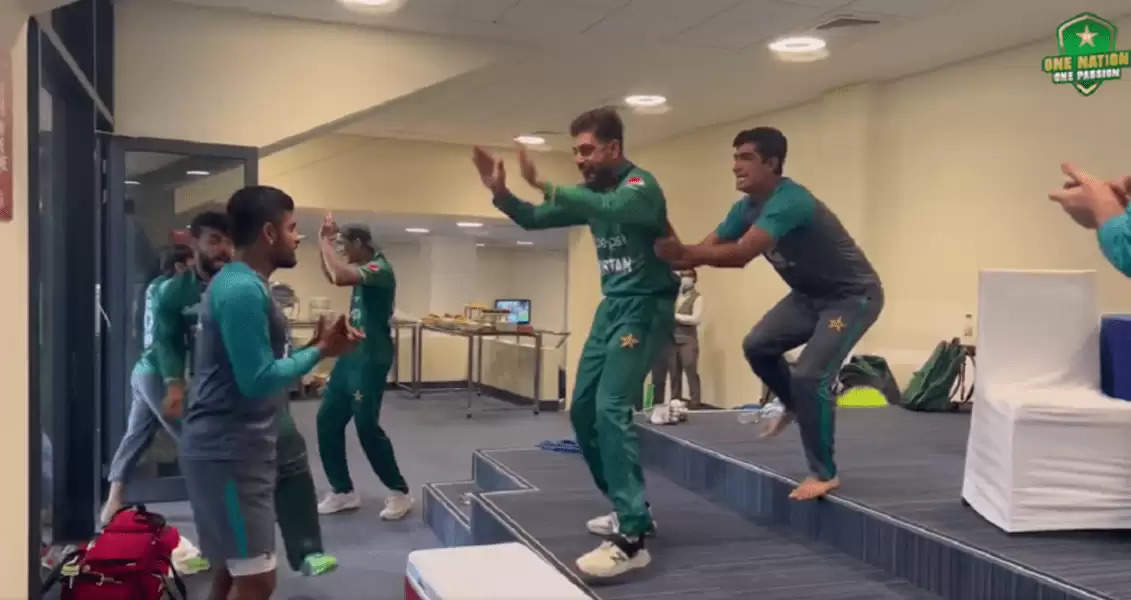 Pakistan chased down India's daunting 181/7 to kick-off their Super 4s campaign for the Asia Cup 2022 with a bang.

Pakistan players were seen expressing their "raw emotions" and celebrating the Super 4s stage victory against India in Dubai on Sunday (September 4) for the Asia Cup 2022.

The Babar Azam led side had a split of emotions and went up and down with their reactions for a while seeing the on-field happenings from inside the dressing room.

They finally breathe a sigh of relief and stood jubilant in the shed when Pakistan reached home on the penultimate ball of the innings, chasing down India's massive 181/7 in good batting conditions under pressure.

In a clip posted over their official Twitter handle, Pakistan Cricket Board (PCB) unveiled how the likes of Babar and his younger teammates Shadab Khan and Naseem Shah led the celebrations for the night inside the team dressing room.

The clip is of the final three-minute duration of the keenly followed thriller in the Middle East, where Pakistan cricketers were seen feeling the nerves and the tension that their teammates Asif Ali and Khushdil Shah felt on the ground, before erupting in a bundle of sheer joy.

The bandwagon was led by skipper Babar Azam, the glee on whose face was there for everyone to see as he stood beside the glass shield that covered the space just before the boundary cushion.

Behind him, as witnessed in the clip, were Shadab, Naseem, Mohammad Hasnain, Haris Rauf and members of the coaching staff, keenly awaiting the final result.

The moment Pakistan finally hit their winning run, these players were seen shouting, and hugging each other in happiness while soaking in their moment of joy for another very impressive victory against the arch-rivals at the same ground they defeated them during the T20 World Cup in UAE last year.

The raw emotions, the reactions and the celebrations 🤗

🎥 Relive the last over of Pakistan's thrilling five-wicket win over India from the team dressing room 👏🎊#AsiaCup2022 | #INDvPAK pic.twitter.com/xHAePLrDwd

After their defeat to India in the group stage, Pakistan have been a side rejuvenated, having clinched wins in the previous two games, including the one against Hong Kong.

With their latest victory, the Asian giants also took a big leap towards the tournament final. They next face Afghanistan on Wednesday (September 7).