Before the intense Group A encounter in Dubai, Rohit Sharma and Babar Azam met each other and shared a laugh.
By Kashish Chadha Sat, 27 Aug 2022 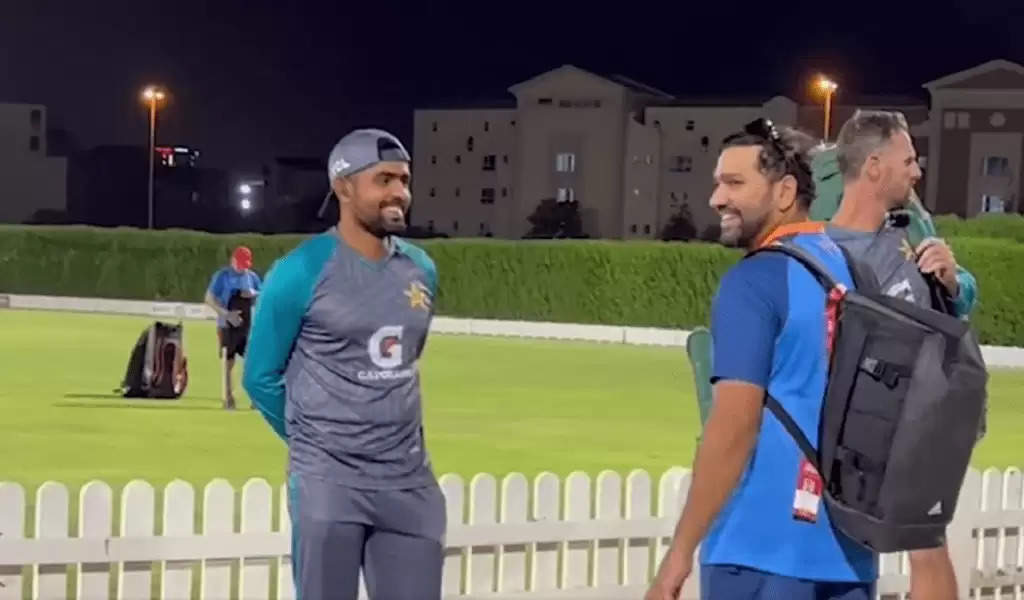 Babar Azam and Rohit Sharma had a fruitful conversation prior to the Asia Cup 2022 encounter in Dubai.

Before they step on the field with all their intensity and passion for the much-awaited India versus Pakistan clash for Asia Cup 2022 on Sunday (August 28), captains Rohit Sharma and Babar Azam were seen sharing a few lighter moments off the field.

Rohit and Babar met and greeted each other with a smile before the high-voltage encounter in Dubai, as the two countries look to make a winning start to their campaign at the regional event held in the T20I format for the second time.

Rohit, leading the defending champions India, who won the inaugural edition of the tournament in 2016, had a fruitful conversation with his Pakistani counterpart.

The interaction took place at the training facility in Dubai where both the teams underwent their final round of preparations for the Group A fixture in the six-team cometition that kicks off a day earlier on August 27.

A heartening clip of Rohit Sharma and Babar Azam interacting with each other was shared over Twitter by the Pakistan Cricket Board (PCB) on the eve of the India-Pakistan fixture in Dubai.

As they finished off their respective training sessions, Rohit and Babar made a point to talk to each other, with the duo quering over each other's health and game before indulging in laughter as their conversation shifted to something funny.

By the looks of it, it was Rohit who began the fun part, leaving Babar in splits with his innate humour. It wasn't clear what exactly the two told each other but one could feel a great sense of respect for each other in their eyes and excitement about the contest ahead.

India and Pakistan are part of Group A of the six-team regional tournament alongside associates Hong Kong. Their clash on Sunday will be the 16th occasion the two countries meet in the Asia Cup and the second in the competition's T20I version.

The match kicks off both the teams' build-up to the T20 World Cup 2022 in Australia, where they will be meeting in a Super 12 game on October 23 in Melbourne.