Shaheen Afridi was seen having a quick conversation with Virat Kohli in a PCB clip ahead of the Asia Cup.
By Kashish Chadha Fri, 26 Aug 2022 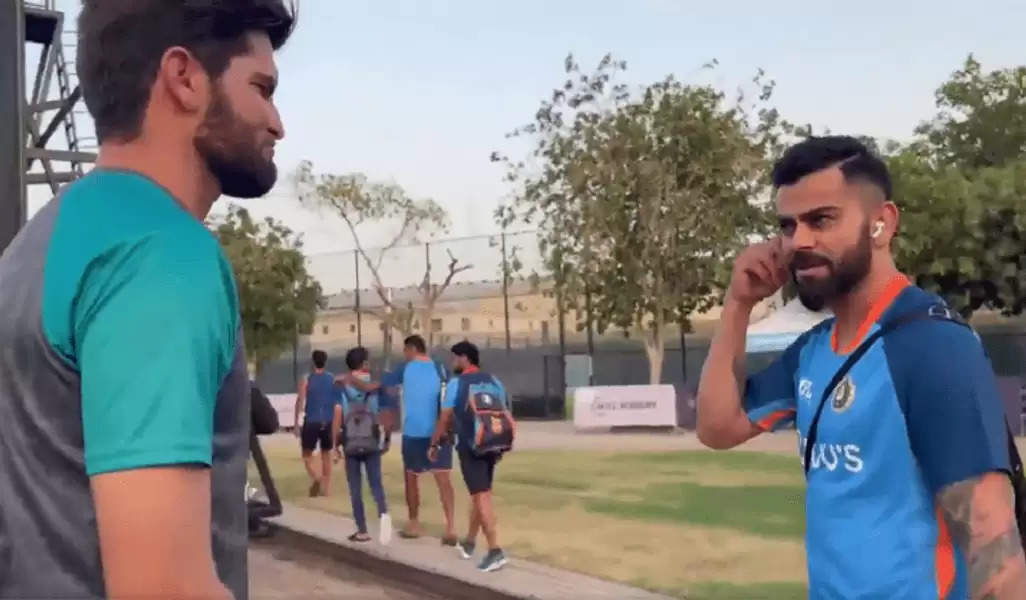 In training mode, Virat Kohli shared a lighter moment with injured Shaheen Afridi before the Asia Cup clash versus Pakistan.

A clip posted over Twitter by Pakistan Cricket Board (PCB) is warming hearts across the border ahead of the much-awaited Indo-Pak clash for Asia Cup on Sunday (August 28).

In the clip, cricketers from both countries are seen greeting each other with a smile and wishing their opponents well before they step on the field for the high-voltage clash in Dubai.

The most notable feature of the clip posted on Thursday (August 25) was Pakistan speedster Shaheen Afridi sharing a lighter moment with India's batting great Virat Kohli.

Afridi, ruled out of the tournament with a knee injury, is in Dubai to undergo rehab for the same. But he made a point to greet Kohli and shake hands with him, while the former India skipper was going back to the dressing room after completing his practise session and spotted the left-arm quick.

But fans were left curious as to what was said between the two individuals since the music playing at the back inside the PCB feature clip was too loud and it couldn't be clear what exactly Shaheen was telling Virat Kohli in that moment.

In a different clip posted on Twitter by the Pakistan board, one can hear the back and forth between Shaheen and Kohli without the music at the back.

The clip revealed how Shaheen innocently told Kohli that his fans in Pakistan have been praying for his bumper return to form with the bat.

The conversation started with Kohli initially enquiring about Shaheen's knee injury and the gear he was wearing to protect his leg, before transitioning to Shaheen talking of the modern-day legend's slump over the past few seasons.

Also Read - Asia Cup 2022 Live Streaming Details: When and Where to Watch Asia Cup 2022 LIVE on TV in India, Pakistan and Bangladesh, Schedule, Fixtures, Teams, Squads, Venues and All you need to know

The suspense is over! Let's listen to the conversation between @iShaheenAfridi and @imVkohli 🔊#AsiaCup2022 pic.twitter.com/ttVYLrNtuO

The Shaheen-Kohli dual would've been most the exciting feature of the India-Pakistan clash in Dubai if not for the former's untimely injury. Shaheen got Kohli out the last time the two countries met a year before at the T20 World Cup.