Haris Rauf and Virat Kohli had a fruitful conversation that ended with India great offering the Pakistan seamer his signed jersey.
By Kashish Chadha Tue, 30 Aug 2022 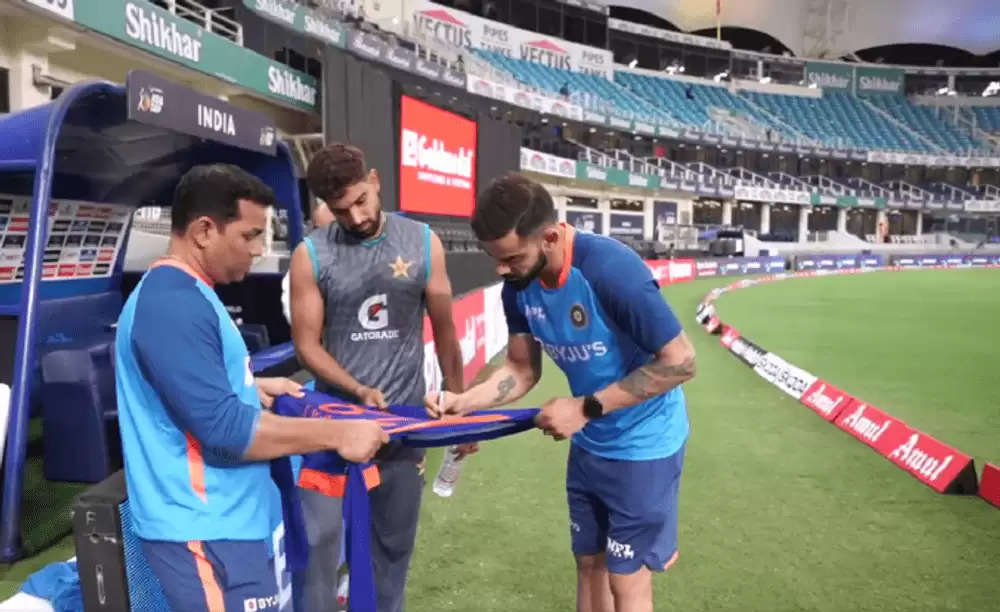 Virat Kohli made a heartening gesture towards Haris Rauf after the clash with Pakistan for the Asia Cup 2022.

Rauf was seen having an after-match chat with the former India skipper, who then made a heartening gesture by giving away a signed jersey of his to the Pakistan cricketer.

The duo had a healthy chat after the match, querying over what happened on the field and how they are doing off it, with Kohli seen giving Rauf inputs about the game while the Pakistan seamer nodded to the Indian great.

After their conversation, Virat Kohli was seen signing his Indian team shift and giving it away to Rauf as memorabilia for the young cricketer to savour with him. Rauf had an evident sense of gratitude in his eyes towards Kohli as he took the shirt and walked back inside the Pakistan dressing room.

Foes on the field, friends off it. Virat Kohli had a smile to offer to Rauf, who indulged in a fruitful conversation with the modern-day legend before the talk ended with the former gifting away his signed shirt in a heartening gesture.

The clip of the amusing incident was posted over Twitter by the BCCI, calling it a moment that shined beyond the exciting encounter that the two countries just played out in front of a packed stadium in Dubai.

The match may be over but moments like these shine bright ✨👌

A heartwarming gesture by @imVkohli as he hands over a signed jersey to Pakistan's Haris Rauf post the #INDvPAK game 👏👏#TeamIndia | #AsiaCup2022 pic.twitter.com/3qqejMKHjG

Notably, this wasn't the first time Rauf had an interesting meet and greet with Virat Kohli, who faced him during an India net session back in 2019 in Australia. While Rauf had travelled Down Under as one of the two Lahore Qalandars pacers sent on a training camp, Kohli was there for India tour of Australia in 2018-19.

The Indian batter faced the Pakistan seamer in a net session at the iconic SCG ground in Sydney prior to the New Year's Test against the Australians. During that stint arranged by the Qalandars, Rauf also had the chance to play for Hawkesbury cricket club.