The Indian trio found a place in ICC's T20 World Cup 2022 playing XI, featuring the tournament's best performers across the board.
By Kashish Chadha Mon, 14 Nov 2022 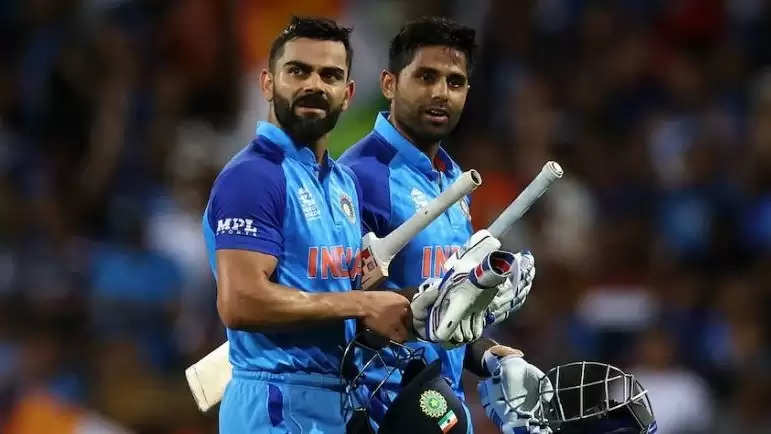 Even as India suffered a bitterly painful loss in the semifinal to England and crashed out of the tournament, three of their players were named part of the ICC's Team of the Tournament for the T20 World Cup 2022 in Australia on Monday (November 14).

The ICC confirmed the great Virat Kohli and his middle-order partner Suryakumar Yadav in the playing XI featuring the best performers from the three-week competition Down Under, with premier allrounder Hardik Pandya named as the 12th man.

Kohli finished the competition as the leading run-scorer with 296 runs from six innings, including four measured half-centuries. Suryakumar ended third in the runs tally for the tournament with 239 runs from his six innings, featuring three terrific fifties.

Pandya made valuable contributions to the side with the bat and the ball. Playing knocks of real substance against Pakistan and England, he finished with 128 runs and also bagged 8 wickets in his third T20 World Cup on the bounce.

His efforts in the tournament were overhauled by those from the allround duo of Zimbabwe's Sikandar Raza and Pakistan's Shadab Khan. Why, Pandya couldn't make the cut for the main playing XI despite his reasonably healthy campaign in both skills.

Both Raza and Khan made a bigger impact on their team's fortunes: while Raza was Zimbabwe's go-to man throughout and made 219 runs, apart from bagging 10 wickets, Khan came up with 11 scalps and a match-winning fifty against South Africa during the Super 12s stage.

England's aggressive opening duo of Alex Hales and Jos Buttler also found a spot each for themselves at the top in ICC's T20 World Cup XI. Buttler and Hales, who absolutely hammered India in the semifinal in an unbeaten stand, finished as the two leading men for England in the runs chart.

Buttler smashed 225 runs at a strike-rate of 144.23, Hales made 212 of those at a rate of 147.22 at his end. Their impact meant the eventual champions' middle-order had not much to do until the final when Ben Stokes proved to be their big-night hero once again.

New Zealand's rising middle-order assaulter Glenn Phillips was slotted No.5 in the line-up, just below the Indian duo of Virat Kohli and Suryakumar Yadav, after finishing as his team's highest run-maker. His 201 runs from five innings included an excellent century versus Sri Lanka on a dry surface at SCG.

The bowling attack in ICC's T20 World Cup 2022 XI feature two left-arm quicks in Pakistan spearhead Shaheen Afridi and England's rising young allrounder and 'Player of the Tournament' Sam Curran. After a slow start following an injury rehab, Afridi got into his own and took 11 wickets at an ER of only 6.15.

Curran also used his left-arm angle to good effect on Australian surfaces that offered him a semblance of seam movement at the start of the summer and bagged 13 scalps at an excellent economy rate of 6.52 over six games.

To round off the attack, ICC named two high-end speedsters Anrich Nortje and Mark Wood in the line-up. Wood couldn't take part in the knock-outs stage due to injury scare but picked up 9 wickets from his four games during the Super 12s round, where Nortje, too, made the ball talk and picked up 11 wickets from five matches.