The Indian skipper indicated that the left-hander will once again pave way for Dinesh Karthik at the Adelaide Oval.
By Kashish Chadha Wed, 9 Nov 2022 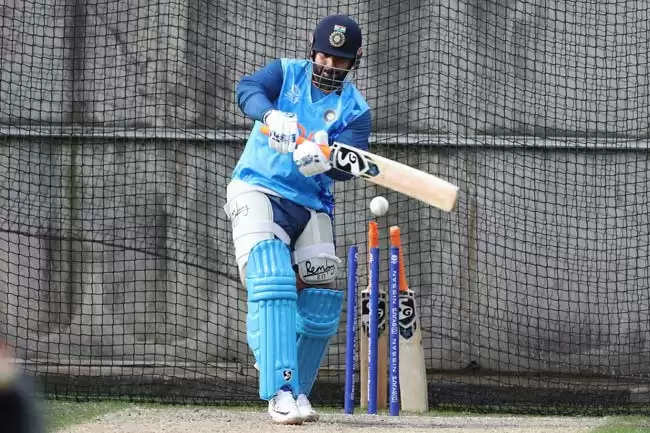 Rohit Sharma made a subtle hint Rishabh Pant will be back on the bench for India's much-anticipated T20 World Cup 2022 semifinal clash with England on Thursday (November 10).

As India gear up for the marquee encounter in Adelaide, their skipper indicated the middle-order might be returning to the sidelines and experienced wicketkeeper-batter Dinesh Karthik could be back in the side.

Speaking to the press on the eve of the semifinal, Rohit said the move to rest Karthik for Pant in their final Super 12s game versus Zimbabwe was a "tactical" one as the think-tank wanted to keep all their options open before taking on England.

The captain stressed since Pant had only featured in the two unofficial warm-up games against WA on tour, it was important to give him some time in the middle and keep him ready in case he is required for the knock-outs stage. Pant kept the whole of Indian innings with the ball after making 3 off 5 balls against Zimbabwe at MCG on Sunday (November 6).

Rohit Sharma on Pant or DK?

"Pant, I said it before the last game, as well, Rishabh was the only guy who didn't get to play on this tour at all except the two games that we played in Perth. That was an unofficial practice game," Rohit said.

"But since then he hasn't had a hit, and he was the only guy who was missing some game time, so we wanted to give him some time and have some options, as well, whether if we want to make changes in the semis or the finals, we should be able to do that."

"It would be unfair to just bring the guy from nowhere and make him play the game, so that was the thought. But again, at the same time we've told the guys right from the beginning that everyone needs to be ready for whichever game that they have to play, whether it's semis, final, lead games. They've got to be ready for it," he added.

Prominent voices, including former India head coach Ravi Shastri, have called in for persistence with Pant, who is considered the better of the two fits than Karthik for conditions in Australia.

The wicketkeeper was India's first choice in the middle order before his struggles brought Karthik back into the reckoning ahead of the World Cup. Rohit said both the batting keepers are in contention for a spot before the semifinal.

"It (playing Pant) was a little tactical, as well, considering we were not knowing which team we would be playing in the semis before that Zimbabwe game, so we wanted to just give a left-hander an opportunity to counter some of the spinners who bowled in the middle for New Zealand and England."

"That was the thought, and we thought Rishabh was the guy for us to go and give him some time, as well.But again, what is going to happen tomorrow, I think I won't be able to tell you right now, but both of the keepers will be in play for sure," Rohit added.

Karthik had the chance to settle the debate by continuing his good work as an end-overs aggressor for India. Historically a success at the tough job in the batting line-up, he collected only 14 runs from his three innings before being sidelined with an injury scare. On his part, Pant only fuelled India's headache by himself failing in his only opportunity with the bat.