The West Indies allrounder had a run penalty imposed on his team in the T20 Blast 2022 game.
By Kashish Chadha Mon, 20 Jun 2022 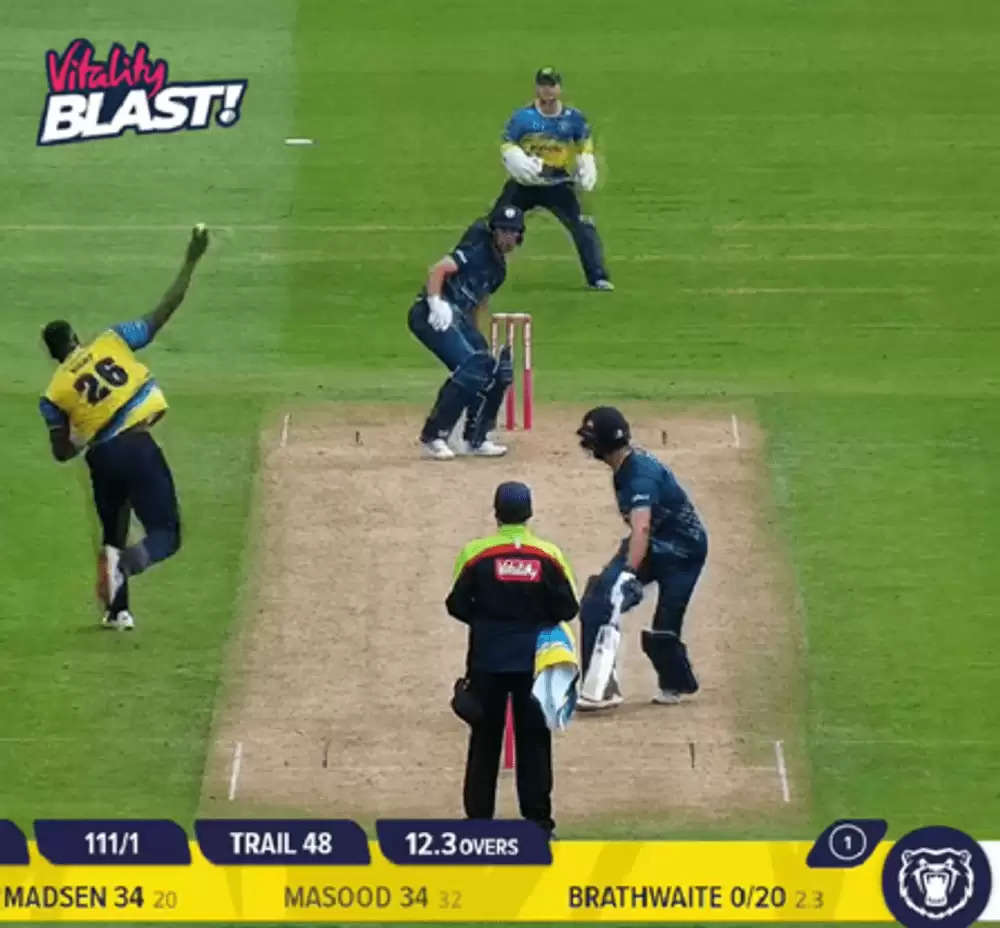 Warwickshire paid heavily for their allrounder's mistake as they conceded six runs off the delivery to Derbyshire.

Carlos Brathwaite's misdirected throw proved costly for Warwickshire in the T20 Blast 2022 on Sunday (June 19), as the club paid for the physical harm to Derbyshire batter Wayne Madsen with a five-run penalty.

Brathwaite was at fault in the entirety of the incident, as he picked up the rebound off the bat of Madsen and turned around before unveiling a dangerous throw that hit the batter on his legs.

The batter immediately grimaced in pain and looked towards the on-side umpire, gesturing in complaint, before realising he had the opportunity to quickly sneak in an extra run for the overthrow off the hands of the West Indies allrounder.

As Madsen and his batting partner Shan Masood went for a run, the front-on umpire quickly had a word with Brathwaite, who tried to explain his side of the story but couldn't avoid his team from getting imposed with a penalty.

For the umpires, the consideration for the penalty was made way too simple by the fact that Madsen had made no visible attempt to move outside his crease upon finishing his stroke. And the throw from Carlos Brathwaite was thus deemed completely unnecessary to the proceedings.

The right-arm seamer rolled around in his follow-through after collecting the ball and returned to his original position to make a needless aim for the stumps with Madsen standing in front of the three sticks.

Brathwaite then apologised for his mistake to the umpires and the Derbyshire batter, but that didn't help the Warwickshire's cause, as their allrounder's mistake cost them six runs off that ball without being hit for a maximum - one for the overthrow and five for the penalty.

Not ideal for Carlos Brathwaite 😬

A 5-run penalty was given against the Bears after this incident...#Blast22 pic.twitter.com/pXZLGcEGYa

The official Twitter handle of the Vitality Blast T20 shared an entire clip of the incident, with Brathwaite seen apologising to the batter for his ill-advised throw but failing to avoid the five-run penalty imposed by the two umpires following a brief discussion. Madsen scored 55 off 34 with five fours and three sixes to power Derbyshire to a seven wicket win with 11 balls to spare.