WATCH: Cheteshwar Pujara smacks Shaheen Afridi for a six on the way to another hundred in the County Championship 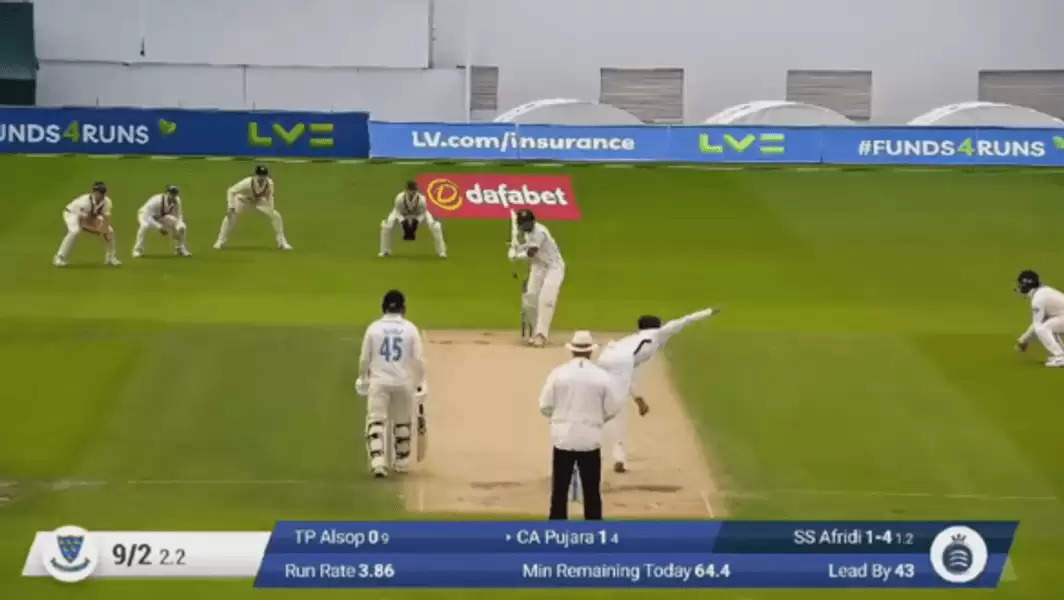 Heading into the Sussex versus Middlesex County Championship game, the battle most were anticipating even more than the game was between India great Cheteshwar Pujara and Pakistan's rising pace sensation Shaheen Afridi.

There was a great sense of excitement amongst fans from across the border for an otherwise low-key Division 2 first-class fixture in England. The Pujara-Afridi face-off was perhaps the biggest selling point of this week's Championship game in Hove.

And, much to the pleasure of Indian fans, it is Cheteshwar Pujara who won the early rounds of the one-on-one battle with Afridi, getting his innings going with a fantastic six against the Pakistan left-arm quick.

Pujara upper-cut Afridi for a six early into his stay at the crease, smashing a bouncer from the pacer up and over the deep third-fielder.

Having just walked in at No.4 with Sussex losing two early wickets before ever reaching the 10-run mark, Cheteshwar Pujara was expected to be circumspect and bat in his usually sedate manner to try and calm the proceedings for his team.

But while the veteran batter was looking to stick to the norm at the start of his innings, his eyes lit up seeing a rare hit-me ball outside the off-stump from Afridi, who pitched it short and got one to move across the right-hander.

However, the tall-statured Pujara was up to task and gave the ball the full monte for a shot that sailed well over the deep-third fielder for a maximum. A clip of same from Sussex's YouTube channel is doing the rounds on Twitter, with the quality of Pujara's stroke leaving even Afridi shell-shocked.

It was only the fifth ball of his innings but an in-form Cheteshwar Pujara was in no mood to let the scoring opportunity go, especially as it allowed him to stamp early authority into his riveting battle with Afridi.

Ever since the start of his latest county stint, Pujara has been in tremendous touch with bat in hand, scoring two double hundreds and one hundred in the previous three games.