Jos Buttler went on a rampage against Kagiso Rabada before losing his wicket to a strange shot behind square.
By Kashish Chadha Sat, 7 May 2022 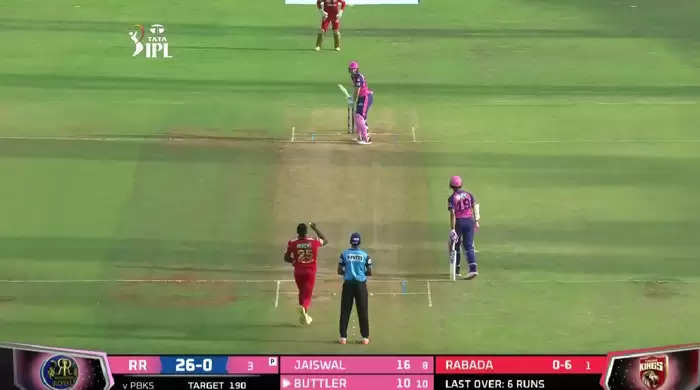 Kagiso Rabada followed Jos Buttler with a full-pitched ball and got him on an attempted scoop that went wrong.

Rajasthan Royals (RR) opener Jos Buttler hammered Punjab Kings (PBKS) lead pacer Kagiso Rabada for 20 runs before the bowler got his own back by dismissing the explosive right-hander on an attempted scoop in an IPL 2022 game.

In a riveting dual seen at the iconic Wankhede Stadium on Saturday (May 7) afternoon in Mumbai, Buttler unleashed his wrath on PBKS' renowned quick, taking him to the cleaners for the best part of the over before the South African speedster got him caught at the edge of the circle.

The explosive England batter tried to lap the ball over the in-field through the fine-leg region, but Rabada kept following him and induced a weird stroke that fell safely into the hands of the short-third fielder behind square on the off-side.

Till his dismissal, Jos Buttler had batted like a dream, hitting Rabada for 6, 4, 4, 2, 4 off the first five balls of his over. But eventually the right-arm quick won the much-anticipated battle against his English counterpart.

Kagiso Rabada has the last laugh in battle against Jos Buttler

The eye-catching dual hit its peak in the fourth over of Royals' run-chase against PBKS, trying to overhaul their daunting 189/6 in a critical league stage encounter of the tournament.

With a victory crucial to either team's playoff hopes, Jos Buttler decided to target PBKS' spearhead, unleashing a brutal onslaught against the South African quick.

For the first five deliveries of the over, Rabada had no safe response to the in-form Royals opening batter, who blazed his willow for a maximum followed by three fours.

But perhaps Buttler went for one shot too many for the over, as he moved early into his position to play a scoop behind square on the on-side, only to be done in by straight ball from Rabada which he could only lob into the hands of the short-third fielder.

The wicket would've given Rabada the last laugh in his keenly followed battle with Jos Buttler and a sigh of relief for Punjab franchise, for the England and Royals opener was eyeing another major score for the tournament.