Sai Sudharsan suffered one of the rarest forms of dismissal in GT's run-chase versus MI in IPL 2022.
By Kashish Chadha Sat, 7 May 2022 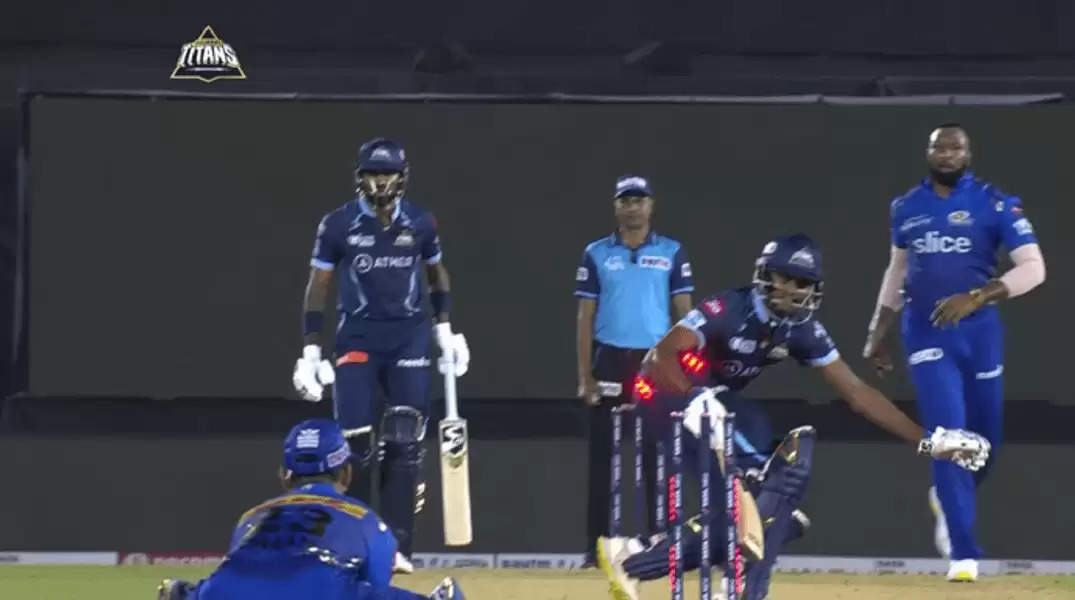 Sai Sudharsan was done in by a slower ball on an attempted pull that later crashed onto the stumps.

Attempting a pull shot with brute force, Sudharsan was found too early into his stroke before his bat collided with the stumps in full flow and momentum.

The batter was left to rue the dismissal, as he not only missed an on-side boundary but also had to pay the ultimate prize for trying to over-hit the ball.

It was a moment of great misfortune for Sai Sudharsan, whose bat thumped onto the stumps, ensuring the rarest of rare forms of dismissal for the uncapped Indian left-hander.

Sai Sudharsan gets out hit-wicket

The dismissal was seen at the close of the 16th over in Titans' run-chase. With his team eyeing another 40 runs off the remaining 25 balls, Sai Sudharsan was looking to smash Pollard, MI's designated sixth bowler for some boundaries.

The batter saw a short-pitched ball from the Caribbean right-arm medium pacer was went for a full-blooded pull shot, only to be done in by the lack of pace on the delivery.

The slower ball from Kieron Pollard gripped on the surface at the Brabourne Stadium in Mumbai and found the left-hander way too early into his stroke. By the time the ball reached Sudharsan, he had already gone through with his stroke.

But so forceful was Sudharsan's attempted pull that he could never revert his bat from jamming onto the stumps. The bat moved in such speed and momentum that it ended up colliding with the three sticks behind the batter's stance, leaving him dismayed to be out in the most unfortunate fashion.

Up until that moment, Sai Sudharsan, the Tamil Nadu batter, had looked in impressive form at the crease. During his brief 11-ball stay in the middle, the batter looked good on the front and the backfoot against MI's quicks, hitting one four and one maximum whilst he was there.