Devon Conway fell short of what looked like a straightforward maiden IPL century to his name for CSK.
By Kashish Chadha Sun, 8 May 2022 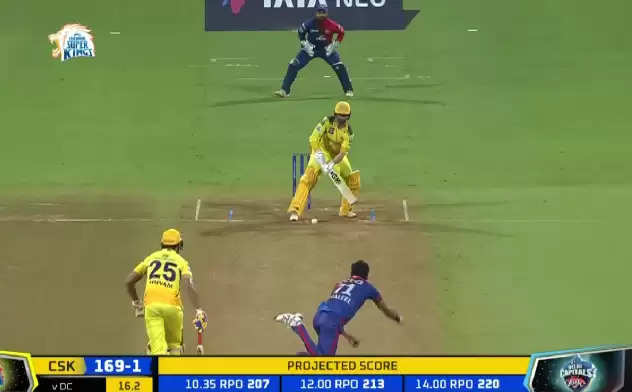 Devon Conway got out on a miscued scoop after batting tremendously for his 87 off 49 balls.

In-form Chennai Super Kings (CSK) opener Devon Conway missed out on an IPL century to his name after falling off an attempted scoop that flew only as far as the hands of Delhi Capitals (DC) keeper Rishabh Pant in an IPL 2022 league game on Sunday (May 8).

The left-hander tried to lap DC left-arm quick Khaleel Ahmed for another boundary to add to his tally of 87, which he had reached in just 48 balls. But on the 49th, he was done in by the lack of pace on the delivery from Khaleel and could only miscue his stroke to a diving Pant behind square on the on-side.

Khaleel outfoxed the New Zealander with a slower delivery, which robbed him of optimum connection on his stroke as the ball hit the splice of his willow and went into the hands of Pant at diving height to his far right.

Pant did well to cover the ground after having to adjust to Devon Conway's movement across the crease while attempting his scoop shot and took a brilliant catch.

It was a fantastic team act on the part of Khaleel and his skipper Pant as they denied Devon Conway what looked like a straightforward century.

Batting on 87 off 48, the batter was expected to race to his maiden IPL hundred in CSK colours until he was done in by a slower ball from Khaleel which went only as far as Pant's hands.

Seeing Pant go for the catch and take it comfortably would've been extremely disappointing for Conway, who would've hoped to secure his first-ever hundred for the MS Dhoni led four-time champions.

But, while obviously dismayed at his dismissal, Devon Conway would've also been pleased to have majorly contributed again to CSK's cause. The left-hander has looked in imperious touch since his return to the playing XI after being curiously left out initially through his team's campaign.

The 30-year-old has scored 231 runs from his four innings of the tournament so far, averaging 77 while striking at an eye-catching 155.03. CSK would hope that he can continue in this vein as their playoff chances hang on a thin rope.