WATCH: Shami bounces out KL Rahul; second dismissal to a seamer in the season

KL Rahul got out miscueing his attempted pull shot off a bouncer from Mohammad Shami.
By Kashish Chadha Tue, 10 May 2022 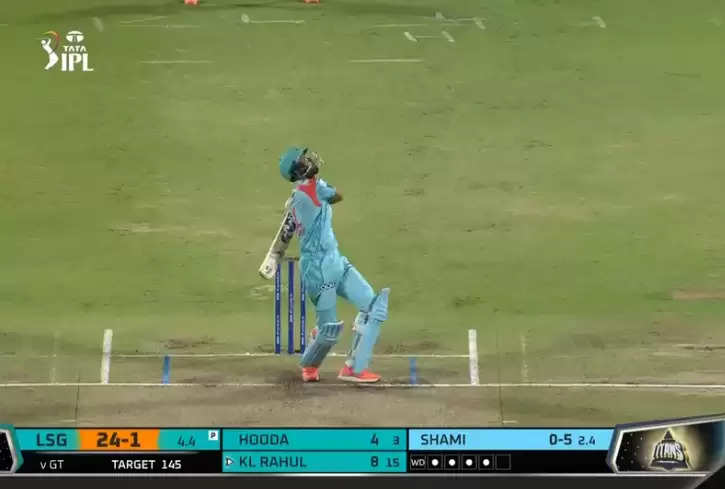 KL Rahul was out for the second time of the season against Mohammad Shami in the GT-LSG rivalry for IPL 2022.

After doing him in with an outswinger earlier in the tournament, Mohammad Shami stamped his authority over KL Rahul again in IPL 2022 on Tuesday (May 10). The experienced Gujarat Titans (GT) seamer got the  Lucknow Super Giants (LSG) skipper bounced out caught in Pune.

The tall-statured Rahul, regarded as one of the better players of the pull and the hook shots among established Indian batters, got out caught off a delivery that got too big on him while attempting his stoke through the on-side.

The elegant right-hander could only get a top-edge on Shami's short-pitched ball and skied it comfortably into the hands of Titans keeper Wriddhiman Saha. For once, KL Rahul was done in by the pace and bounce on a delivery, finding insignificant connection on his stroke to be caught behind.

It was Shami's second dismissal over KL Rahul in IPL 2022. In the first one, which was both teams' campaign opener, he got the right-hander out with a delivery that moved away sharply to induce an outside edge through to the keeper. Even as Rahul tried to evade the ball, it got the splice of his willow straight into the hands of the wicketkeeper.

Now, Shami outfoxed the batter with a short ball. So good Rahul has been against the shorter stuff that most fast-bowlers have felt shy of trying it out against him. But Shami tempted his fate and got the rewards for some perfect execution.

The bowler found steep bounce, with his line cramping the batter for room to free his arms.The shot that Rahul played may have been on, had it not been for those two factors.

Batting on 8 off 15 balls at the time, KL Rahul was relieved of his misery by Shami to leave LSG precariously placed at 24/2 at the end of the fifth over in their quest to overhaul GT's 144/4 on a two-paced surface in Pune.

The innings, however, wasn't reflective of Rahul's form with the bat in IPL 2022. The batter has been a prolific run-getter for his team in the competition, averaging 45.90 for his 459 runs from 12 innings at a strike-rate of 140.26. His tally includes two hundreds and two half-centuries.