WATCH: Krishnappa Gowtham with a hilarious reaction after dismissal; Mitchell Marsh doesn't review despite no edge on bat

LSG off-spinner Krishnappa Gowtham offered a funny reaction to an on-field call in his favour in the game against DC in IPL 2022.
By Kashish Chadha Sun, 1 May 2022 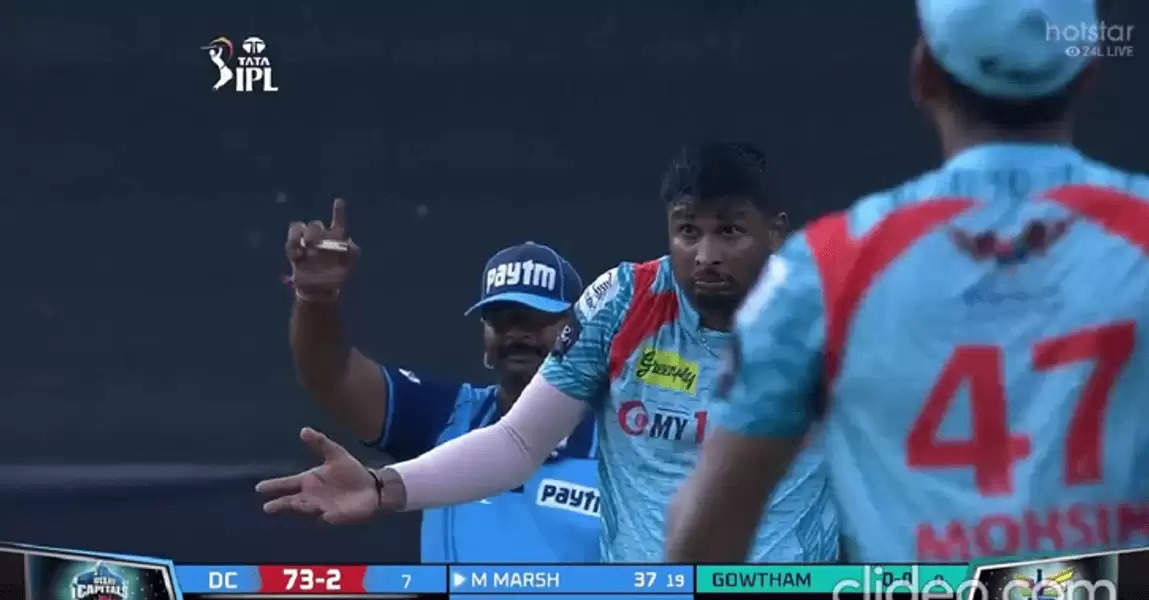 Krishnappa Gowtham got the big wicket of Mitchell Marsh out caught despit no outside edge on the ball.

The Indian cricketer wore a hilarious expression on his face as if to suggest he wasn't expecting the standing umpire to give Marsh out on a caught-behind appeal.

Marsh went for a big heave on a straight ball from the LSG spinner and ended up missing it through to keeper Quinton de Kock, who erupted in a loud appeal for the catch. Moments later, Indian umpire Chirra Ravikanthreddy declared the right-hander out.

Visibly disgusted at himself for missing out on a scoring opportunity, Marsh started making his long walk back to the pavillion. Instantly, Krishnappa Gowtham reacted in a funny manner, offering a sheepish smile with his hands held high in disbelief that the on-field umpire had budged to his team's appeal.

As Marsh reached the DC dugout, a replay on the giant screen confirmed that the batter had gotten no edge off the willow to this delivery, making commentator Harsha Bhogle wonder is that why Krishnappa Gowtham reacted the way he did?

The funny incident of an incorrect call going Gowtham and LSG's way came to light at the start of the eighth over in DC's run-chase. Looking in supreme touch at the time with his 19-ball unbeaten 37, Marsh was beaten on the 20th via a skidder outside from the off-spinner.

The ball looked peerlessly close to the batter's willow on its way to De Kock and that triggered an appeal for the caught behind, to which umpire Ravikanthreddy reacted positively from LSG's perspectively.

While Marsh was obviously dismayed by the decision, Krishnappa Gowtham reacted funnily in the moment, giving away a sense of surprise that he has gotten the decision his way. It was clear that the off-spinner didn't hear any woody sound off Marsh's outside edge.

Marsh did initially think of the review but decided against it, feeling he had indeed gotten a thick edge through to the keeper. The batter would've felt livid when a replay over the ultraedge confirmed that he had not made any contact with the ball. Had Marsh gone for the DRS, he would've continued his innings.


It was another instance that raised doubts about whether the batter is really aware if he has gotten a nick or not? While the ultraedge caught no outside edge on the ball, Marsh felt he had hit it and started walking.
From around the web
Weekly Trending