WATCH: 6646! Rashid Khan launches assault on CSK's Chris Jordan in the 18th over of GT vs CSK clash

Rashid Khan blazed his willow for a tremendous knock in GT's run-chase to pull off an unlikely win against CSK in IPL 2022.
By Kashish Chadha Mon, 18 Apr 2022 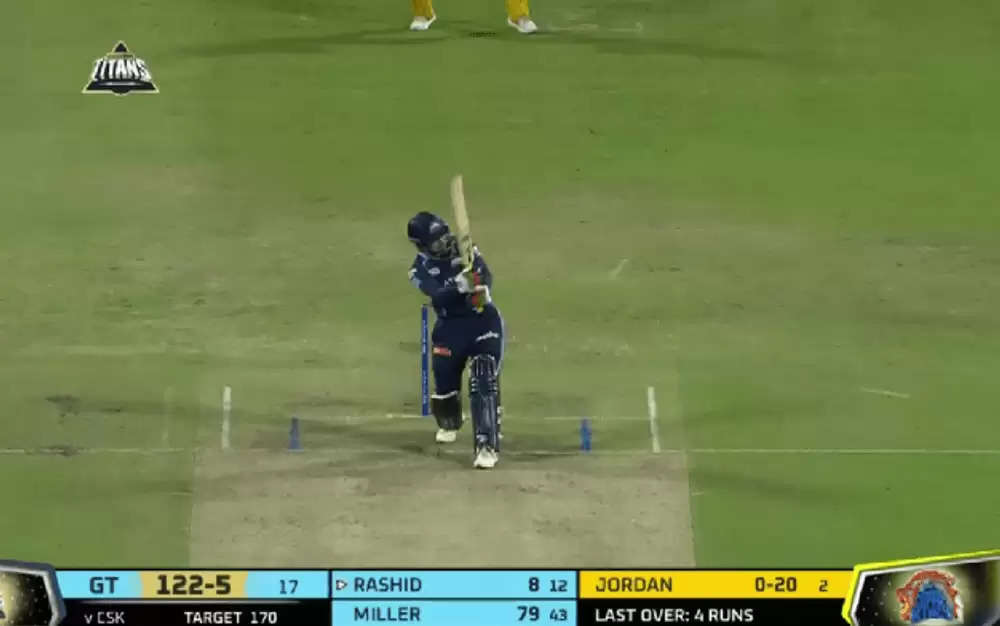 Hitting Chris Jordan for 6,6,4,6, Rashid Khan turned the game on its head.

Rashid changed a game on its head with some tremendous ball-hitting in a crunch situation to bring the Titans right back into the contest against CSK on Sunday (April 17). The Afghan warrior hammered CSK pacer Chris Jordan for a whopping 25-run over when GT were up against it, with 48 needed off the last 3 overs.

Rashid Khan finally unleashed his batting capabilities in the biggest T20 league in the world, smashing Jordan for 3 sixes and one 4 off the first four balls of the over to completely change the game.

Sent out to bat at No.7 to try and provide last man standing David Miller adequate support, Rashid Khan decided to take the onus on his hands and tilted the scales decisively in favour of his team by the time he was dismissed.

The lower-order ball striker played a fantastic cameo, hitting a memorable 21-ball 40 to help Titans achieve victory in their chase of 170 despite being 87/5 at one stage. Rashid's innings snatched victory out of the hands of CSK, who would've felt secured of reaching home for the better part of that chase.

WATCH: Ambati Rayudu livid with himself after being caught out by '3D' Vijay Shankar

But while Rashid's whole innings was great, it was his assault against Jordan in the 18th over that would remain the lasting memory of it. The batter hammered Jordan for a flurry of boundaries in his own unique style.

Rather than trying to belt the ball with brute force, Rashid tried to time it via some exceptional flashes off his willow. He played a couple of tremendous helicopter shots through the on-side. But the best of the lot was his slash wide outside the off-stump for a rare maximum through the cover region.

Jordan didn't help his case by missing the mark on each of his attempted yorkers. But it would be unfair on Rashid Khan to ignore the quality he brought to the table for each of his strokes. It was an innings that should unlock his batting potential in IPL cricket for time to come.