Shimron Hetmyer made weird sounds in frustration at a miss hit in the end-overs.
By Kashish Chadha Mon, 18 Apr 2022 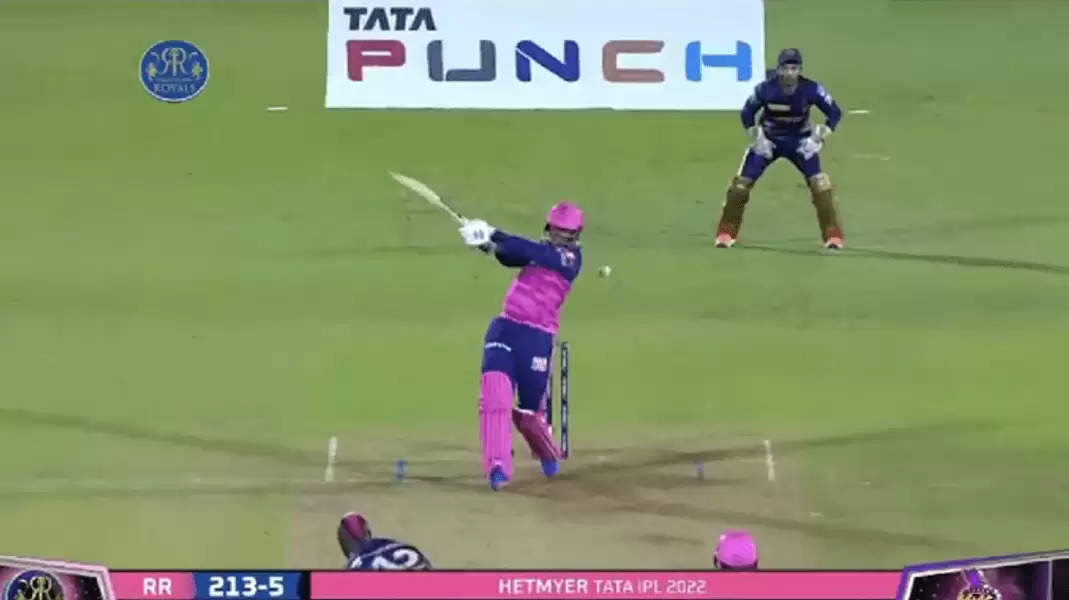 Shimron Hetmyer had his own 'Rishabh Pant' moment on the cricket field.

The West Indies left-hander blasted another fantastic cameo in the end-overs for his side. He blazed his willow for a 13-ball 26 not out in the closing stages of RR's first-innings at the Brabourne Stadium in Mumbai.

The batter hit 2 fours and 2 sixes during his innings to propel RR to a huge score of 217/5 in their 20 overs. Walking into bat at No.4 with the foundation laid for a sizeable score, Shimron Hetmyer went hell for leather and helped RR post a daunting 218-run target for their opposition.

Shimron Hetmyer does a 'Rishabh Pant.

Some of Shimron Hetmyer's rampaging strokes for the night mirrored those of India and Delhi Capitals (DC) explosive hitter Rishabh Pant, a player who went on his journey to stardom at the same time as he did. Both players first caught the limelight at the 2016 edition of the U-19 World Cup in Bangladesh.

Apart from his entertaining batting approach, what Pant is famous for are his amusing antics on the cricket field, including a hilarious tendency to produce funny sounds while batting or keeping behind the stumps. Hetmyer did something unerringly similar while batting against the KKR.

WATCH: Jos Buttler runs all four despite missing out on a boundary in RR-KKR game

The batter made a loud shout in anger at himself for missing his attempted hit through the on-side in the end-overs. Facing KKR allrounder Andre Russell's short-pitched ball in the 20th over, Hetmyer went for a big swing to the mid-wicket region, only to miss the ball completely and see a scoring opportunity end as a dot-ball.

This made him angry and brought out an interesting reaction from the batter, as he shouted "no!! no!!!!" in the air for his missed hit while jumping on the turf in frustration.

Those watching were left with a wry smile at Shimron Hetmyer's reaction. Even the commentators couldn't help but laugh in the moment, with fellow Caribbean resident and former pacer Ian Bishop saying the viewers can be sure it wasn't him making those awkward sounds.