Yuzvendra Chahal was consoled by Suryakumar Yadav after the bowler wore a frustrated look over an LBW decision on the field.
By Kashish Chadha Sat, 30 Apr 2022 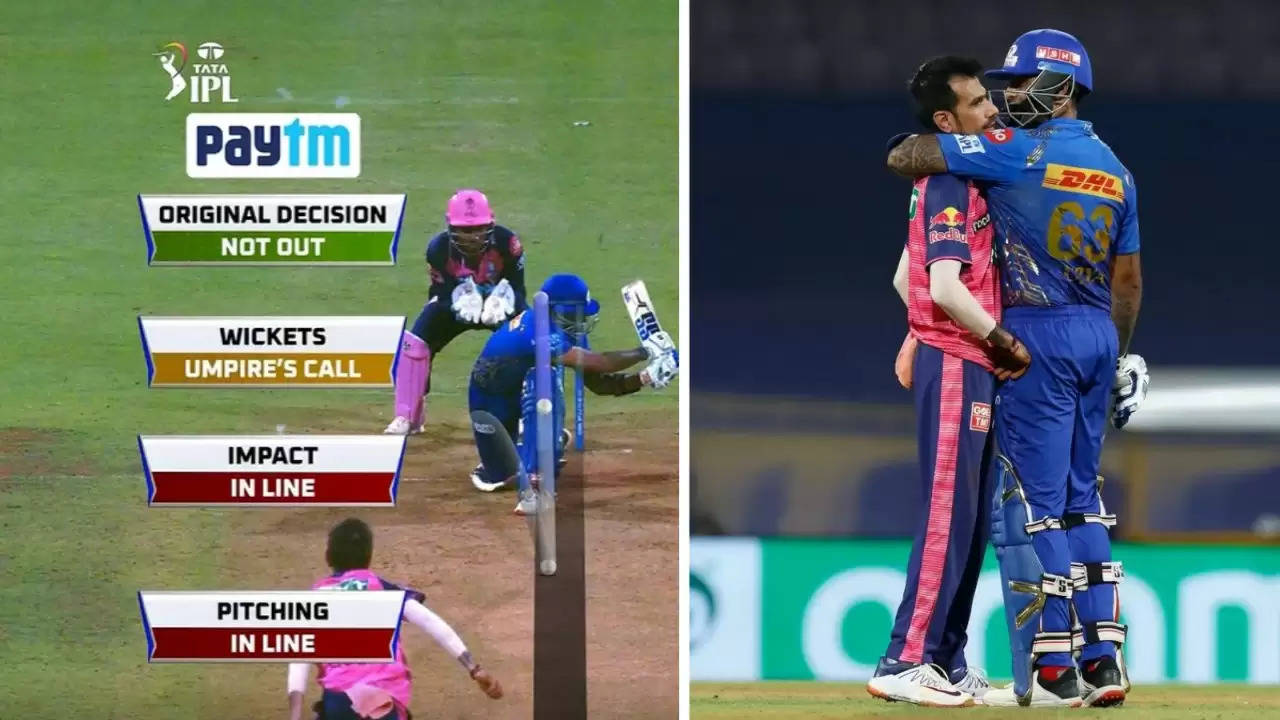 Yuzvendra Chahal was left annoyed after the DRS upheld a not out LBW call made on the field in favour of Suryakumar Yadav.

Rajasthan Royals (RR) wristspinner Yuzvendra Chahal was left bitterly disappointed after a DRS review upheld a not out call made on the field against him in an IPL 2022 league-stage game versusv his former franchise Mumbai Indians (MI).

Chahal was dismayed as umpire Yeshwant Barde didn't budge to his LBW appeal despite MI's in-form player Suryakumar Yadav getting hit plumb in front of the three sticks on an attempted sweep shot. The right-hander missed the ball and it hit him on the knee role to trigger a massive appeal from the bowler.

The umpire, however, was not convinced at all and gave the decision against RR's wishes, to which Yuzvendra Chahal responded by asking skipper Sanju Samson to go for the review. The spinner believed he had his man.

Yuzvendra Chahal angry after 'umpire's call' deny him a wicket

The DRS intervention for the LBW appeal was seen on the final delivery of the 8th over in MI's run-chase at the DY Patil Stadium in Mumbai. Facing Yuzvendra Chahal's straighter one, Suryakumar unleashed his favourite sweep shot but ended up missing the delivery.

The ball crashed onto the front pad and led to a loud LBW appeal from Chahal, Samson and the entire RR fielding unit. But the umpire stood there unmoved, forcing the Royals to opt for the review.

Watch: Virat Kohli remonstrates with umpires after no ball called for keeper having his gloves ahead of the stumps

The technology, though, upheld the 'umpire's call', finding insufficient contact for the ball on the three sticks. The projected path had Chahal's ball turning a bit too much for at least 50% contact with the off-stump.

With that being the case, the television official asked umpire Barde to stick to his original decision and let Suryakumar continue his innings.

Not for the first time, the umpires' call on the projected path was disapproved by a bowler, as even the usually calm and amusing personality in Yuzvendra Chahal was seen wearing an angry look.

Moments after the final decision was made, Suryakumar went up to Chahal and consoled the visibly frustrated bowler with an arm around his shoulders. But Chahal was so disgusted at the decision that he stood there unmoved while the batter and his India teammate hugged him fondly.

It was clear that Yuzvendra Chahal was desperately eyeing Suryakumar's wicket at that stage of the game. Trying to help his team defend their low-key score of 158/6, Chahal almost reduced MI to 66/3 at the end of the eighth over.