Watch: Virat Kohli remonstrates with umpires after no ball called for keeper having his gloves ahead of the stumps

Umpire Virender Sharma reverted his original decision and made a no-ball call, which brought a reaction out of Virat Kohli.
By Kashish Chadha Sat, 30 Apr 2022 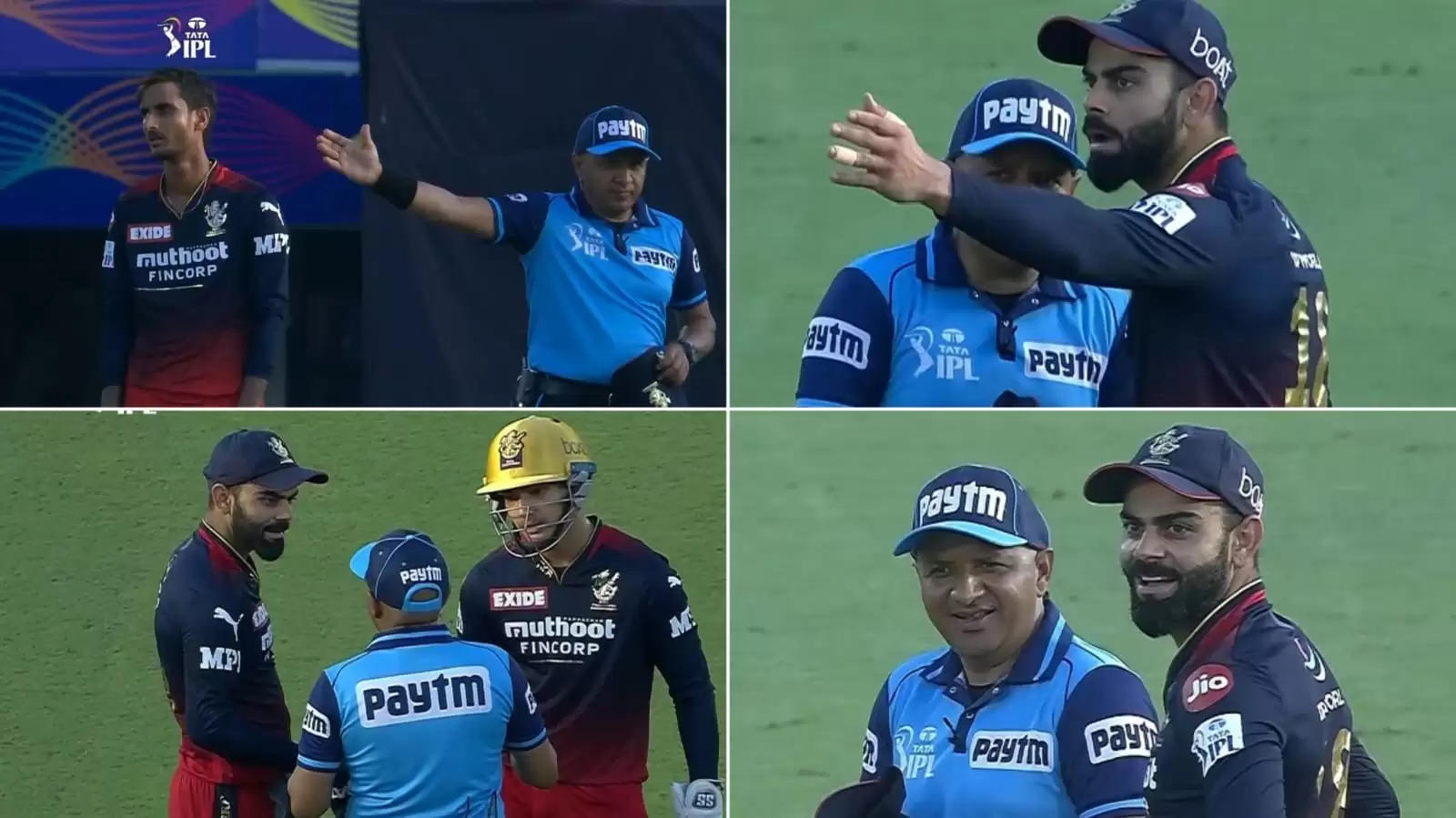 Virat Kohli was left bemused by Sharma's call, as the standing official called out RCB keeper Anuj Rawat for misplacing his gloves.

A bemused Virat Kohli was left having an animated discussion with standing umpire Virender Sharma after a rare no-ball call in an IPL 2022 league-stage encounter on Saturday (April 30).

The Royal Challengers Bangalore (RCB) great felt puzzled why Virender had signalled a no-ball after Gujarat Titans (GT) batter Shubman Gill got reprieved on a caught behind DRS intervention.

Moments after Gill was saved by the review that forced Sharma to reverse his original call, the umpire made another decision, declaring it a no-ball for keeper Anuj Rawat placing his gloves ahead of the three sticks while going for the catch.

This triggered a reaction out of Virat Kohli, who was seen unleashing a displeased smile at Sharma for having made a secondary call when RCB had just been denied a wicket on the DRS.

The incident is from the back half of the ninth over in Titans' run-chase. Facing a delivery wide outside off-stump from spinner Shahbaz Ahmed, Gill shaped up to play a cut short, only to miss the ball and trigger a caught behind appeal from Rawat, Shahbaz and the rest of the RCB fielding unit.

Convinced by their loud shout, standing umpire Sharma raised his finger, finding the ball peerlessly close to Gill's outside edge. But the decision was overturned on a DRS review taken by Gill, who had instantly called for the technological intervention.

Soon, Sharma apologised for his original call and let Gill resume his innings. But in rare scenes, the standing official also made a no-ball call moments later, finding on the giant screen that Rawat had gotten his keeping gloves ahead of the stumps while approaching the ball.

This made Virat Kohli a little angry, as he was seen having an animated discussion with Sharma and his fellow umpire Saiyed Khalid while they tried to inform the legend why they have arrived at their latest no-ball call.

As per the game's laws, the keeper can't have his gloves placed infront of the stumps while making a caught or a stumping attempt against the batter.

To rub salt into RCB's wounds, the next ball was a free-hit, which Gill dispatched for a huge six.