The ploy has beefed up the pacer's wickets tally but left him on slippery ground with his run-stoppage capabilities.
By Kashish Chadha Wed, 21 Sep 2022 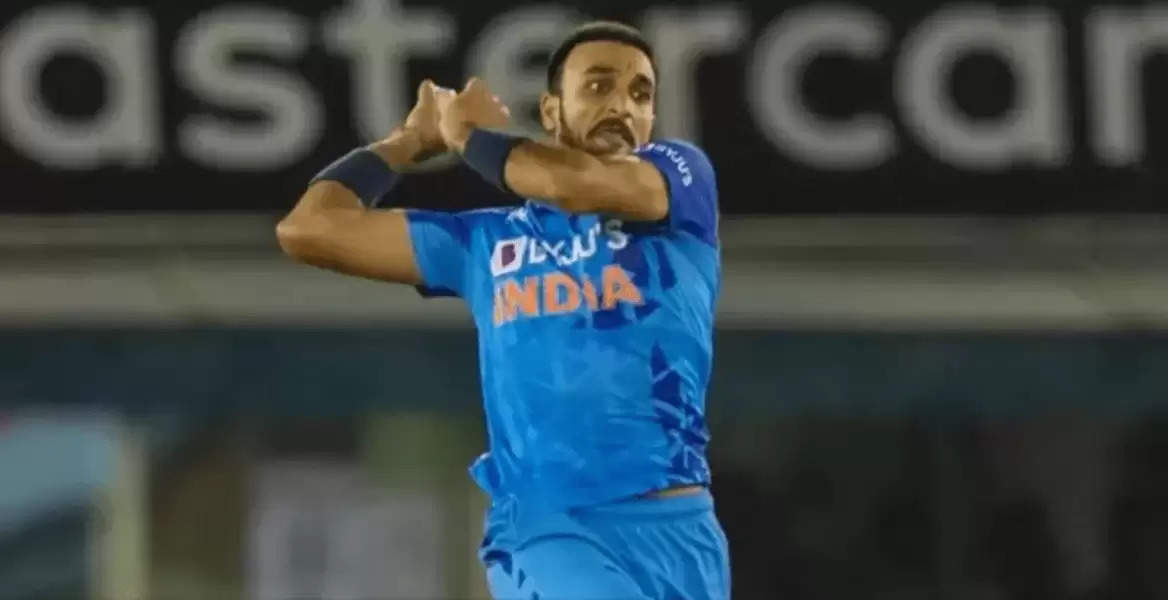 An expensive outing against Australia in Mohali was the fifth instance of Harshal Patel going for more than 10 an over in T20Is for India.

During an interview on famous YouTube show, 'Breakfast with Champions' with Gaurav Kapur, Harshal Patel revealed he managed to outfox Glenn Maxwell and Virat Kohli with his slow off-cutters and dippers during a net session for Royal Challengers Bangalore (RCB) in the IPL.

"How do you play that?", one of them told him in awe and praise, inspiring a deeper sense of trust in the Haryana seamer about his abilities and the ploy he has been wholeheartedly backing since his return to RCB colours in 2021.

Harshal derived from that interaction if he could beat two of the world's biggest names with his mix of slower balls that dip at the last minute to evade the downswing and nullify optimum connection, he can replicate the ploy with success against anyone.

A studious personality and deep thinker of the game and life, Harshal, who got traded to RCB from Delhi, wanted to turn a corner for himself in the IPL, where lack of opportunities were threatening to shatter his career. Returning to RCB, the bowler recognised his limitations with pace and focused on moulding himself into a different prospect for the opposition.

Harshal didn't have the bounce to push the batters back at hard lengths or the speed to beat them with pinpoint yorkers. Limitations compelled the pacer to sharpen his slower balls, which dip in the air, not so much grip off the deck, to force batters to find the catching men in the deep, not the boundaries. The nod of approval from Maxwell and Kohli only reinforced belief within the bowler on his newly developed method.

That, combined with Kohli, the then RCB skipper, giving Harshal a designated death-overs specialist's role, propelled the seamer to continue the ploy throughout IPL 2021. What followed was an unprecedented 32 wickets in the season, with the right-arm quick playing his role in his team's acsent to the playoffs.

Since his return to RCB colours, no one in the IPL has taken more wickets than the seamer's 51 scalps over 30 innings. Harshal's IPL exploits with RCB in 2021 also earned him an India cap in November. The 31-year-old has featured in 18 T20Is for the country since then, bagging 23 wickets.

The transformation from a normal seam-up bowler with occasional use of slower balls to a predominantly slower-ball operator in the end-overs phase has proliferated Harshal Patel's wickets column. But there is something to be said about this shift: it hasn't prevailed without a compromise on the bowler's run-stopping capabilities. While he remains a flourishing wicket-taker for RCB and India, Patel is not as safe a bet anymore when it boils down to maintaining a leash on run-scoring.

Numbers vindicate this: no Indian seamer bar Avesh Khan (9.10) has been more expensive since his debut against New Zealand, with an economy rate of 8.82. Of his career tally of 361 deliveries, 22.1 overs have been bowled at the death in T20Is. Harshal has gone for 11.50 an over in these, conceding 22 sixes to the opposition. The mauling at the hands of the Australians in Mohali where he went for 0/49 off his 4-over quota, was the fifth instance in Harshal's young T20I career where he recorded an economy rate above 10. Three of these outings have been against West Indies, Sri Lanka and Ireland, among the weakest contemporary batting units around.

Irregular game time, with these 16 T20Is coming over 11 months, may have plagued Harshal Patel's rhythm and made it difficult for him to execute his plans - the Mohali T20I was his comeback after a four-week side strain rehab. But his economy rate for RCB over two seasons worth of regular game time paints a picture not too different to this.

28 of Harshal's 51 wickets for RCB in his new stint have arrived at the death. But at an economy rate of 9.52 from a very healthy sample size of nearly 45 overs. In IPL 2022, Harshal went for an even more costly 9.58 in the end-overs phase, conceding 15 sixes and 10 fours. In what was hailed as his breakthrough season in 2021, the seamer had a death-overs economy rate of 9.47, with 13 fours and 12 sixes conceded.

From the beginning of last year's IPL, Harshal has an overall tally of 36 maximums conceded off his bowling, only Shardul Thakur (40), Kagiso Rabada (39) and Mohammed Siraj (37) have given more. 16 of those sixes came in IPL 2021, with the bowler getting smashed for 20 maximums in IPL 2022.

Harshal conceded an alarmingly high number of sixes even in his busiest season in the wickets column, with an upsurge into the following campaign for RCB that coincided with a dip in the death-over wickets for him. He bagged 19 scalps in overs 16-20 in IPL 2021 over 14 innings but took only 9 of them in IPL 2022 from 13 innings.

An evident dip in the wickets taken at the death and more sixes conceded from one season to the other was suggestive of opposition batters getting a better hang of Harshal Patel's method, being able to predict his slower dippers to a greater degree than they did in the ploy's infant stage and therefore managing to execute their big hits with more success by getting underneath those deliveries.

The bowler has still persisted with the method deep into India's build-up to the T20 World Cup, partly down to his limitations and partly due to the variation that enables his presence in the Indian scheme of things. That Harshal Patel can give it a tonk with the bat and coach Rahul Dravid loves his No.8s who can bat has also bolstered the cricketer's case.

But the crux of the numbers doesn't reflect a successful ploy. It, in fact, points to a failing death-overs bowler, whose wickets aren't really helping his team attain control and ascendancy over the opposition in a phase of the innings for which he got picked in the first place.

The record attests to how risky the Harshal Patel method always ways: the bowler enters into a one-on-one bout against the batter, with a single-point agenda to evade the downswing with his slow dippers that go peerlessly close to the arc.

Since his line is predominantly straight, the moment Harshal fails to impart enough revs on his slower balls so as to enable that dip, it becomes an ideal fodder to the downswing and he is taken for a six. His success is directly related to the amount of dip he manages to extract on a ball. Fail at it, and he's taken for plenty.

Drift and dip on a slower ball are tougher to counter for the batter when they combine with the grip available from the surface. But most tracks on which T20 is played offer true pace and bounce for the batters to relish, which takes away the last moment of change of direction of the ball against the downswing, making it that much more easier for the player to find the sweet spot on the bat.

Harshal leaves himself extremely vulnerable to the meaty part of the willow by depending largely on the dip he can generate from his bowling arm. Stronger shoulder rotations can help impart that dip, especially if backed with the right amount of revs through the fingers. But if there is no grip and turn available, batters can wait to sight the initial trajectory of the ball and back their bat flow in the direction of the stroke without hesitation.

On dryish pitches in UAE that accentuate the impact of his slow dippers, Harshal has taken 15 wickets at 7.12 an over since his RCB comeback. Take the same bowler to Indian conditions with his ploy on truer, skiddier pitches, he has gone for 8.18 an over, with an end-overs economy rate of 10.14.

There was an evident change in the way the opposition played Harshal Patel from IPL 2021 to 2022 and have countered the Indian seamer in T20Is since his debut series. Maximise his stock ball, force him to come up with more pace to push them back, and then continue exercising their dominance against him.

Heading into an Australian World Cup, where grip from the surface will be sporadic and minimal, if at all present, Harshal Patel needs a wider array of skills to attain wood over rampaging batters. How he manages to do that without overcoming his pace limitations is wherein lies the bowler's fate beyond that tournament in India colours. For now, it couldn't be more clear: the Harshal Patel method isn't working.