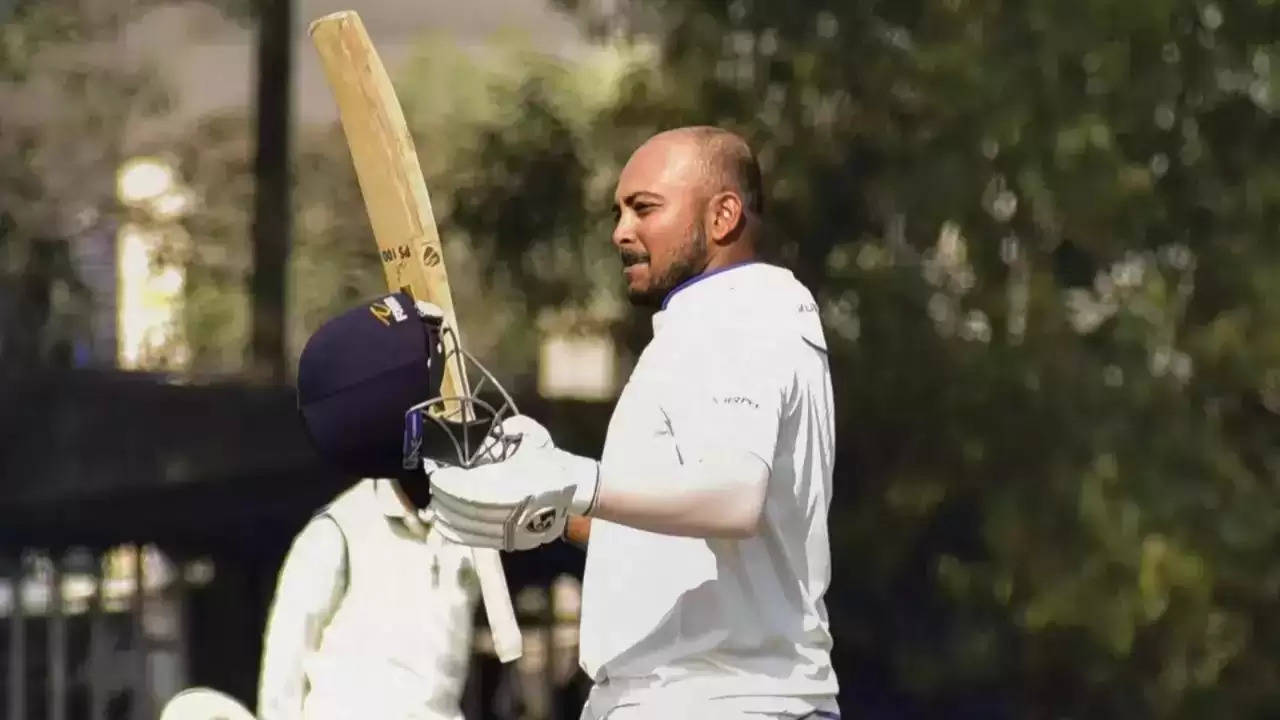 Prithvi Shaw is hogging the limelight for an incredible maiden triple century in the Ranji Trophy. The aggressive Mumbai opener recorded a jaw-dropping knock of 379 in the fourth round Ranji Trophy 2022-23 fixture against Assam. Prithvi Shaw produced his maiden triple hundred off 382 deliveries.

The India and Mumbai maverick imposed himself on the game and played arguably his best knock in domestic first-class scene, hitting a whopping 49 fours and 4 sixes in a great innings where he retained a belligerent strike rate of 98.96.

Shaw hammered an inexperienced Assam bowling attack to all parts of the scenic Amingaon Cricket Ground in Guwahati, threatening to send the ball into the lake outside the small venue. Mumbai wouldn't have mind the youngster's knock either way, as the 23-year-old etched himself in the record books with the second-highest individual score ever achieved in Ranji Trophy history.

Only six players have recorded 350 or more runs in a single innings of a Ranji Trophy match and Shaw is now placed second in the elite list with his memorable knock of 379. Here are other entrants part of the coveted list and a few details around their equally great feat in India's premier domestic first-class competition.

The Ranji Trophy is now over 90 years old but the massive record achieved by Mumbai's BB Nimbalkar has withstood the test of time and eras. No player has ever managed to cross the individual record set by Nimbalkar of scoring an insurmountable 443 not out during the 1948/49 Ranji Trophy season. It's the only time a player has managed to record a quadruple century in Indian first-class cricket and is the highest score by an Indian not to have played Test cricket.

Notably, the player Prithvi Shaw just leapfrogged in the list of fellow Mumbaikar Sanjay Manjrekar, who is now third in the list of top run-getters in Ranji Trophy for his exceptional knock of 377 made against Hyderabad. Playing for what was then 'Bombay', Manjrekar got the Hyderabadi attack chasing the leather for a marathon knock during the 1990-91 season, when he was emerging at the Test level as a prominent figure in Indian batting regime alongside young Sachin Tendulkar.

Former Hyderabad player MV Sridhar is fourth in the list of highest scorers in the Ranji Trophy history. Sridhar produced his best feat in first-class cricket with a knock of 366 during the 1993-94 season against Andhra, denting the spirits of the Southern rivals with a long haul in the middle. Back then, Sridhar's 366 came in the highest team total achieved in Indian first-class scene as Hyderabad declared for a shocking 944/6. Despite his feat and averaging nearly 49 at the first-class level, however, Sridhar never played Test cricket for India.

The next highest score in Ranji Trophy is a joint record achieved by the great Vijay Merchant and Samit Gohel. They've both produced a knock of 359 not out in the premier first-class competition. While Merchant reached the mark way back during the 1943-44 season for 'Bombay' against Maharashtra, modern-day batter Gohel produced his gem in the 2016/17 season for Gujarat against Odisha. They both hold the tag of the fifth-highest individual run-maker in Ranji history.