How Jos Buttler Switches Between Clark Kent and Superman

Using the deep stance, Buttler strikes at 253. With other stances, the number is 117. We combine footage and ball-tracking data to tell the tale of a transformation.
By Harigovind S Sat, 17 Sep 2022 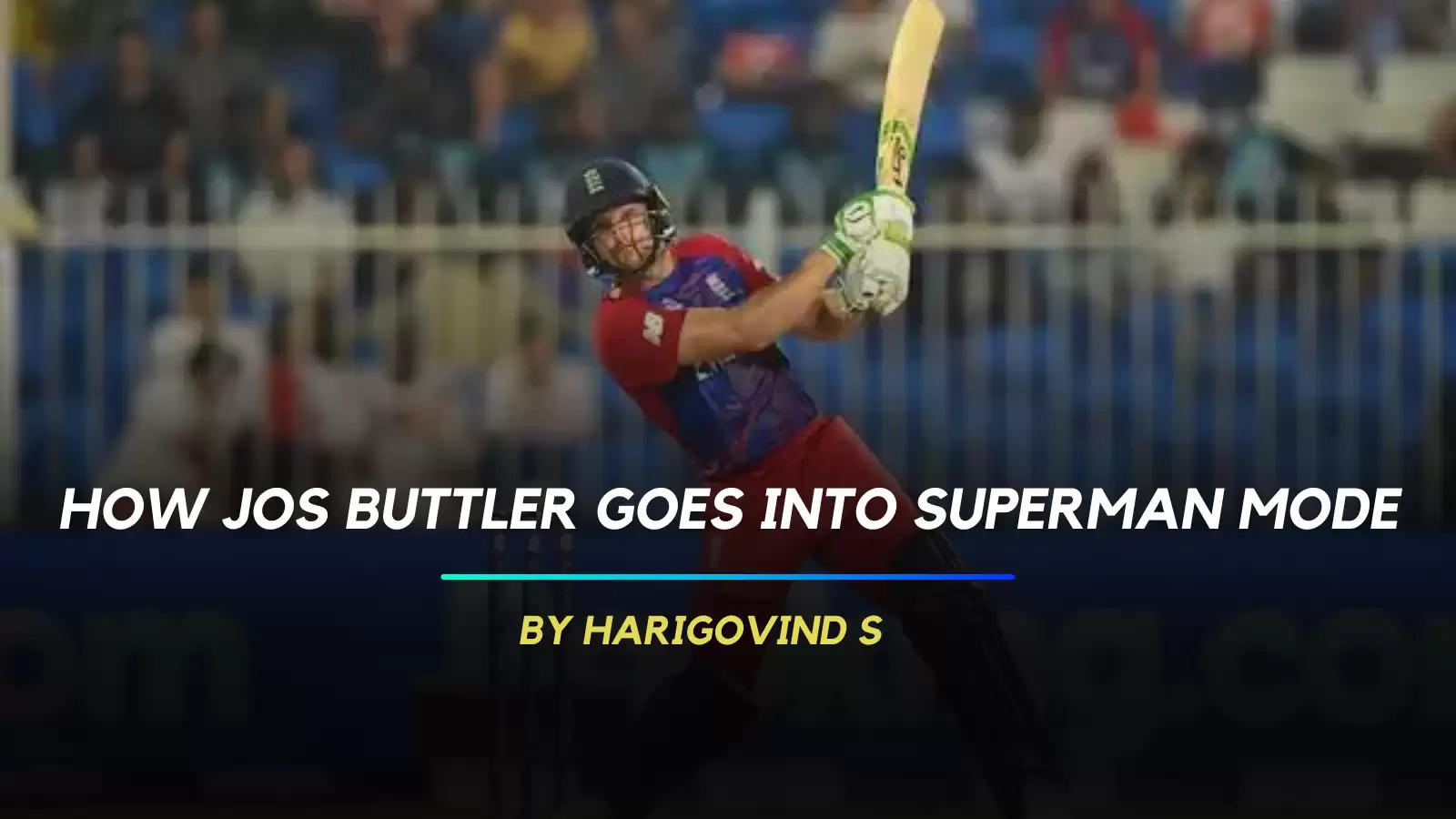 It is routine to see fighters gesturing their competitors to go for it with a nonchalant wave of the hands aimed at themselves. In cricket, Jos Buttler does the elaborate version of that.

The fifth set of the Manchester Originals’ first innings in the 16th match of The Hundred beckons. David Payne is sprinting in. Jos Buttler is on strike. As the bowler nears his stride, the air around the wicket is set in motion. It is Buttler; his torso opening up like a door left half open being buffeted around by air, his feet diving deep into the depths of the crease like an immigrant crossing borders. The hands slash forcefully, gushing through the pathway generated by the diversion caused by the front leg. It is a joint hit, a two-man operation. The result is a boundary over deep midwicket.

Trigger movements are commonplace, but this is something altogether new.

It is not unheard of for T20 cricketers to use distinct set-ups for the distinct purposes that are hitting and batting – consider Dinesh Karthik and Virat Kohli, for example. But Buttler is separated from the mortals by the distinct success and extravagant repeatability of this action. There is evidence which stretches back till at least as early as the 2022 IPL which documents Buttler’s usage of this “deep stance”, each more comprehensive than the other. Such documentation is, however, constrained by the lack of usage of objective data to complement the subjective observation of the analyst, in a way which allows confirmation of the claim made by the non-analyst and a deeper discovery of clinical truths; such as the fact that Buttler uses this hitting set-up to approximately a fourth of the deliveries he faces from pacers, as we shall presently see.

Such an analysis is precisely what footage data from the previous IPL will allow us to do, but we must first confront the problem of defining this deep stance of ours. Spread over a large sample space of 416 balls, Buttler may have used a number of set-ups against pace in the 2022 IPL, but we remain interested only in this particular set-up where he springs deep into the crease, clears his front leg, clutches the bat far from the body, and crouches like a wild beast preparing to attack. These four biomechanical variables were then used as the pointers to the deep stance; any set-up which ticked these boxes was identified as Buttler’s hitting stance.

The data which emerged out of this exercise of manually tagging the footage by set-up reveals fascinating details about the method to the madness of Buttler, and also cricket in general.

The below chart summarizes the incidence of the five most prominent set-ups in Buttler’s arsenal. As hinted before, two iterations alone comprise the bulk – the regular stance and the attacking set-up, making up over 76% of all the set-ups used in the IPL. But there are notable exceptions too. Especially interesting is the fifth on the list – no trigger, no crouch, no wide backlift, no clearing of the front leg. Of the 17 times that this set-up was seen in the record, 15 resulted in a scoop shot. Every once a scoop is played it is preceded by this combination, and almost each time this combination is used it is followed by a scoop. So if you are a bowler running in at Jos and he refuses to initiate his trigger movement before you commence your back-foot contact phase, be assured that a scoop may be heading your way. 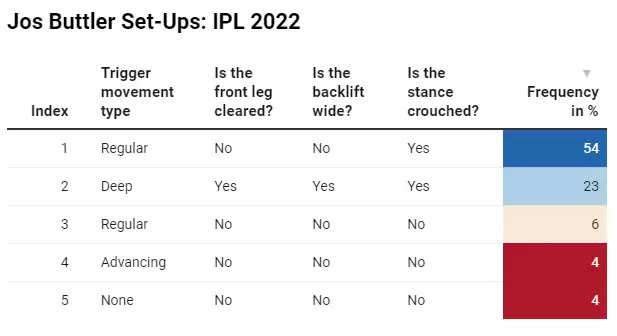 To our ends, however, the devil lies in the details of the top 76%. The deep stance is a combine of brain and brawn; a tailored optimization of hitting efficiency by frisking the front foot out of the way. The regular stance, on the other hand, is not too different from the Test match set-up: consistent triggering, hands positioned close to the body, and a closed stance make up its merit. The expectation, naturally, would be that the former supports brute hitting, while the latter supports serene batting.

This is borne out elegantly through the data. We first see that the deep stance returns an “attacking strike-rate” (strike-rate achieved when playing an attacking shot) of 253.19, while this figure reads 117.39 for all other set-ups. This, when combined with the fact that he attacks more than 90% of the balls faced with the hitting set-up and only 58% of the balls faced with the batting set-ups, helps us understand why the deep stance greeted only a fourth of the balls Buttler faced in the IPL but made almost half the runs.

It is still possible, that this higher attacking efficiency of the deep stance is a product of playing naturally higher-scoring attacking shots while using it, such as a slog or a hit as opposed to a cut or a drive, rather than an effect intrinsically attributable to the set-up itself.

To an extent, this is true. The below plot gives the attacking rates and attacking efficiencies of both the set-ups, separated by shot. Buttler plays more slogs and hits with the deep stance, traditionally faster-scoring shots, than he ever does with the regular set-up. At the same time, what is also true is that these slogs and hits fetch him faster runs while using the deep stance than they do usually, while the more orthodox shots – the flicks, the drives and pulls – generate runs at a slower clip. At the heart of the synergy between attacking set-up and the batting stance is a classic trade-off: the compromise of batting efficiency in favour of hitting efficiency. In other words, it is not the case that a change in set-up spawns a changed Buttler; the hitting set-up simply favours a certain brand of cricket more.

We know now that the deep stance is not necessarily better than the regular stance on all counts, it merely performs certain functions better. Given this, what appears to be most important to its successful usage would be optimal situation deployment; that is, using the deep stance when it best be used. So, when does – and when must – Buttler unveil the deep stance?

It is tautological to say at this point that the intention of the attacking set-up is to enforce, but it must be said so. Of course, this is sufficiently reflected by the fact that Buttler attacks more than 1.5 times the deliveries he attacks with the other set-ups, but what makes this claim invulnerable to speculation is that all four of the times he was faced with a free-hit in the 2022 IPL Buttler hauled out the deep stance. The free-hit is a delivery which any semi-rational, self-interested cricketer aims to attack. There is no reason to defend, since the risk posed by the free-hit is zero. To attack is the pareto-optimal strategy, a take-it-or-take-it offer. If we assume that Buttler is a rational cricketer, it follows that his intent to the free-hit is to attack. It is easy to see then that the job of the deep stance is to attempt a hard blow.

This gives us a hint as to where this high-intent set-up may best be used: when the need of the hour is fast runs. Unfortunately, the data does not take us any closer to understanding when it gets used because its phase-by-phase application is quite random. There is one thing, however, which stands out.

What this means is that there is perhaps merit for the fast bowler in assuming that every successive ball following one to which the deep stance has been used will also be met with the same deep stance, and bowling a ball type that minimizes the damage wrecked by this set-up. This sort of premeditation is sometimes necessary: for most bowlers, the time between the batter’s trigger movement and ball release is hardly enough to change the intended ball type, especially for the fast men, who face more dynamic mechanics through their stride than spinners.

This further raises the question: which ball type best minimizes the damage caused by the deep stance?

Questions of this type are exactly what ball-tracking data will help us answer. Matching the ball-by-ball database generated through manual tagging with such data reveals that neither line nor change of pace has an effect on the attacking efficiency of the deep stance. Both stock balls and slower balls (cutters included) are pummelled at a strike-rate of approximately 250, and all the six line labels – down leg, leg, middle, off, outside off and wide outside off – are hit at about the same rate.

The clincher, however, is length. The traditional “good” length is not good enough to Buttler. Anything that pitches between 6 and 8 metres of the wickets is sent cartwheeling to the boundary at a strike-rate of 290.9. On the other hand, anything that lies in the “attempted yorker” region – full tosses, yorkers and half-volleys – is swatted at a comparatively low rate of 170.0. The advantage might be especially pertinent if you attempt a yorker and err on the fuller side. Only 26 runs were made off 16 full tosses faced with the deep stance, a manifestation perhaps of a deeper technical tantrum. The data, then, is unambiguous: there is a reasonable probability that a bowler may be able to withstand the vicissitudes of Buttler if they act upon the presumption that every ball following the initial deployment of the attacking stance will see Buttler leap deep into his crease. Especially if you are one to attempt a yorker and lob it fuller. That is to say, someone who puts a great deal of lift on their yorker. Nudge, nudge, wink, wink; Archer, Shami or Bumrah.

For way too long in cricket, it has been supposed by a certain section of fans that set-ups are inconsequential to performance, at least at elite levels. The perfect coincidence between expectation formed from theory and reality founded by data seen in this article constitutes far from an outright repudiation of that, but it does solidify the claim that these set-ups matter much to certain cricketers, even at international levels, even over prolonged sample spaces.

An analysis of the broader truth value of this claim will take a longitudinal mapping of changes in technique in global cricketers over a lengthy period of time, a task which is outside the scope of cricket analysis in its current form. Until then, Jos Buttler will keep gesturing bowlers all over the world to come at him, with no less gusto than a fighter. Few things can keep him at bay. This article might help.