Combining technique with numbers to tell the story of a death-overs phenomenon - Dinesh Karthik.
By Harigovind S Fri, 29 Jul 2022 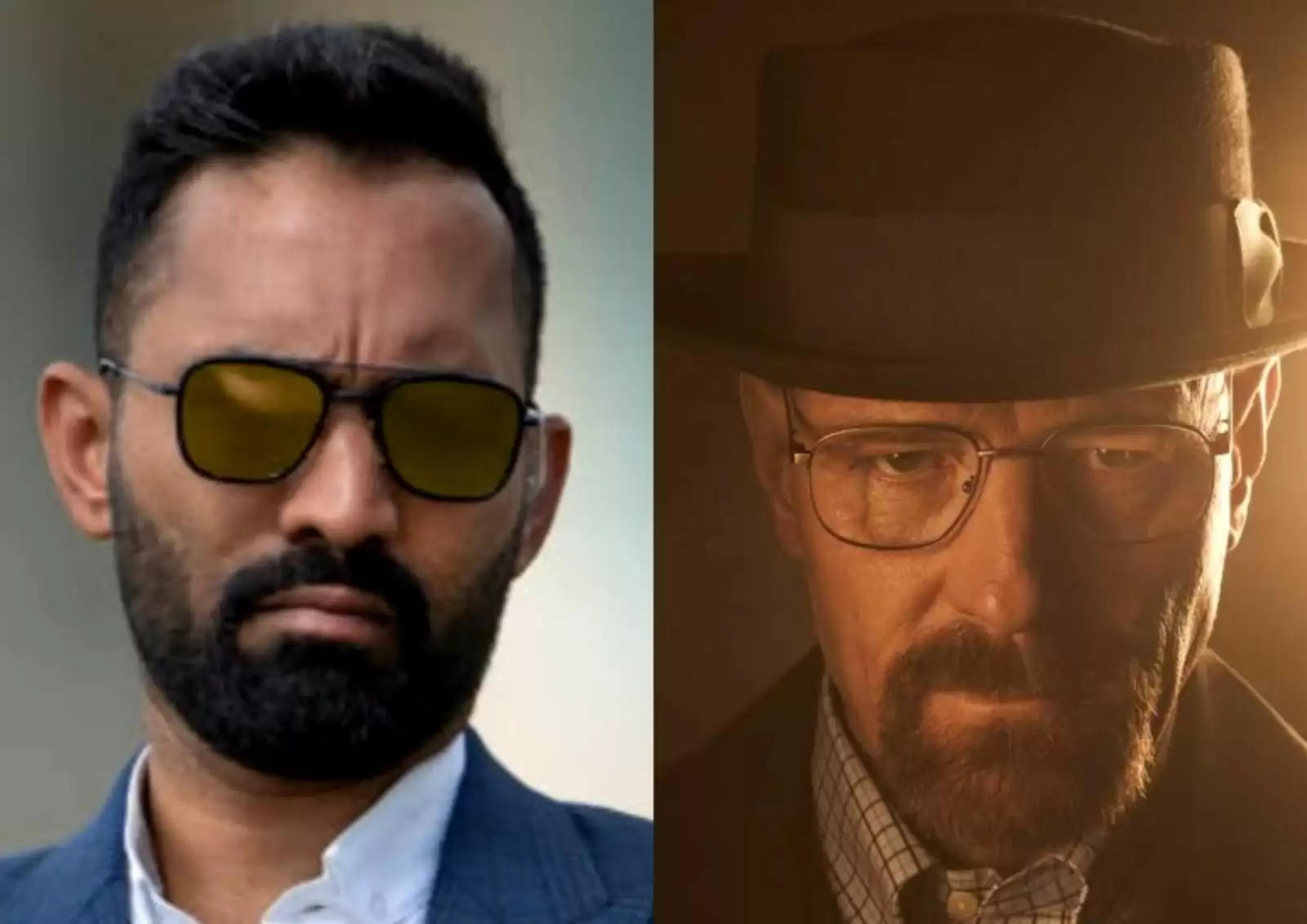 Dinesh Karthik was 35 years old when he was diagnosed with spin cancer. Before 2020, Karthik averaged 34 runs per wicket at a strike-rate of 126 against all kinds of spin in T20 cricket. Since the diagnosis, it fell to 18.6 and 120 respectively. Karthik had spent the majority of his life serving probation under a wicket-keeper batter junior to him and performing one of the greatest support acts in the history of Indian List-A cricket. Yet, bad things kept happening to him. So, Dinesh Karthik decided to break bad.

Ball-by-ball footage is available for each of Karthik’s sixteen innings in the 2022 IPL. Bulldozing through this footage armed with a keen eye and a statistical definition of cricket’s “attacking shots”, it is more than possible to unearth the components of the technical transformation that outlined Karthik’s upheaval.

The caveats here are few. There is the eternal problem of sample sizes, which may still be bypassed through caution. The bigger barrier is the conflict of manual tagging: to mentally estimate whether a player has an open or closed stance, as opposed to leaving the job to a machine, puts the analyst at a position of authority which does not bode well towards minimizing the subjectivity of analysis. Doing so is still our best shot, given that searching for biomechanical data for international cricket matches is nothing more than a snipe hunt. Here, then, is the story of how Dinesh Karthik went from middle-overs-marauder Mr Chips to end-overs-horsewhipper Scarface.

In the 171 balls recorded in the database (95% of the total sample) so formed through post-facto footage investigation, Karthik used two set-ups against spin and pace each. These set-ups - three in total - we shall imaginatively call the bat-tap set-up, the crouched stance, and the wide backlift. Their meanings are self-explanatory: the bat-tap sees Karthik tap his bat on the pitch; the crouched stance is bending low to the wicket, hands transfixed; and the wide backlift entails gripping the bat far away from the body with the top hand absorbed in motion.

The clincher is their differentiated usage. Of the 33 balls recorded in the database to which the crouched stance was used, 31 came against spinners. And each of the 55 documented balls faced using the wide backlift came against fast bowlers. The bat tap, on the other hand, was used identically against both spinners and pacers. Given such utility differentiation, it becomes all the more important to scrutinize the set-ups in relation to the situations they were used in.

So, scrutinize we shall. Karthik’s batting against spin consists of two preparative mechanisms: the bat-tap set-up and the crouched stance.

The bat tap’s usage is two-fanged – to get set, and to (reverse) sweep spinners. Of the 34 times that this set-up was used to spin, 35% resulted in conventional or reverse sweeps. In the second half of the season, this rate climbed to 57%. Put mildly, that is abnormal. According to Nathan Leamon and Ben Jones’ “Hitting Against the Spin”, the global average for sweep frequency in Tests is closer to 4%. Karthik, on the other hand, is not only sweeping a third of his deliveries, but also leaving some indication that his sweep is reserved for legspinners. Leggies faced the wrath of his sweep almost once every two balls, while fingerspinners were treated to the sweep 3 times out of 32 balls. 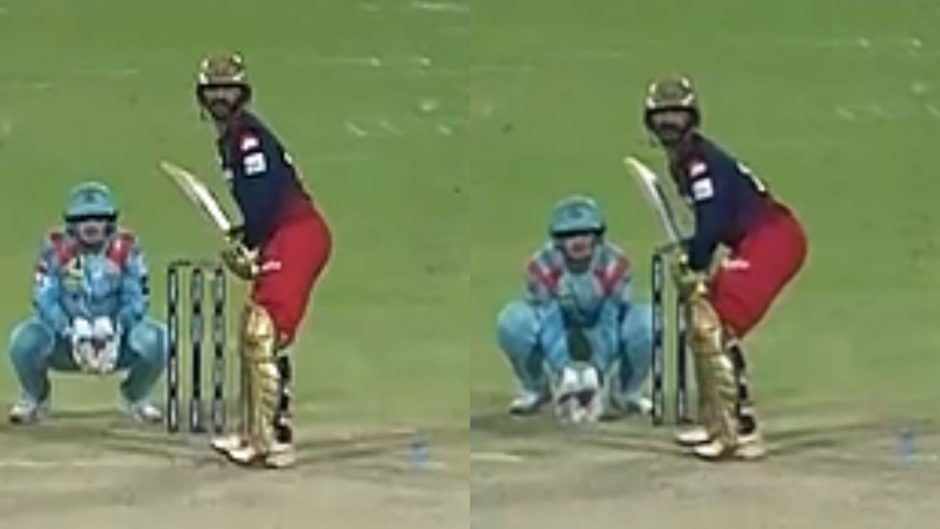 Setting up vs spinners: bat-rap (L) and the crouched stance (R). Tapping the bat enables Karthik to get his hands lower, while also enabling a loose top hand.

And with some sense. Leggies bowl the googly, offspinners don’t. And Karthik’s primary malaise against spin in the last few years has come through the googly. Horizontal-bat shots to play lateral deviation when you can’t predict the direction of turn is an age-old trick of batting.

This, then, is how it all comes together. Karthik taps the bat when he premeditates to sweep. When he gets a length that is suitable for the sweep, he goes for it. Otherwise, he reins it in. What does the bat tap add to this choice? The answer lies in one key predictor of hitting success: the extension of the lead elbow. The straightening of the top hand at the point of bat-ball contact predicts somewhere between 28% and 77% of hitting success in cricket, and the sweep is an attacking shot. The bat tap favours the extension of the lead elbow by loosening up the top hand in the instant before release.

Not surprisingly, then, there is some very slight evidence that the sweep may be used in greater concentrations against googly bowlers. To Rashid Khan and Ravi Bishnoi, spinners who employ the googly 39% and 44% of the time against right-handers, Karthik got on his knees 4 times out of 8 opportunities. In comparison, only 3 out of the 31 times the crouched stance was deployed against spin was a sweep on show. Small sample sizes, yes, but make of that what you will.

What, then, is the crouched stance good for? One possibility is that it is being used to aid movement around the crease. If we define pre-determined movement around the wicket as retrenchments across or away from the offstump greater in measure than the regular trigger movement, such motion was recorded 32% of the times while the crouched stance was in use. The bat tap, unsurprisingly, did not associate a single delivery with such anomalous movement. Shrinking his stature by a touch perhaps makes it easier to make swift sideways steps.

Another piece of situational deployment that fascinates is as follows. Legspinners are being showed the crouched stance almost twice as often as fingerspinners. It is a clever ploy given that the bat tap encourages a more aggressive brand of cricket with its flexible top-hand marshalling unabated striking. The results are there to see. 70% of the balls faced with the bat tap were “attacked”, but with the crouched stance only 45% were shown the meaty part of the bat. Attacking efficiency too differs. The crouched stance recorded an attacking strike-rate of 92 but for the bat-tap it scaled up to 186. Partly because the bat tap’s inherent bellicose effects and partly because he uses it against fingerspin, Karthik attacks like a wild boar.

Karthik’s spin blueprint, then, is two-pronged: the bat tap used against fingerspin, and the crouched stance used to wristspin. But the few times when the bat tap produces itself against wristspin, a sweep is perhaps coming: seven out of the eight times it was used against legspin a sweep manifested. Taken together, what this means is that if you are a legspinner and you see Karthik plonking down his bat as you commence your stride, there may be merit in banging one into the pitch or darting it wide. The unfettered lead arm is there to sweep.

The effect is that Karthik’s spin average is up from 18.6 in the last two years to 42.5. He is not particularly striking them harder, but he is surviving those stages which used to pound him like Apollo Creed pouncing on Balboa before Rocky decides to fight with the left hand. The cancer is in remission.

But to break bad is to terrorize, and thus far alone is not enough for Mr Chips to mutate into Scarface. So the end of the innings neared, and Karthik’s pace strike-rate elevated itself from 132 in the preceding years to 183 this year. How did that happen?

Karthik’s method versus pace consists majorly of two set-ups: the bat tap and the wide backlift. The bat tap, as usual, is of two uses – to get set and to play sweep or scoop shots. Of the 49 times that the bat tap was recorded against pace, 10 resulted in a sweep or scoop of some type. In fact, if we limit ourselves to the times where the bat tap has been reintroduced after a certain stage of the innings wide backlift has been used at least once - which shall be discussed soon - every such occurrence has resulted in either a sweep or a scoop shot. The formula is precise: get set, and if set, rollick. 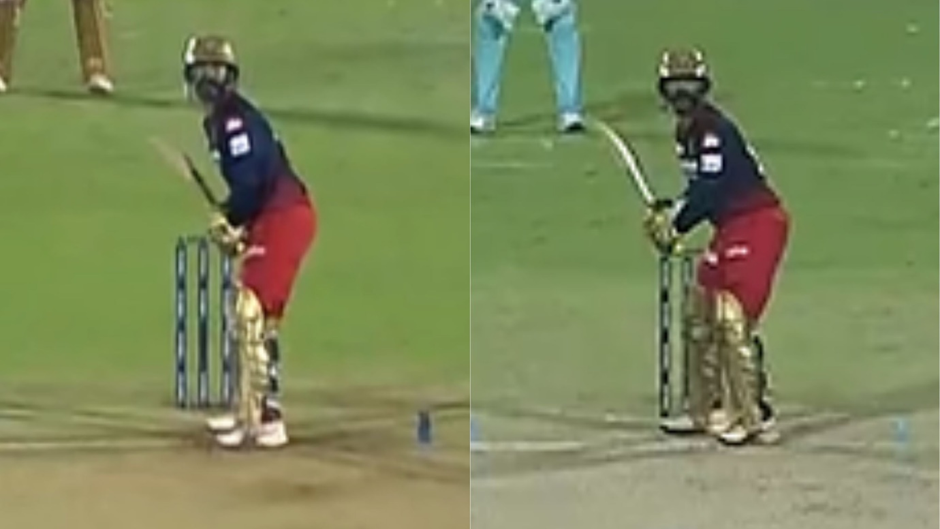 Setting up vs pacers: bat-tap (L) and the wide backlift (R). The wide backlift with the hand bob is a great way to combine the best of both worlds - the bat-up and bat-down methods - and is used by many modern cricketers.

While against spinners the complement to the bat tap was the crouched stance without the hand bob, against pace it is the wide backlift – combined with a constant bobbing of the arms as the bowler runs in. The purpose of this hand bob is intuitively comprehensible. With the bat tap gone, the hitter needs a separate way to maintain a loose top hand pre-release in order to facilitate the extension of the lead elbow. Bobbing the arms is one way of combining it with the advantages posed by the high backlift to the hitter.

And this is when Karthik truly morphs into a hitter. 51 out of the 55 balls (93%) faced with this set-up were attacked, and only 4 of those came through scoops and sweeps. In comparison, only 32 of the 49 balls (65%) greeted with the bat tap were attacked, a clear indication of lesser attacking intent. The method is clear: bat tap gone, bludgeoning is the route. At the same time, its attacking efficiency is also larger. The wide backlift returns an attacking strike-rate of 306 in comparison to the bat tap’s 268, comfortably ranking itself as the most destructive of all the set-ups. There is only one message for the bowlers – if you see the wide backlift, seek cover.

A second thing that invites attention about this set-up is its timing of use. Not once in the record is the wide backlift seen to be used before “settling in”: its average enthronement occurs 7.3 balls into an innings. It may be argued that this is an overestimation because of the number of times Karthik has had to start against spin (and against spin the wide backlift is not used) but this does not ring true. Even in situations where he has started against pace, Karthik has preferred to walk inchmeal. The earliest instance of the wide backlift’s use in an innings occurred after two balls, lending certitude to the claim that it is mandatory for Karthik to “get himself in” and for good reason.

In its entirety, these findings perform two functions: shine light on the delightful bravura of technical elements underpinning Karthik’s magical run of form, and also awaken the bowlers bearing its brunt to the conscious cues he may be exuding before the openly premeditated sweeps or scoops come into effect.

But above all, it shows us that maybe it is the case that form is little more than the perfect coincidence between real and required technique as dictated by conditions, but there is still meritocracy in it because to divine the best technique for a given set of conditions takes genius.