Team India completed a fantastic series win against a brilliant Aussie side at the Chinnaswamy Stadium yesterday. A lot of positives, tons of confidence, and absolute teamwork – these were the pillars that set them apart and eventually securing the silverware. For all the talks surrounding Virat Kohli, KL Rahul, and Rishabh Pant, there was […]
By Saumin Parmar Mon, 20 Jan 2020 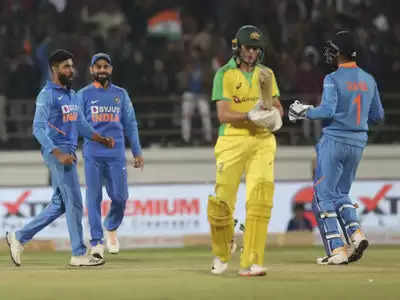 Team India completed a fantastic series win against a brilliant Aussie side at the Chinnaswamy Stadium yesterday. A lot of positives, tons of confidence, and absolute teamwork – these were the pillars that set them apart and eventually securing the silverware. For all the talks surrounding Virat Kohli, KL Rahul, and Rishabh Pant, there was one player who silently flew under the radar but had an impact as anybody else in the telling stages of the game. Have you already guessed we are talking about none other than Ravindra Jadeja?

Prior to the start of the series, there was an air of apprehension on his place and contribution in the ODI setup, or whether he should make way for Yuzvendra Chahal to complete the KulCha combo. However, very little has he done this series that doesn’t restore our faith in him being one of the best in his skills in the world today. And is far, far ahead than the bits-and-pieces tag that he received a few months ago.

Jadeja is almost the perfect all-rounder a team can ask for. Ideally, Jadeja is the one that gives them the cushion of an extra batsman, one who can finish off the innings or give them the final thrust, on what the situation demands.

Statistics may show one thing, but what they don’t show is his utility and presence and the relativity of the situations. He makes an impact during those stages of the game that can’t be written off. He might not be your glamorous icon, but is a superstar in his own right.

Watch him as a batsman and you sometimes feel he doesn’t get the respect he deserves. “He’s probably in the best batting form of his life” said his skipper Virat Kohli on the eve of the 1st ODI against the West Indies a month back.

Jadeja the bowler is a different entity altogether. He is nagging with his line and length, miserly with his economy rate, and arguably finishes his overs more quickly than most of the spinners. The fact that he induces a false shot off a batsman more often that not with the latter trying to break free from his shackles displays his acumen.

He broke the 127-run third-wicket partnership between Marnus Labuschagne and Steve Smith and struck with a Mitchell Starc wicket in the same over. The plans of Australia taking off in the final 20 overs had been hit hard. In the 2nd ODI at Rajkot, he struck crucial blows with the wickets of Aussie skipper Aaron Finch and Marnus Labuschagne.

And who doesn’t love Jadeja when he’s on the field chasing the ball and showing us his acrobats? Do we even need to mention the fielding bit? “If Jadeja can’t get there, nobody can” quipped Sanjay Manjrekar on air during the 3rd ODI as he chased the ball all the way down to the boundary line in a failed attempt.

He was also hailed as India’s best fielder of the decade by one of the experts recently. Be it Jadeja in the inner circle or the outfield, his threat looms large over batsmen trying to steal a single or going for a double. His rocket arm is a deadly weapon that has been unleashed very often with a 100percent result. He covers the ground like nobody else, throws himself around, and holds onto skiers as safe as anyone in world cricket.

The left-hander has been going on in his nonchalant fashion not paying heed to what is being said or written about him. If that’s the mantra for his success and consistency, who’s complaining?