Happy B’day, Sachin Tendulkar: A look at his 10 most unique career records

24th April is the birthday of a man who changed the landscape of Indian cricket altogether. He was one player who affected lives not only in India but most parts around the world for the 24 years he donned the Indian jersey. Sachin Tendulkar was one of a kind and arguably is the best ever […]
By Sahil Jain Fri, 24 Apr 2020 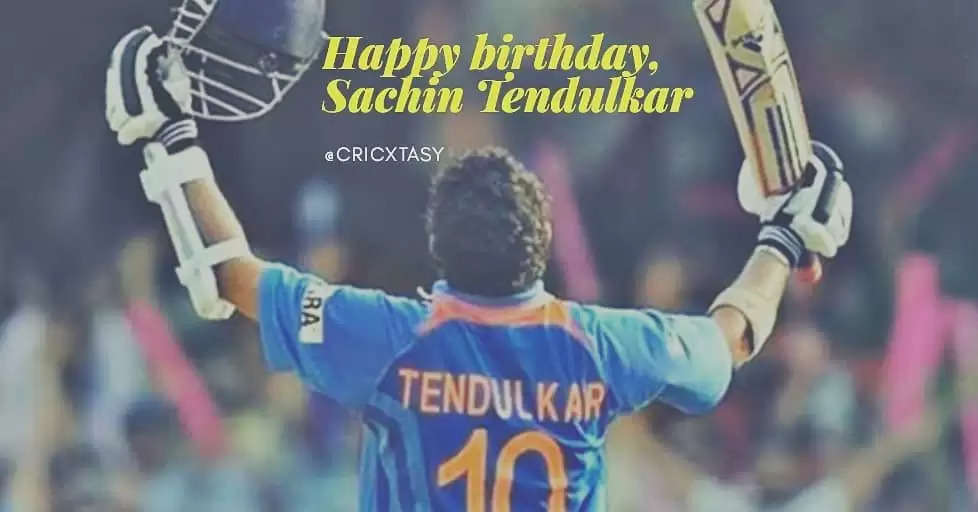 24th April is the birthday of a man who changed the landscape of Indian cricket altogether. He was one player who affected lives not only in India but most parts around the world for the 24 years he donned the Indian jersey. Sachin Tendulkar was one of a kind and arguably is the best ever cricketer to have ever played for India and perhaps, one of the best to have ever stepped on to the cricket field.

Everybody knows that with 34357 runs, 100 centuries and 164 fifties in international cricket, the master blaster is at the top of most batting records. There’s hardly anyone even close to it. The most number of runs, centuries, fifties, man of the match awards, man of the series awards, most matches and the list will go on.

However, as we wish him on his 47th birthday, here are 10 unique and lesser-known facts about Sachin Tendulkar.

#1 – Played with a total of 989 international players, including 141 Indians

#2 – Most Man of the Match awards in a losing cause 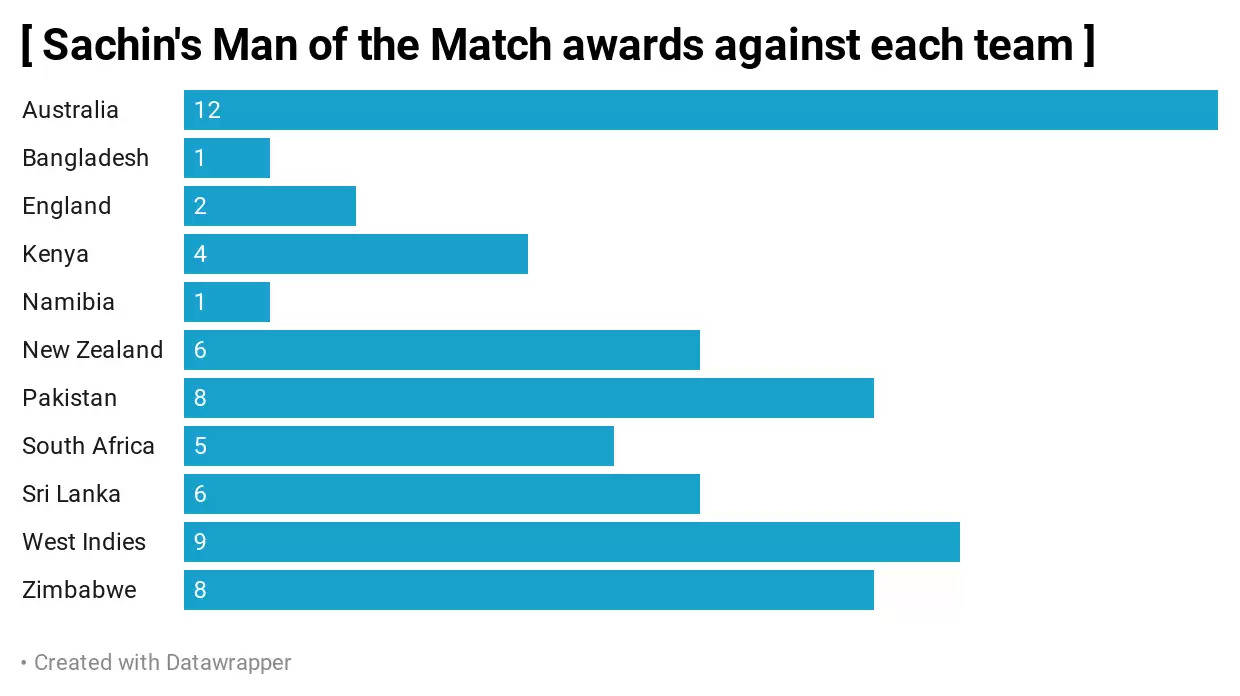 Tendulkar has got more than 2000 fours in both Tests and ODIs and he has the most number of fours in each of those formats. In Test cricket, he has hit 2058 fours while he has smashed 2016 fours in the 50-over format.

As a bowler, Tendulkar had a decent amount of success as well. He picked up 46 Test wickets, 154 ODI wickets and one wicket in T20Is. However, it’s not the wickets but it’s his death bowling skills that have a record in it’s own. He is the only player in the history of ODI cricket to defend six or fewer runs, not once but twice. The first time he defended six runs was in the Hero Cup semi-final in 1993 against South Africa. He conceded just three runs. The next time he repeated the same feat in the Titan Cup against Australia in 1996.

Happy Birthday to the one and only @sachintendulkar ! #OnThisDay in the finals of the Sharjah Cup, Tendulkar made 134 in 131 balls against Australia to chase down 273. #Cricket https://t.co/7gdfLhE0OX

#6 – 19 straight years when Tendulkar has scored an ODI century

Tendulkar made his ODI debut in 1989. However, he took more than four years to get his first ever ODI ton which came in 1994. But once he got his first ton, there was no stopping him. He played ODI cricket till 2012 and in every calendar year, the Mumbaikar got at least one ODI ton. He scored an ODI hundred for 19 consecutive years which is a record. It was in 1998 that Tendulkar got the most tons in a calendar year – 9 which is also a record. 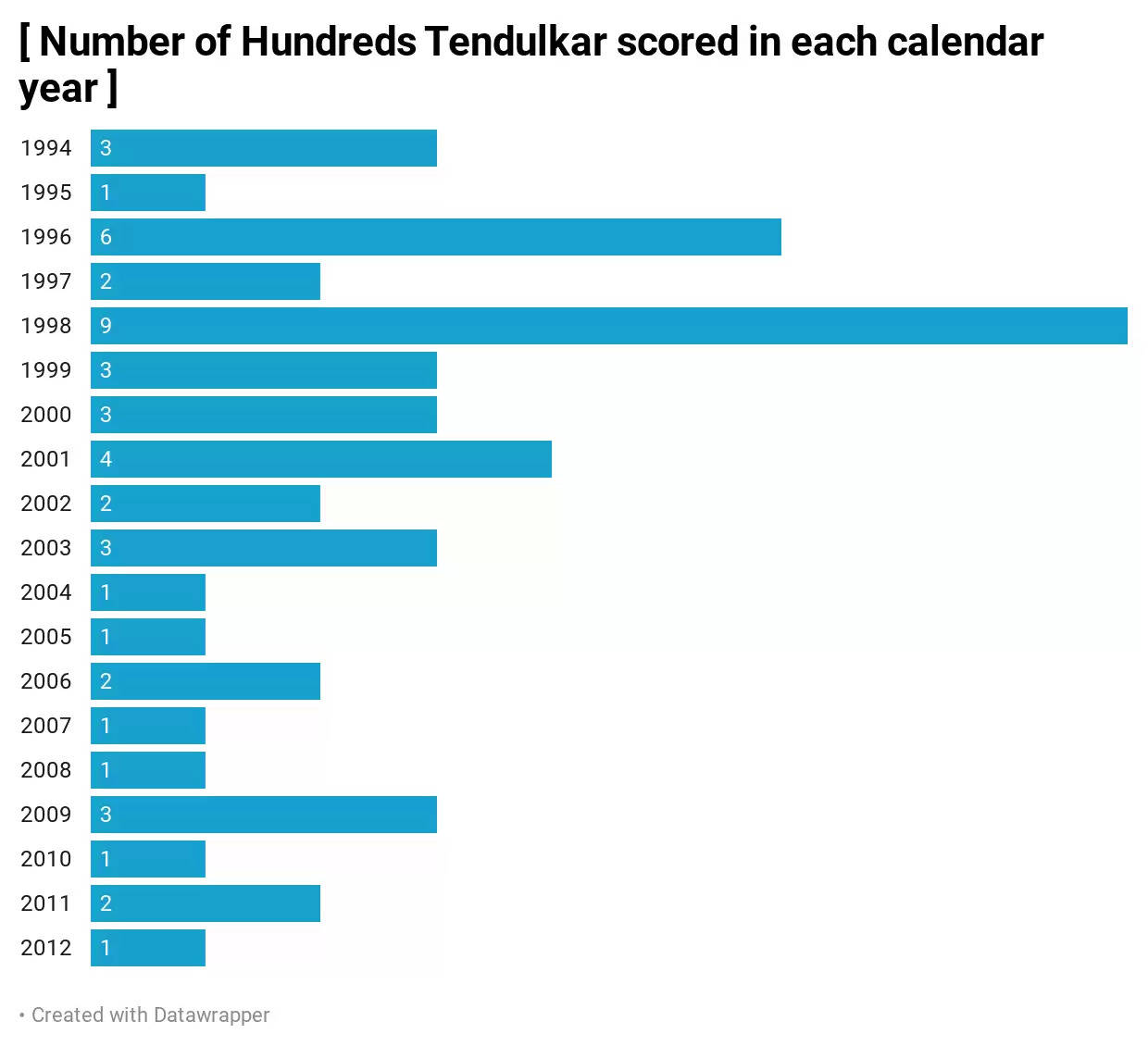 #7 – Highest average for a batsman at a particular venue

It is no secret that Tendulkar loves batting at the Sydney Cricket Ground (SCG). He aggregated 1100 runs at an average of 100 in international cricket there. His Test numbers there are mind-boggling. He made 785 runs in nine innings which includes three tons and two half-centuries. He averaged 157 in Test cricket at the SCG which is the most for any batsman at a particular venue who has played at least eight innings at one venue. In fact, his first Test ton in Australia and first ODI ton in Australia also came at the SCG. His scores at the SCG in Test cricket read – 148 not out, 45, 4, 241 not out, 60 not out, 154 not out, 12, 41 and 80 (latest).

Also Read: Sachin Tendulkar has scored the most number of runs in ODI history

Back in 2004, Tendulkar was on a roll. Bowlers just couldn’t break through his defence and get past him. There was a time in 2004 when he went three innings without being dismissed and it was only after he scored two hundreds and one fifty that he was out. Tendulkar got 241 against Australia at the SCG and in the same match, he got an unbeaten 60 in the second innings. Against Pakistan, he scored 194 not out in Multan – that’s the infamous game when Rahul Dravid declared the innings. However, in his next innings, Tendulkar was out for 2. This accumulated to 497 between dismissals which was a record until Adam Voges broke it in 2015-16 (614 runs between two dismissals).

Tendulkar made his debut at the age of 16 in 1989 against a fearsome Pakistan attack. And just one season later, he started churning out centuries. He scored his first Test ton when he was 17 and never looked back since. Before reaching the age of 20, he had five Test tons, four of them away from home. Each of them were innings where he speared the batting line-up almost single-handedly. These are his Test tons before the age of 20: 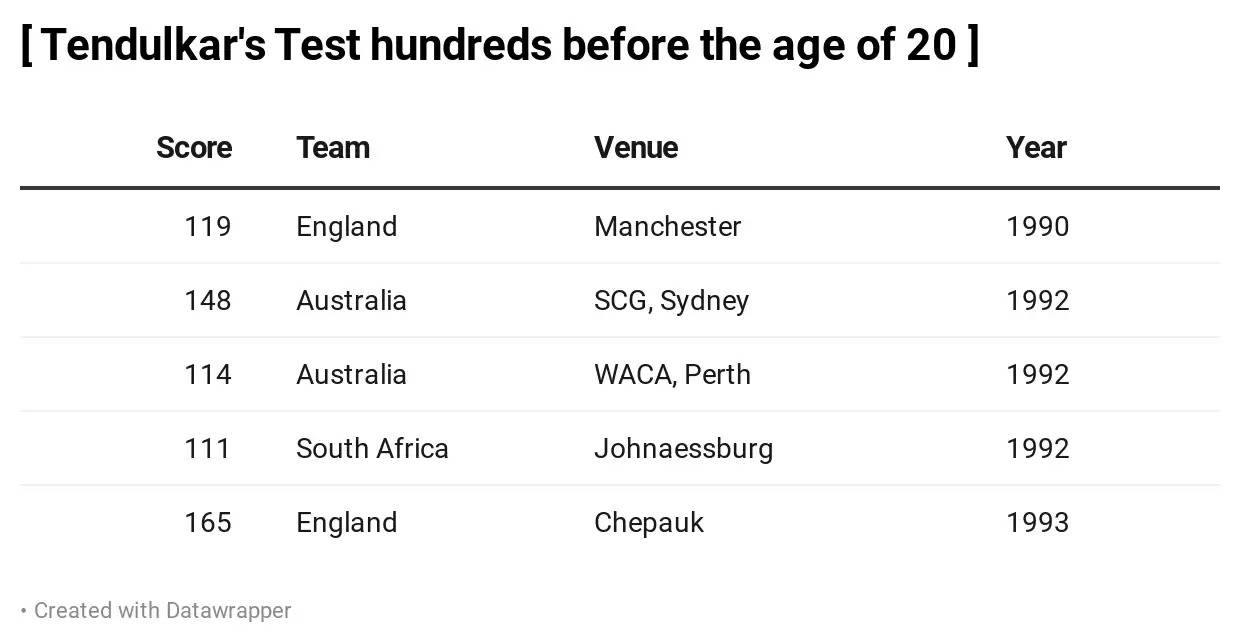 #10 – Reached a Test century with a six on six occasions

Another unique record that Tendulkar has is that he has reached his Test ton with a six on six different instances. That is a record and no other player has reached their ton more times with a six in the history of Test cricket.