Babar, Rizwan smash records to tone down critics, but…

Babar Azam and Mohammad Rizwan scripted Pakistan’s second 10-wicket T20I win - against England on Thursday - less than a year after they had achieved a historic first.
By Roshan Gede Fri, 23 Sep 2022 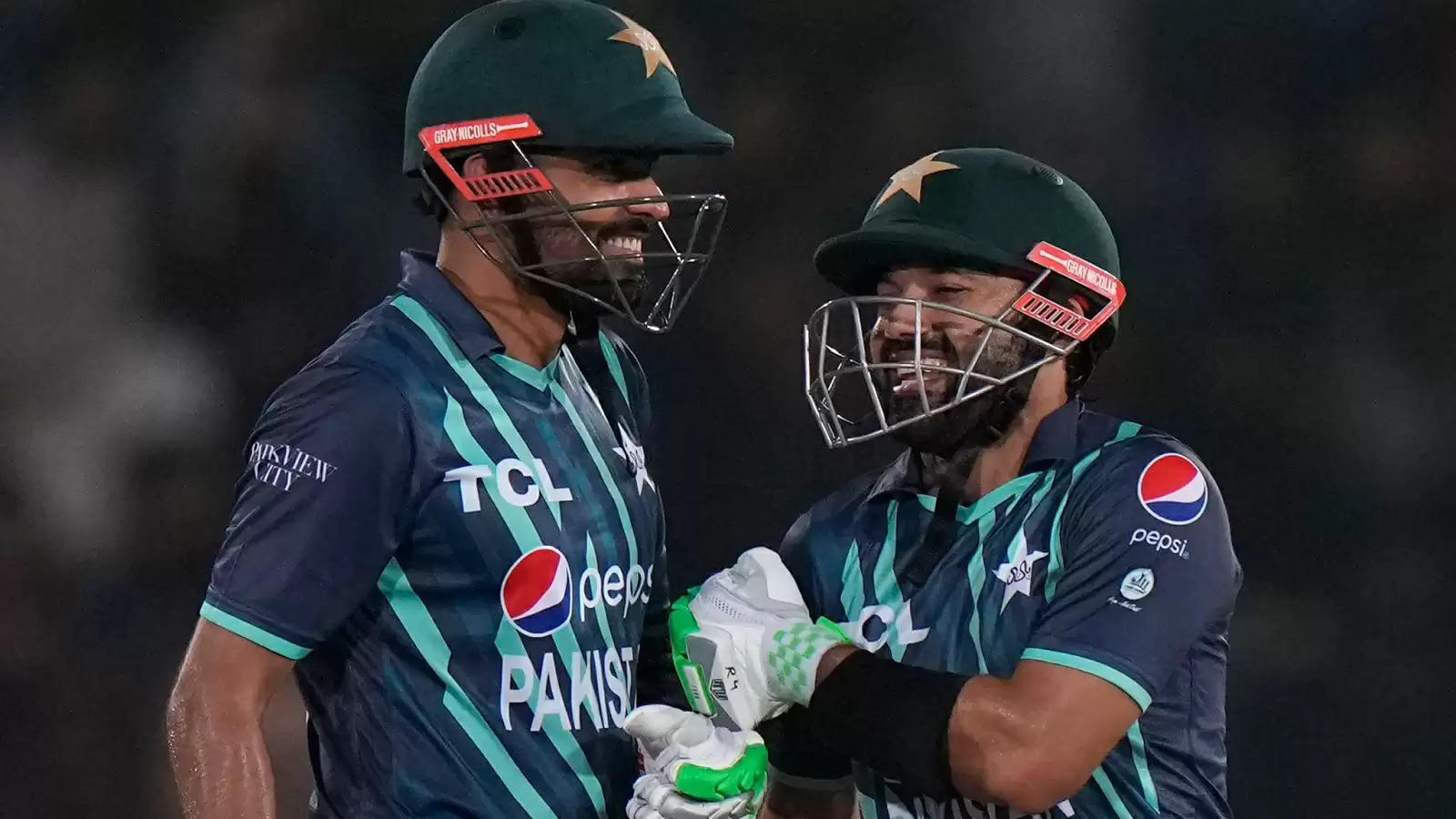 Mohammad Rizwan had his arms aloft, and the triumphant punch of fist was perhaps as passionate as the celebration at the other end. Babar Azam roared in delight as he reached his second T20I hundred off the 61st ball he faced. The usual ‘tap and run’ off Sam Curran to get to the milestone was a bit of an anticlimax to what had preceded, with the pair setting it up for Pakistan’s monumental chase in the second T20I against England in Karachi on Thursday.

Another of Babar’s imperious cover drives sealed the side’s second 10-wicket win in T20I cricket - less than a year after they’d scripted a historic first - against India at the T20 World Cup last year.

Sound on for this one 🔊

Rizwan’s passionate celebration spoke volumes of his camaraderie with the skipper, but more significantly of his own self-belief, with the act coming a day after he’d responded to the criticism off the field. On it, he smashed five fours and four sixes during his fifth 150-plus opening stand with Babar in the format, four of which have come in successful run-chases.

“See, I don't know who is debating about us. This is the first thing. Secondly, even if someone is doing that, may Allah bless him. Because he's not just thinking about me or Babar, he's thinking about the whole Pakistan team,” Rizwann had said on the eve of the second T20I.

“I don't know if it's the former players or the media, but may Allah bless them. But I want to say one thing. To whoever is debating about us, if any of us, the players, is not playing with complete honesty towards Pakistan, he will face dishonour. Whoever is talking about us, if he is doing that out of spite, then he will face dishonour as well. Being honest is our biggest priority.

“They are thinking the best about Pakistan, and we are trying our best as well. I also make mistakes, and I try to do better than that. The captain also tries to improve, everyone does.”

The strong response made headlines, but the criticism was largely justified. Rizwan, the top-ranked batter in the ICC Men’s T20I Rankings currently, had finished the highest run-scorer in Pakistan’s runners-up finish at the Asia Cup 2022 recently, but the strike-rate of 117.57 would come under scrutiny, further amplified by a scratchy 55 off 49 in the final.

In the series opener, the pair had added 85 in 9.3 overs with Rizwan playing the aggressor, but slowed down somewhat after Babar failed to carry on after a 31 off 24 start. Pakistan could add just 73 more in the remaining 10.3 overs, with middle-order struggles being magnified yet again in a six-wicket defeat.

Highest successful chase in T20Is without losing a wicket:

Despite the beauty and the brutality on show in the run-chase on Thursday, the question remains: Can Babar and Rizwan help Pakistan become a dominant force while setting totals?

Chasing has not been significantly challenging in recent times for Pakistan. Their Asia Cup final defeat was in fact, just their third while chasing in 18 completed games ever since Rizwan was promoted as an opener in late 2020. They won 10 and lost as many while setting a target in the same period, including the heart-breaking defeat to Australia at the T20 WC 2021 semi-final.

On that eve against Australia, Rizwan struck at 128.84 for his 67, and Babar at 114.70 during his 39 off 34 in a game wherein runs were scored at nine-an over (150 runs per 100 balls). Pakistan, as is the case for any other T20 side, definitely tend to struggle when both (at times either) fail to carry longer after a slowish start, especially while setting a score.

The overall numbers offer further clarity. The partnership has aggregated 653 runs at 43.53 at a run-rate of 7.86 while batting first, as opposed to 968 at 69.14 at a run-date of 8.54 while batting second. The run-rate gap in the two innings makes for a difference of 13.60 runs (considering a complete T20I innings). It is noteworthy that the first innings run-rate, excluding their 150-run stand of 14.4 overs against England at Trent Bridge last year, drops further to 7.25.

There have been debates of late as to whether the pair needs to be separated to ensure smoother sailing, and add depth to a line-up that lacks middle-order stability. The dominant display on Thursday suggests there’s little wrong with the combination and approach, but it would be unwise of the Pakistan management to overlook the shortcomings from the series opener and the recent past.

Less than 24 hours after scripting the epic, Babar and Rizwan would once again stride out in the third T20I at the same venue. The law of averages and a continual momentum - cricket offers a fair share of both, and the pair has experienced that to the extremes in recent years. Whether they can reproduce the magic if Pakistan bat first remains to be seen.