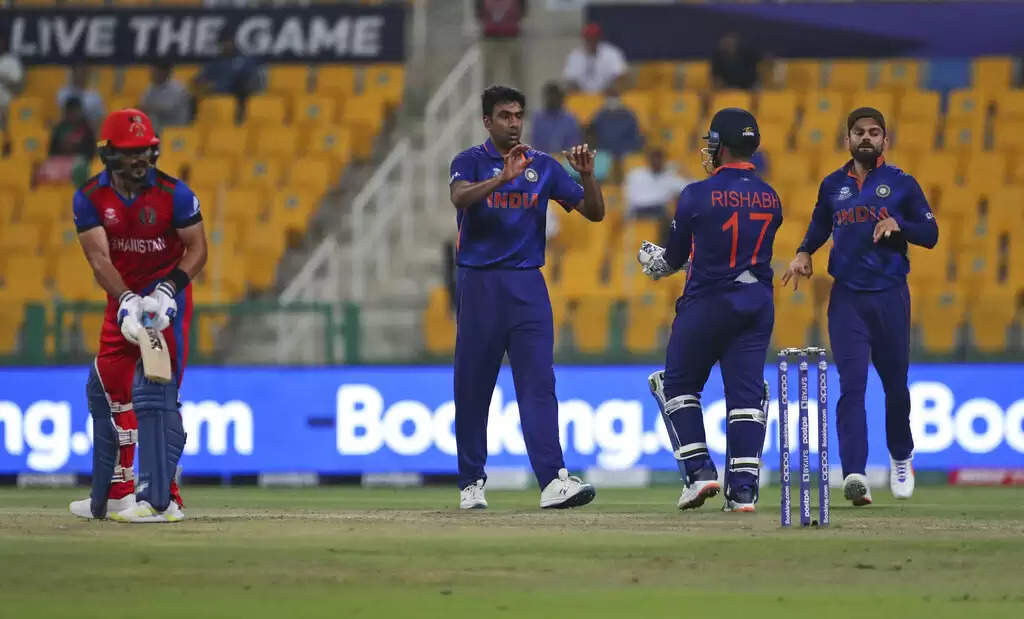 The premier India off-spinner has been an excellent pratictioner of the defensive bowling skills in T20 cricket.

As Ravichandran Ashwin comes in to bowl at Sri Lanka's dangerous middle-order powerhitter Bhanuka Rajapaksa in an Asia Cup 2022 clash in Dubai, former India player Sanjay Manjrekar began narrating the duel from the commentary box for what was a critical juncture in the game.

For Manjrekar, it was important that Ashwin stuck to bowling his 'stock ball' - the off-break - to try and dismiss the opposition left-hander. Failing to retain that classical flight and drift, the experienced commentator felt, would be an error on Ashwin's part against Rajapaksa and would allow Sri Lanka to run away with the game.

What happened on the field, however, was in complete contrast to Manjrekar's assessment. The moment Ashwin floated the ball up as part of his overall set-up, Rajapaksa and his partner Dasun Shanaka were quick to use their feet, trust the trueness of the surface and hit the bowler away. Rajapaksa found a six to deep mid-wicket region, while Kusal Mendis hit a similarly flighted off-break over covers earlier in the innings.

But when the bowler skidded the ball through via a lower trajectory, he found significant leash on run-scoring that was more characteristic of his nature in T20s. Take away those two sixes, and Ashwin had a day's worth of 1/20 off his remaining 22 deliveries in defence of a target that forced Sri Lanka to operate above 8.5 an over.

Yet when it boiled down to on-field action, Manjrekar kept encouraging the bowler to continue flighting and floating the ball up in hope for the turn that wasn't there. Why would a commentator ask Ashwin to commit to a ploy that he had just seen fail?

The quality of the commentary on offer throughout the Asia Cup left much to be desired for the viewer. But what Manjrekar did, in essence, reinforced the gulf that continues to exist between the actual T20 action and how the commentators have talked about it. There is a shocking inclination towards the traditional set of skills that work in Tests and ODIs and deeper sense of disregard or plane lack of understanding for what makes T20 a different sport of its own.

Leading broadcasters continue to employ prominent retired cricketers to hold the mic, which in turn produces tactically misguided commentary for the viewer in T20 because these former players are inherently detached from the format's nitty gritties. The audiences quickly lap up the word of these gents, a scenario that would necessitate careful examination of play for them to deserve their paycheques. But the commentary for T20 is stuck in an ancient era, where there is no scope to understand and respect the concept of defensive bowling skills.

With lower-trajectory being their longstanding bug-bear and wicket-taking held closest to their heart, an average viewer is likely to shape opinion negatively on bowlers like R Ashwin in the shortest format when he or she hears these commentators. Manjrekar & company have failed to recognise and convey why Ashwin landing the ball away from the batter's arc is a mandatory solution to evade the downswing in conditions with no help for the bowlers.

You can't tell the viewer "I would take 3 for 40 any day of the week above 0/24" and expect him to weigh heavy words like hard lengths and defensive trajectories. When you tell him "wicket-taking" is the be-all and end-all of things, you leave the viewer woefully misinformed about T20 bowling.

For commentators, wicket-taking in T20 cricket is to float the ball near the arc and get it to turn or swing with a stock-ball to dismiss the batter in conventional ways. You can't do that as a bowler until you wish to be dispatched for maximums since neither the track offers you grip and turn nor the white Kookaburra carries a seam prominent enough to move laterally in the air and off the deck.

Most T20 surfaces and the overall conditions in which the format gets played force the bowler to mend his ways with defensive bowling skills. As a spinner, constantly compiled dot-ball pressure and keeping the ball away from the arc when the big shot invariably arrives is the surest means to get the batter to find the fielder in the deep, not the boundary.

Why would you tempt the sweet spot of these bulky bats on flat pitches should be the follow-up question to the Manjrekars of the world, when they obsess so heavily in favour of Test match lines, lengths and trajectories and rob the viewer of actual T20 play, in turn leading to a poorly informed discourse about its best practitioners.

It's why R Ashwin's T20 World Cup selection is a triumph of T20 cricket and defensive bowling skills. A constantly evolving cricketing brain, Ashwin was one of the earliest figures to understand and adapt to the demands of the format. Ashwin got mocked when he said, "six well-constructed bad balls could be the way forward in T20", but his prophecy has only come to fruition since.

The "bad balls" Ashwin referred to were a set of six best defensive balls delivered in relation to the surface, the overall conditions and the opposition batter on disposal. Rashid Khan, the single biggest recognised limited-overs spinner in the world, has now built a T20 empire of his own by imbibing this trait. Rashid has kept it dead straight, at a low trajectory and bowled an indecipherable mix of googlies and legbreaks to enjoy remarkable wood over his opponents.

But Rashid is a wristspinner, with the game enabling his success. What Ashwin, a fingerspinner, has managed to do in T20Is and IPL, despite the rules and the playing regulations, make for a great case study around one of modern-day cricket's most excellent spin bowlers. With the game's custodians clamping down on the 'doosra', Ashwin has had to dig deep into his resolves to take the ball away from the right-hander and put a leash on their scoring.

Since his comeback  last year, Ashwin has sent down over 48% of his overs in dot balls and had an economy rate of 6.10 with 14 wickets from 10 T20Is for India. In his overall career, the off-spinner has gone for only 6.81 an over across 56 matches with 66 wickets to his name. 58 overs of these have been delivered in the field-restriction phase, where despite only two boundary riders in place, Ashwin has managed to keep the batters down to a very respectable 7.48 an over.

Against India's sternest opposition in Ashwin's career timeline - Australia, England, South Africa, New Zealand and Pakistan - the 35-year-old has an overall economy rate of 7.40 across 29 matches with 28 wickets. Among Indian spinners, only Yuzvendra Chahal (38) has taken more wickets against this set of oppositions. But he has taken them at 8.54 an over.

In Australia against Australia, a place considered the graveyard for fingerspinners, Ashwin has a T20I economy rate of 7.40 over five matches. No Indian bowler could claim to be as miserly in those encounters, which kinda dispels the perception that Ashwin is ill-suited for an Australian World Cup.

Chahal is one symbolising figure of what warms the hearts of the traditionalists and the current set of commentators on duty for the format. His tendency to flight the ball up consistently gets raved over from the box, with anything else dissed at by those gents.

This, despite him being one of the most expensive T20I spinners around, with a career economy rate of 8.08 after 66 matches. Chahal has been going for 8.28 an over since the beginning of 2019 over 39 T20Is. The 32-year-old is deemed a wicket-taker, when in reality he averages above 30 with a strike-rate over 22 for nearly three years now.

That Chahal has had this dip in his wicket-taking frequency over such a large sample size attests to the nullification or disapproval of his method in this format. And highlights the greatness of Ashwin the T20 cricketer while reinforcing the necessary art of defensive bowling.

At his best, even Chahal plugs it away from the arc and forces batters to drag the ball for scoring options against the turning ball. But he hasn't been at his best for good three seasons now and was one of the major reasons why India crashed out early from this Asia Cup.

That should've compelled gents who hold the mic to revisit what they think, know and tell of the T20 action to the viewer. But we're far from reaching that place until broadcasters command certain specific standards for these former cricketers to achieve with their commentary.

For now, let's celebrate the triumph of R Ashwin and what it means to the art of defensive bowling skills.