Cape Town, Feb 5 (AFP) Quinton de Kock marked his first game as South Africa’s one-day captain with a century and a seven-wicket win over world champion England on Tuesday.. South Africa’s chase was comfortable, though, after de Kock and Bavuma combined to take the Proteas from 25-1 to 198-2 when de Kock was out […]
By PTI Wed, 5 Feb 2020 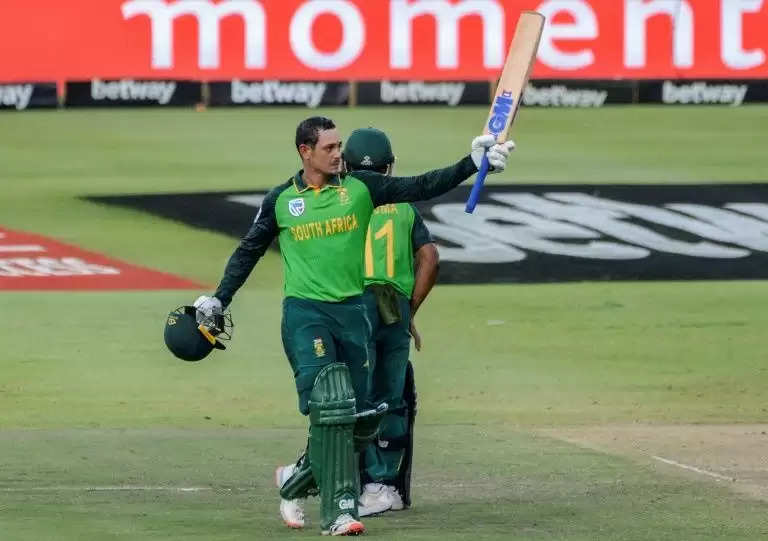 Cape Town, Feb 5 (AFP) Quinton de Kock marked his first game as South Africa’s one-day captain with a century and a seven-wicket win over world champion England on Tuesday..
South Africa’s chase was comfortable, though, after de Kock and Bavuma combined to take the Proteas from 25-1 to 198-2 when de Kock was out bowled by Joe Root for 107.

De Kock and Bavuma shared a second wicket partnership of 173 off 170 balls, dominating an England team which included only five of the side that won the World Cup last year.

De Kock made his 107 off 113 balls with 11 fours and a six, while Bavuma faced 103 deliveries, hitting five fours and two sixes.

“It was a good night. It feels good to get back to winning ways,” said De Kock.

“We had one or two chats about how we want to take this ODI team forward.

Today was a good start — but it’s only one game.” South Africa’s team also had an experimental feel, featuring only six of the squad who had a dismal World Cup.

“We were way off the mark,” admitted England captain Eoin Morgan.

“South Africa completely outplayed us in every department.”

Bavuma made a strong case for a long-term place in South Africa’s one-day team. A veteran of 40 Tests, he had only played in two previous ODIs, both relatively low-key games in which he made 113 against Ireland in 2016/17 and 48 against Bangladesh the following season.

Batting at number three, Bavuma was largely untroubled, hitting the ball crisply, while he and De Kock seemed to have an almost telepathic understanding in their rapid running between wickets.

Bavuma seemed set for a century until he went back to Chris Jordan and was trapped in front of his stumps by a ball which kept low.

“We understood it was pretty difficult to hit boundaries,” said De Kock.

“It was a matter of finding a way to get momentum and we understood that running hard between the wickets was the way to go about it.”

Joe Denly was largely responsible for England reaching what appeared to be a reasonable total on a slow pitch. Denly made his highest one-day international score of 87 and helped rescue England from a precarious 131 for six. He and Chris Woakes, who made 40 in his 100th one-day international, put on 91 for the seventh wicket.

“Every batsman apart from Joe Denly and Chris Woakes struggled to get on,” said Morgan.

“South Africa bowled well, they bowled accurately and used the conditions with slower balls. (Then) the partnership between De Kock and Bavuma we couldn’t penetrate.” (AFP)