Rohit Sharma got a top-edge that flew to the edge of the circle but the two Pakistan fielders collided and almost lost the wicket opportunity.
By Kashish Chadha Sun, 4 Sep 2022 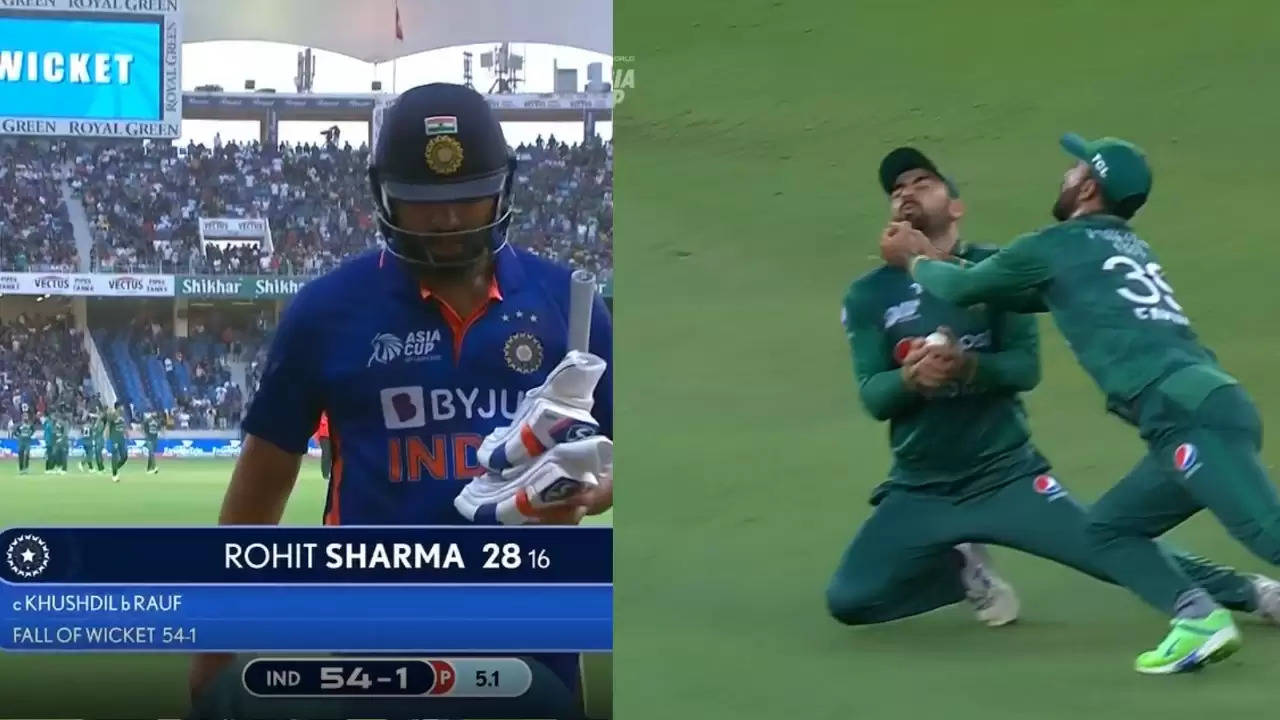 Pakistan nearly made a meal of the catching opportunity that a firing Rohit Sharma offered to them in Dubai.

Rohit Sharma got his team off to a brisk start in the India-Pakistan rematch at the Asia Cup 2022 game in Dubai on Sunday (September 4).

The elegant Indian opener blazed his willow for some delightful strokes throughout his blistering cameo of 28 off 16 deliveries.

Losing the toss on a good batting surface, the right-hander looked intent on ensuring India maximised the field-restriction phase and smashed 3 fours and 2 sixes in his innings.

But just when Rohit Sharma was setting his eyes at a substantial score, the Indian captain got out caught off a top-edge while attempting another big hit down the ground.

Pakistan, though, nearly messed up the catch on offer from the Indian batter with two of their players colliding and almost letting go of an easy opportunity to earn their first breakthrough.

The near mishap is from the beginning of the sixth over in the Indian first-innings batting effort. Facing a full-pitched delivery outside off from seamer Haris Rauf, Rohit Sharma ended up mistiming his attempted big hit down the ground and got a top-edge that flew towards the mid-off region.

Placed there, Khushdil Shah was in for a comfortable catch until his teammate Fakhar Zaman tried to also make the grab in his hands in a school-boy error where none of the two made a call to the other and declared it's "mine".

With his eyes held up, Fakhar tried to fetch for the ball, not knowing Shah is about to take the catch at his position. The two cricketers collided badly, but thanks to Shah not losing his ground, he was able to retain his hold of the ball and give Pakistan the wicket they desperately needed.

After taking the catch, Shah looked towards Fakhar and offered him a grin with a sigh of relief taken by both the cricketers, considering Rohit Sharma's was a massive wicket in context of the match. Batting on 28 off 15 in the middle, Rohit was intent on putting a further dent into the Pakistan bowling plans and make life significantly easier for the rest of the Indian batting unit.